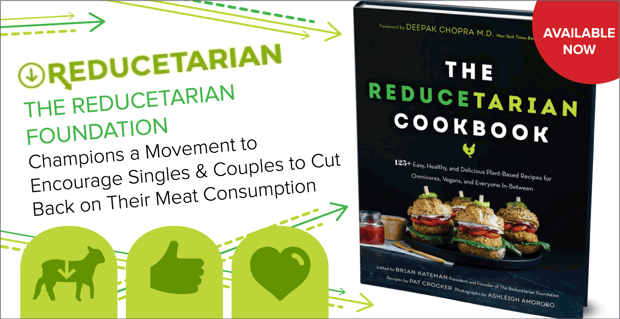 The Scoop: The Reducetearian Foundation is based on the idea that less is more. Reducetarians commit to reducing their consumption of meat, dairy, and animal byproducts while increasing the number of fruits and vegetables on their plates. By setting reasonable goals for themselves, singles and couples can substantially improve their health and have an overall positive impact on the food industry and the environment. Anyone can take the pledge to become a Reducetarian and be more conscious about their eating habits.

Brian Kateman grew up in Staten Island, which he describes as “not the most progressive place in terms of New York City.” His family was a meat-and-potatoes sort of family, and that was just the way things were. Brian didn’t know any vegans or vegetarians until he got to college and began thinking more seriously about what he put in his body and the impact his eating habits had on the world.

Brian Kateman coined the term “Reducetarian” to stake out a middle ground between vegans and omnivores.

Although Brian wanted to protect the environment and stop immoral factory farming, he didn’t know if he could cut out meat and cheese from his life completely.

His girlfriend (who’s now his fiancée) actually helped him embrace new eating habits. She held him accountable for making healthy and moral choices at the dinner table. Together, the couple began cutting back on their consumption of meat, dairy, and eggs by cooking more vegan dishes at home.

Today, Brian said that his meals are 99.9% vegan, but he considers himself a Reducetarian because he hasn’t forsaken animals products from his diet altogether. This is, in part, because he believes our relationship to food is often best served when centered on “aspiration” rather than on “purity.” In other words, he just avoids meat, eggs, and dairy when he can — and that is most of the time.

As a food activist, Brian has embraced the middle ground between eating meat every day and never eating meat again. He pioneered the Reducetarian movement, which reaches out to meat eaters and encourages them to eat less meat rather than giving it up cold turkey.

“People think about this issue in an all-or-nothing way — you’re either vegan or you’re not,” he told us. “That’s a false choice because lots of people care about the world or have compassion for animals, and they would be happy to cut back on their meat consumption.”

Incremental Diet Changes Can Have a Monumental Impact

Americans are among the highest consumers of meat on the planet. The Department of Agriculture estimates that Americans eat about 222 pounds of meat and poultry a year on average. Those dietary habits can harm the health of the individual as well as the health of the world.

According to an Oxford University study, heavy meat eaters in the U.S. have nearly two times as big a carbon footprint as vegetarians and vegans. If a person could cut back their meat consumption from 3.5 ounces of meat a day to 1.76 ounces of meat a day, they could reduce their carbon footprint by approximately 37%. Even small changes could have an overall positive impact.

Reducetarians do their best to eat healthy by avoiding meat.

The Reducetarian mantra is that every little bit helps, and people should be encouraged to do what they can to improve their diets. These food leaders believe that cutting back on meat consumption can be an important first step toward a happier and healthier future, and they support anyone willing to take that step.

“Every single plant-based meal should be celebrated, and every reason for cutting back is valid,” Brian said.

The Reducetarian movement welcomes everyone from baby boomers concerned about their health to teenagers concerned about climate change. Despite their different motivations, they come together under a single banner and commit to reducing their meat consumption.

The Reducetarian Foundation is a nonprofit powered by donations from everyday individuals who care about improving their health and the health of the planet.

Brian understands that real, monumental change has to involve people of all kinds, and he endeavors to be inclusive and serve a variety of needs.

“People can be intimidated by veganism,” Brian said. “If meat is at the center of their every meal, it can be hard to imagine cutting it out completely — so start by cutting back.”

Since its inception, the Reducetarian Foundation has set realistic goals and won people over by meeting them where they’re at in their lives. The nonprofit’s healthy recipes help people incorporate vegetables and fruits in their meals by offering sustainable and healthy alternatives to processed meat.

Brian has edited “The Reducetarian Cookbook” as a support system for anyone who wants to eat healthy at home. The book contains over 125 delicious and simple recipes that highlight vegetables and fruits.

This cookbook could be a great wingman for anyone hoping to impress their dates by cooking vegetarian- or vegan-friendly meals. It offers a lot of recipes for couples to try together during intimate meals at home.

“The Reducetarian Solution” includes 40 recipes as well as 70 essays from health and environmental experts. As an author and editor, Brian has endeavored to publish helpful and practical resources to help people ensure that their diets are consistent with their values.

“We want to inspire people to take action and cut back,” he said. “Whatever your reason for reducing, it all leads to the same path — a world in which food production is sustainable and humane.”

Since 2017, the Reducetarian Summit has united a community of conscientious consumers and explored strategies to reduce meat consumption and end factory farming on a global scale. Over 500 attendees take part in this two-day conference, which offers over 100 speakers, panelists, and exhibitors.

The Reducetarian Summit is full of valuable networking opportunities and enriching educational content. Many people leave feeling inspired by the workshops and fireside chats.

When you’re changing your eating habits, it helps to know you’re not in it alone. That’s why so many couples tackle diets together. They’re uniquely positioned to set shared goals and hold one another accountable for their choices.

“It’s nice to have someone by your side to help you with your diet,” Brian said. “When you’re in a relationship, it’s important to support your significant other and help them become the best person they can be.”

Brian experienced a transformation in his own eating habits when he started dating his girlfriend seven years ago. She introduced him to Thai and Indian food and cooked vegan meals at home, so it became easier to eat right day in and day out. They set goals together, and they encouraged each other to stick to those goals. Today, they’re planning an all-vegan wedding that reflects their values as a couple.

The Reducetarian lifestyle is appealing because it doesn’t expect people to be perfect all the time, and it doesn’t require them to totally abandon their favorite foods. Reducetarians can have a positive impact on the food industry by committing to a healthy and manageable diet that’s right for them.

“In the future, I hope we see factory farming relegated to where it belongs: in the dustbin of history,” Brian said. “But we can’t do it alone. We need as many partners as possible behind this mission.”

As a young adult, Brian realized that the status quo in the food industry just wasn’t acceptable, and he began making incremental changes in his diet to reflect his viewpoint. He and his fiancée have supported each other’s healthy eating habits, creating a closer bond with each other as they work toward a shared goal.

Now Brian hopes to convince all omnivores that cutting back on meat is the right thing to do. Since founding the Reducetarian Foundation, Brian has created recipe books, given lectures, and hosted summits that promote eating less meat as a way of doing more for yourself and the world.

Brian makes the case that the Reducetarian lifestyle is good for people’s health, good for animal welfare, and good for the environment, so people have many reasons to eat a veggie burger every once in a while.

“I feel a tremendous sense of urgency in solving these problems,” he told us. “We have this opportunity to meet in the middle, and I’m excited about the future of food.”