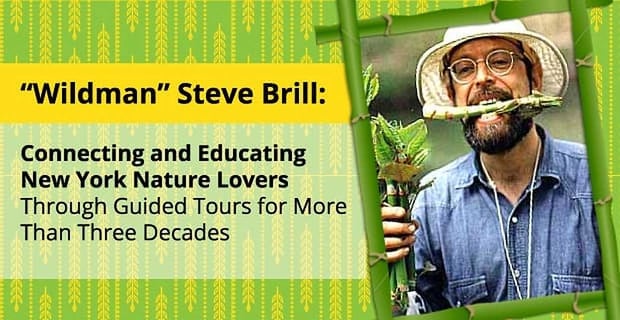 The Short Version: “Wildman” Steve Brill isn’t your average nature tour guide. Rather than simply pointing out beautiful flora and fauna, he teaches nature lovers how to forage and which plants are edible. Steve leads tours of popular parks in New York, Connecticut, and Pennsylvania, and he encourages others to bond over conservation and nature. Steve’s guided tours provide people seeking a way to commune with the environment and meet like-minded nature enthusiasts the opportunity to learn more about the outdoors — while also learning more about each other.

For 37 years, “Wildman” Steve Brill has been fighting to educate the public — and even some politicians — about how we can enjoy nature’s bounty while being ecologically responsible. He’s well-known for his passion for the environment and also for the time he ended up on the wrong side of the law.

Steve was once arrested for eating a dandelion in Central Park because he dared to teach others that the weeds the city frequently mowed and pulled were actually some pretty tasty vittles.

“Wildman” Steve Brill teaches nature lovers how to forage on his walking tours.

But he said his accusers decided to “turn over a new leaf” while he was on trial for criminal mischief for the dandelion episode.

“I served ‘Wildman Five-Boro Salad’ — a collection of locally foraged plants — on the steps of the criminal courthouse to reporters and passersby. The Parks Department ended up dropping the charges and hired me to lead foraging tours, which I did for the next four years.”

With his trademark humor, environmental zeal, and genuine desire to teach the public about eating healthy from a local park or their backyard, Steve has educated and entertained the public with his foraging tours for decades. He runs tours all over the New York area as well as some parks in Connecticut and Pennsylvania. Tours in the city parks are usually four hours long and include a lunch break. Tours outside the city typically last three hours.

The excursions are an ideal day date for couples who love nature — or for singles looking to meet other like-minded environmentalists for a fun, active experience.

“Wildman” agrees that his tours are a great way to meet a special someone who shares your interests. “It’s a good venue for people to meet each other if they like nature, food, foraging, and the environment,” he said.

Get Your Hands Dirty on Interactive Outings

Steve’s tours aren’t just a watch-and-listen sort of affair. A passionate vegan and environmentalist, he wants attendees to build a respectful relationship with the earth, not only learn how to identify plants.

“We walk through the park, and I show them common plants — often removed as weeds — that humans have been using for food and home remedies for thousands of years,” he said.

Steve leads one of his famous tours through New York City’s Central Park.

He also talks about harvesting plants responsibly. He often brings along recipes for the plants he knows the group will find along the way. He drives home how tasty foraged food can be by bringing along prepared versions of recipes.

“I make things that are incredibly delicious with whole food ingredients that anyone can make. They are totally natural and without flour, sugar, and animal products,” he said. The recipes are from his books, app, and on his website.

Discover Earth’s Bounty With Those Who are Like-Minded

In addition to being an experienced nature guide, Steve is a famous forager. As you walk through parks and marshes, prepare to be inspired by his knowledge — each tour is like a college-level primer in botany. He’ll point out which plants are edible, which fungi aren’t, and provide plenty of helpful information in between.

The tours are also never short on laughs, as Steve always brings his mountain of “dad jokes,” expertly timed and delivered. And he especially welcomes singles, as Steve is single himself, and knows that bonding over something you’re passionate about can build a solid foundation for a relationship.

Steve always encourages participants to engage with nature. “I have people pick up the plants, and I show them the identifying characteristics such as if it is circular or oval, serrated or not, or if they come from the ground or a stalk,” he said. “I also talk about food and medicinal uses going back to apothecaries — as well as nutrient content.”

On his tours, Steve shows attendees which plants are edible — and which aren’t.

Steve likes to share his drawings and paintings of plants which combine art and science in an aesthetically pleasing and educational way. His art emphasizes distinguishing characteristics, so people can recognize a plant and distinguish it from others. Participants learn what plants look like in every stage and season, as well as how to harvest them safely and ecologically.

A tour with Steve is much like going to nature’s supermarket. When you see him pointing out sassafras root, don’t be shy — pick some up for later. He’ll likely follow up the information about the root with an easy recipe that sounds perfect for a date dessert.

One of his tour participants, Masha G., had glowing things to say about the tour, and she especially enjoyed the group she shared the afternoon with.

“’Wildman’ Steve Brill is a great educator! He is very engaging, knowledgeable, and has an amazing sense of humor. We went on Steve’s tour of Central Park and had a blast! We also got to meet some great people in the group, so that was a bonus. It’s very refreshing to be around people who care about nature,” she said in a Yelp review.

Join the Garden Club Program for a More Intensive Lesson

Gardeners can meet and mingle through Steve’s Garden Club Program, which is designed to delve deeper into edible plants, the science behind the taste, and conservation. The program is part field walk and part presentation.

“Attendees get to see, touch, smell, and taste representative species of the wild edible and medicinal herbs, greens, fruits, berries, nuts, seeds, roots, and mushrooms that constitute the backbone of our local ecosystems,” he said.

They’re encouraged to bring storage items like bags and containers to take home their finds to enjoy at home using some of Steve’s savory recipes.

During the presentation, Steve approaches wild plants from several perspectives. He begins with plant identification, spending time on key characteristics. He also mixes in concepts from botany and ecology, as well as stories from natural and human history.

Steve infuses his trademark humor and personal experience to drive the information home. He then covers the ethnobotany, or the local culture’s traditions, of plant use for food, medicinal use, and crafts.

You can take Steve’s expertise with you after the tour. His mobile apps — Wild Edibles Forage on IOS or Wild Edibles on Android — provide the knowledge you need for your next foraging adventure with someone special. Pictures, information, and recipes are just a few taps away.

The Wild Vegan Cookbook is one of many books written by Steve.

You can pick up one of the many books Steve has authored. “The Wild Vegan Cookbook” contains many of the recipes he serves and mentions on his tours. He offers free plant and mushroom recipes on his website, too. Using these resources, you can forage together then have a romantic night in cooking your finds.

People often find connections on Steve’s tour, and he thinks it’s because attendees have similar passions. “When people do things together, they bond. They have similar opinions,” he said. “It helps when you have things in common with someone.”

Steve has some big plans for the future which will help people forage more safely and easily. “I’m turning three of my books into ebooks. Instead of having a page of pictures, like a collage of the different stages of the plant, you have a gallery in the ebook,” he said. “You swipe through it and one after the other, full-size, you see each picture with its own caption. There’s actually more material in the eBooks than the print books.”

Or you can find Steve out in his element, hosting tours on weekends and holidays. You may enjoy the rebel urban naturalist so much that you’ll want to make his tours a regular date.