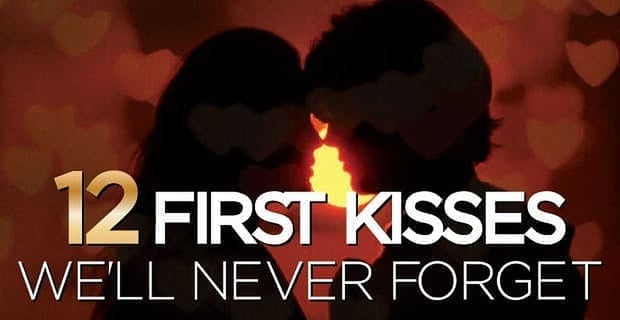 If only real life could be like television or the movies.

Our own first kisses might be charming in their own way, but it’s these on-screen kisses that had us on the edge of our seats.

Episode seven of season two is when Ross found out about Rachel’s feelings for him. The sexual tension had been building all along, and this episode had us holding our breath over what was going to happen.

When he stormed out of the coffeehouse, we were so disappointed that it hurt. Fortunately he turned around and these two shared the first kiss we were dying to see.

11. Westley and Buttercup – “The Princess Bride”

Farm Boy’s affections went unnoticed for so long until Buttercup finally figured out why he was so willing to do as she wished.

Their first kiss in front of the sunset was flawless, though we would’ve liked to see a bit more – too bad it was interrupted by, “Is this a kissing book?”

We thought everything was going to work out perfectly between Josie and Sam when he found out she wasn’t a student, but his anger caught us off guard.

We had our fingers crossed he would show up at the baseball mound, and when he didn’t, we weren’t sure how to handle it. As it turned out, he was just a little late.

As the movie cover says, some things are worth waiting for.

When Luke finally told Lorelai how he felt at the end of the fourth season, their first kiss was perfect and all the finale we needed.

It seemed like Sheldon would never move past his disdain for physical affection, and we assumed his and Amy’s Valentine’s Day date would be no different than their others.

Their dinner date clearly lacked romance…that is, until he found out that’s what Amy wanted. Annoyed, he drank wine, held her gaze and kissed her. We were surprised and thrilled.

It seemed unlikely Sam and Jake would end up together, but we rooted for them anyway. The girl had gone through enough, and she deserved to have the handsome senior with a girlfriend like her back.

As his interest grew, we got anxious. When she saw him outside the church, we were just as excited as she was. And that kiss? We swooned.

6. Michael and Mia – “The Princess Diaries”

We waited and waited for Mia to notice her best friend’s brother had a thing for her. All hope seemed lost when she bailed on plans with him to go to the beach with Josh Bryant.

When he shows up to the Independence Day Ball, we held our breath that something would happen between them. We were rewarded with their foot-popping first kiss.

We couldn’t blame Baby when she developed a crush on the sexy dance instructor – we all kind of had one, too.

When she became his substitute dance partner, tempers and romance both flared until we were on the edge of our seats, wondering when and what was going to happen between them.

Their first kiss was a very satisfying answer to those questions.

When Vivian told Edward she didn’t kiss clients on the mouth, we were a little taken back. How could that be too intimate for someone who sells sex? Edward accepted it without question, though.

When she finally gave in and admitted she had feelings for him, we cheered. When they shared that first kiss on the mouth, we cheered even louder.

Peter’s feelings for Mary Jane were evident from the start, but he seemed doomed to have them go unrequited. After all, MJ was dating Harry.

When she was attacked by The Green Goblin, we thought we saw her interest in Spiderman, but it wasn’t until he saved her from several men in an alley that we got to see that interest thrive in a wet, passionate first kiss.

If we thought it was hard to wait for Ross and Rachel, these two were almost impossible to wait for. When he confessed his feelings, we were horrified that Pam said he “misinterpreted things.”

She spoke to her mom on the phone, and all we could do was wonder what she meant by, “Yeah, I think I am.” She hung up when Jim came in, only to get swept up in this amazing first kiss.

As soon as he saved her life, it became clear Jack and Rose needed to be together.

When he told Rose he loved her and wanted to be with her, we were heartbroken that she turned him away. We were able to forgive her when she apologized, and Jack forgave her, too.

The setting was perfect for them to share that first kiss.