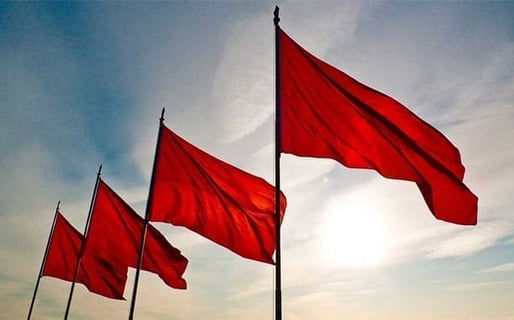 You’re on a date with this guy and he just seems a little off. You can’t tell if he’s socially awkward, on drugs or a combination of the two. It’s in your nature to give people the benefit of the doubt, so you push on ahead.

But when is it time to start listening to your gut and paying attention to the red flags? Here are a few warning signs that need to be heeded — no matter how many second chances you think a person deserves.

1. He can’t keep his eyes focused on you.

If he’s constantly turning his head at every attractive woman who passes by your table, then chances are he’s got nothing but sex on the brain. A man should be on his best behavior on a first date.

If he can’t stop himself from being a womanizer in the first two hours of meeting him, what would the future of your relationship look like?

I don’t care if he turns on the waterworks when he’s telling you about his sick grandma or how his French bulldog needs an operation. If this guy is asking you for money on the first date, it’s a clear indication that he is completely desperate (i.e. he has nobody in his life because he’s screwed them all over) or he is a total liar.

This man you just met is not yours to fix. Get out, now.

“There’s a big difference between being

socially anxious and being a plain weirdo.”

3. He says anything about “love at first sight.”

You’re on a first date and within the first 20 minutes, this guy is hinting at how you two are meant to be. Call it fate, destiny or “love at first sight,” but I call it BS.

Sure, the date might be going really well — the best date you’ve ever been on even — but there is no gain in saying the two of you are going to be together forever. That’s just creepy!

I dated a guy who refused to shake people’s hands unless he thought they were better than him. He wasn’t a germaphobe. He was a dick.

If you’re on a date with a new guy and he is rude to the waitress, cab driver, your roommate, the guy at the convenience store, etc., then he’s showing you exactly who he is. He’s rude and it’s a direct indication of how he will treat you.

Sure, first dates can be awkward. The guy might get really sweaty or use the bathroom one too many times, but there’s a big difference between being socially anxious and being a plain weirdo.

Keep your eye out and stay vigilant for red flags such as lying, rudeness and womanizing.

I don’t care how hard up you are for some male attention, being by yourself is way better than being with a jerk.

How Important is Sex in a Relationship?

What to Do When You Have Nothing in Common with Him