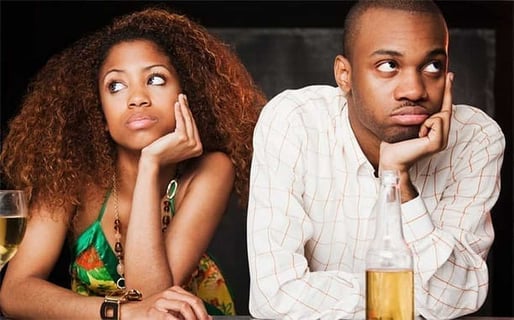 Second Chances: When to Give a Horrible Date Another Go

There are cardinal sins when it comes to first dates — things so inexcusable a second date will never see the light of day. Then there are the things that seem like permanent deal-breakers but after further analysis, could be forgiven. How do you know when to break ties forever? And how do you know when to give it another go?

We’ve compiled a rundown of three first date faux pas and a little insight into the nature of the tactless act or remark. And last, we give a verdict. Does the evidence suggest this guy is worthy of a second chance?

Imagine you’re on a first date and everything seems to be going great. He takes you to a local, farm-to-table restaurant. Brings you a small bunch of wildflowers, opens the car door, pulls out your chair. This guy could be the one! And then as dinner gets underway, said prince is staring at your chest. Not just a quick glance here and there, but he is full on ogling your bosom. Every attempt to shift his gaze from your breasts to your eyes is failing miserably.

No! Unless this guy has some rare eye condition that requires him to stare at women’s breasts for at least two hours a day or his head will explode, toss this guy out with last week’s Chinese food. People could argue the woman was wearing a revealing top or the guy had just gotten out of a 10-year prison stay, but it’s pointless. This guy has no couth. Actually, he probably doesn’t even know what couth is. And he’s probably obsessed with sex.

“You never know, it could turn

into something else down the road.”

Imagine you’re on a first date and the guy meets you at the movie theater to see a new blockbuster action film featuring Vin Diesel. You’re the one who suggested the flick. What you didn’t suggest was he bring his best friend along. Who brings a friend to a date? The guy still pays for your ticket, the soda, the popcorn, Junior Mints and is very sweet throughout the entire evening.

Yes. You’re the dimwit. I mean, you suggested a Vin Diesel feature. What did you think this guy would think? Honestly, this wasn’t even really a date. It was an introduction to a date — a chance to get to know each other in a low-stress kind of way. Definitely give this guy another chance. But be clear next time. A dinner at a nice restaurant is a start.

Imagine you’re on a first date and the guy talks about himself for approximately 89 minutes out of the 90 you spend together. He never asks one question about you. He’s fumbling with words and making awkward hand gestures. After three glasses of wine, he’s slurring his speech. The next day he calls you to apologize and says he just got out of a five-year committed relationship. He hasn’t dated in a long time and was really nervous on your date. You end up having an awesome phone conversation and decide to be friends for the time being.

Maybe. What is your gut saying? This guy can’t be a total loser. There’s a woman out there somewhere who spent five years being his girlfriend. Chances are, he’s still an emotional wreck from the breakup and has no idea how to get back into the dating scene. Be his friend for the time being. You never know, it could turn into something else down the road.

Who Initiates the Second Date?