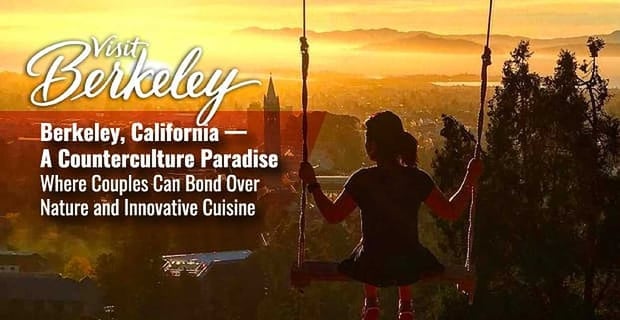 Berkeley, California — A Counterculture Paradise Where Couples Can Bond Over Nature and Innovative Cuisine

The Short Version: With spectacular views of the San Francisco Bay and a one-of-a-kind culture, Berkeley, California allows couples to inject a little romance into their lives. During a trip to Berkeley, you and your date can take part in a diverse set of activities — from attending a free weekend of world music to visiting one of the state’s most beautiful rose gardens. What’s more, Berkeley doesn’t forget its past as a vanguard of the counterculture. The city’s residents are down-to-earth and welcoming, helping everyone feel at ease exploring the city. Whether you want to dine at cutting-edge eateries or explore the city’s fascinating history, you’re sure to create plenty of memories in Berkeley.

In our fast-paced, hectic world, days can feel like they’ve flown by in a blink. You can’t stop time, of course, but experts say if you spend your days trying new things, then time will feel like it’s moving at a more leisurely pace.

In his book “The Brain: The Story of You,” Stanford neuroscientist David Eagleman suggests that our childhood summers seemed to last so long because they involved many new activities. In our adult lives, though, we have fewer novel experiences, so time feels like it goes by faster.

The good news is you can still do new things to make time slow down. When you’re dating someone new, or perhaps want to rekindle the spark in your long-term relationship, vacationing together to a place you’ve never been can make your days together feel longer. Especially if it is a place that has a special and storied culture like Berkeley, California.

The mid-sized San Francisco Bay city has no shortage of unique experiences. Brimming with history, food, and beautiful views, time with your date will slow down so much you might lose track of it altogether.

Groove With Your Date at the Berkeley World Music Festival

Berkeley is known as an arts-centric city, where makers and creators come together to develop their voices. Jeffrey Church, Visitor Services Manager at Visit Berkeley, described the eclectic arts scene in the city.

Visitor Services Manager Jeffrey Church said “Berkeley is a destination that caters to all.”

“It’s both a collegiate town and a mecca for the arts. Berkeley is a destination that caters to all,” he said. “The lack of pretension and stuffiness make Berkeley and its people accessible and down to earth.”

One of the best ways to experience the city’s culture is by attending the Berkeley World Music Festival, held annually in the late spring. Some of the world’s best musicians — many of whom call the Bay Area home — perform as part of the three-day music and arts celebration.

Venues throughout the Telegraph Avenue neighborhood open their doors for free music and performances throughout the weekend. The 2018 festival will host Yassir & the Moroccans (North African rhythms), the Harlan James Bluegrass Band, and the Sikh Heritage Symphony (North Indian classical music), just to name a few.

If you and your partner want to experience new musical genres, the festival gives you the opportunity to hear many diverse performances in a short amount of time.

Nestled in the Berkeley Hills with a fantastic view of the Golden Gate Bridge, the city has no shortage of scenery, and no trip would be complete without spending time visiting the many outdoor attractions.

Jeffrey recommends the Berkeley Rose Garden, which has been a staple since it opened in 1937. The best time to view the garden is in mid-May when the roses are at their most beautiful. “With over 1,500 rose bushes and 250 varieties of roses, the garden gives a fragrant ambiance to really connect with your date,” he said.

The Berkeley Rose Garden has been a fixture of the city since it opened in 1937.

After taking in world music and strolling through a romantic garden, you might want to play a little. Just across the street from the Rose Garden is Codornices Park, where a 40-foot cement slide down the hill will let you hold onto your date a little tighter. Make sure to bring a piece of cardboard or wax paper to slide on.

The Bay area is known for its California cuisine, which is a regional style of cooking that has gained popularity nationwide. In the early 1980s, restaurants started popularizing the use of fresh, seasonal, and organic produce on their menus. Thus, these restaurants highlight the best of the season, using only produce that has reached the pinnacle of flavor. These are the main tenets of California cuisine.

“Berkeley prides itself on being the heart of the California cuisine and farm-to-table movements — and it shows,” Jeffrey said.

If you want to experience a restaurant that epitomizes the style, try Chez Panisse for a fine-dining menu. Popular offerings include an artichoke and new potato salad with mustard vinaigrette and crispy pancetta, and saffron noodles with smoked black cod and preserved Meyer lemon.

Try Chez Panisse for some fine dining, and visit CREAM after your meal for a one-of-a-kind dessert.

But fine dining is not for every couple — or every night. “The culinary spectrum in Berkeley allows for people with any budget to enjoy a romantic meal,” Jeffrey said.

Berkeley is known for quirky, one-of-a-kind eateries like Skates on the Bay at the Berkeley Marina. “With sweeping views of the bay and the San Francisco skyline, a sunset dinner is the way to go at Skates,” said Jeffrey.

Make sure to save room for a sweet treat with your loved one. Jeffrey describes one trip that a couple from London took to several of the city’s notable sweet shops. “The London couple started off their sweet search at CREAM (Cookies Rule Everything Around Me) on Telegraph Avenue.” CREAM is popular with locals because of its unique desserts — custom ice cream sandwiches, with your choice of toppings.

Next, the Londoners set off to Ici Ice Cream in the Elmwood district, for natural and handmade ice cream with flavors like chicory-chocolate walnut and bourbon pecan.

But they knew they couldn’t leave their dessert smorgasbord without visiting the Gourmet Ghetto, a colloquial name for the North Berkeley area of Shattuck Avenue between Rose Street and Hearst that offers up a bevy of tasty restaurants and shops. Love at First Bite, a cupcakery that focuses on old-fashioned recipes, was the couple’s last stop.

Jeffrey explained a big part of the shop’s appeal. “Both batter and frosting are made from scratch, with several recipes catering to gluten-free and vegan diets.”

Berkeley has a colorful and progressive past, and that history is exemplified on Telegraph Avenue. The home of the Free Speech Movement that brought civil disobedience to the civil rights movement in the 1960s, Telegraph Avenue has a new method for exploration and education — a mobile app tour.

“The smartphone tour on the history on Telegraph Avenue gives locals and visitors alike more insight into the city’s legacy of free speech and counterculture ways,” Jeffrey said.

Like an app that covers the history of Berkeley, the city itself is modernizing but will keep its hippie core. “Berkeley changes with the times, but it will also keep its tie-dye soul,” he said..

The city of Berkeley demonstrates an ideology that works for a relationship, too. Whether you’ve been dating for a year or have been married for 30, you want to keep the core of your connection while trying new things to keep your spark alive. And visiting Berkeley with someone special could do the trick.