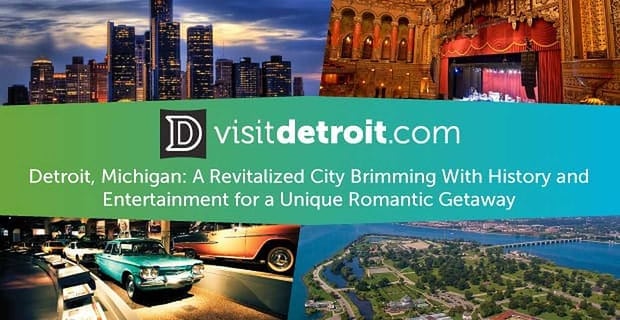 The Short Version: Detroit is a city where much history has been made, from Motown to the automobile industry. In recent years, the Motor City has undergone a massive revitalization, and it’s in the midst of a modern renaissance. With four major sports teams, a continuously elevating culinary scene, new entertainment districts, world-class museums and theaters, plentiful events and festivals, rich history, and an increasing number of outdoor activities — Detroit makes for an exciting destination for couples.

In the early and mid-1900s, Detroit was booming. Henry Ford opened his first factory there, and several other auto manufacturers, like General Motors and Chrysler, followed suit. The city’s population swelled, and Motor City was really put on the map when Motown Records opened its doors in 1959 and began producing major hits.

Over the last few years, new developments and initiatives have expanded the city’s offerings. Detroit’s revitalization is now in full throttle, and the city is brimming with new restaurants, new hotels, and fun attractions — from a riverfront biking path to four professional sports teams to world-class music festivals.

Humming with activity and a melting pot of many cultures, Detroit is ideal for couples wanting a unique getaway. “There are so many things to do and see for any couple, whether you’re just starting out or have been together a long time and want to make a weekend of it,” said Deanna Majchrzak, Media Relations Manager for VisitDetroit.com.

“The food scene really exploded in the past couple of years; we’ve had well over 100 new restaurants in the past three or four years,” Deanna said. Many of these are independent, unique eateries that are ideal for couples who love to plan their dates around food.

One of the most popular newer restaurants is Prime + Proper, an upscale steakhouse perfect for a nice date night and where Deanna said she’s had the best steak of her life. Another romantic spot she recommends is Iridescence, which is located at the top of the Motor City Casino Hotel and has glass windows that provide amazing views of Detroit.

“You can stay at the casino hotel and make a date night out of it,” Deanna explained. “Go play some games, have a great dinner, and they have a great spa there, too, so it’s a complete package.”

The city also has an increasing number of hip little bars and hole-in-the-wall drinking spots. One area, in particular, Deanna recommends is called The Belt, which was an alleyway that has been transformed into an entertainment and dining district. Two fun bars that are great for a date night are The Stand and The Skip. Another fun option is Punch Bowl Social, which has bowling and arcade games.

Detroit is home to a growing number of breweries and distilleries as well, Deanna said, where you can try locally made beer and spirits. There are companies that offer brewery tours, so if you’re big beer fans, this allows you to visit many breweries in one day.

Museums Offer a Taste of the City’s Culture & American History

Detroit has many world-class museums, including the Detroit Institute of Art, which is home to famous Diego Rivera murals.

“You could spend hours in there trying to look at every piece,” Deanna said. To make a date night of it, attend the Friday Night Live Events, in which the museum is open until 10 p.m. and features live entertainment and activities in the galleries. Deanna suggests having a romantic dinner at a restaurant around the corner called Chartreuse Kitchen & Cocktails, and then head to the museum for a performance.

History buffs should head to the Henry Ford Museum to learn more about classic cars and connect with each other.

Music lovers can’t miss an outing to the Motown Museum, which is in the former recording studio of Motown Records.

“You’d expect it to be much bigger than it is, but it’s a tiny little house where all the great hits came out of,” Deanna said. “You can do tours there, and the guides do a really good job — they get you singing and dancing. You actually get to go into studio A where all the hits were recorded, so it’s a really cool experience that you can’t get anywhere else.”

The Detroit metro area is also home to the Henry Ford Museum, which Deanna said takes a deep dive into American history. You can easily spend a whole day together seeing artifacts like the Rosa Parks bus, the chair Abraham Lincoln was assassinated in, and the JFK limo.

Deanna added that you can’t miss Greenfield Village, an outdoor component of the Ford museum that spans 80 acres and takes you through centuries of American history. You can ride a model T or a historic steam-powered locomotive, or step into Thomas Edison’s real lab and the Wright brothers’ home, both of which were picked up and brought to Greenfield Village. In addition to many other famous sites that have been brought there, it’s home to working farms, artisans, and other activities inspired by America’s past.

Detroit has an ever-growing list of events, with options for just about every type of interest. If you’re into sports, you’re in luck: “We have all four of our professional sports teams play within walking distance of each other,” Deanna said. “All three of these arenas are downtown, so you can have a great experience. If you’re really into sports, you can even see two games in one day if you schedule it right.”

If you love live music or theater, Detroit has plenty to offer, including traditional theaters, an opera house, and several large venues like the new Little Caesars Arena, which hosts live performances.

“We have a really extensive, wide variety of different venues,” Deanna said. “So whether you want to go see a Broadway show in a theater or see a concert in an arena, there are a lot of options that would make a fun date night.”

Going to a Detroit Tigers game is just one of the many things sports-loving couples can do.

Other fun activities and annual events take place in Detroit throughout the year. If you don’t mind the cold, there’s Winter Blast in January, which features live music, ice skating, a winter slide, and food trucks. Once things warm up around May, many more festivals take place like Movement Festival — a music festival that brings in world-class techno performers and fans from all over.

During Labor Day weekend, there’s the Detroit Jazz Festival, which Deanna said is the world’s largest free jazz festival. The same weekend, there’s a state fair and a festival called Ford Arts Beats and Eats that celebrates food, music, and the arts. The city hosts River Days, too, which is a festival along the waterfront with concerts, food, games, activities, and a firework show over the Detroit River.

Detroit boasts numerous activities ideal for those who love nature and the outdoors as well. Campus Martius Park downtown is one hot spot for date nights; in the winter, go skating in the park’s ice skating rink and have a cup of hot cocoa together. In the summer, the park hosts free outdoor concerts and movies.

Detroit is ideal for biking because it’s a flat city, Deanna told us. The city’s riverfront has been completely revitalized, so you can rent a bicycle from a bike shop, like Wheelhouse Detroit, and either go on a tour or a self-guided adventure. Bike along the riverfront and up the Dequindre Cut, a former railroad that has been expanded and turned into a greenway.

Detroit is home to four sports teams, including the Detroit Red Wings, whose games can make for exciting dates.

“It’s miles long and connects you to the Eastern Market, so there’s lots of great places to explore by bike,” she said.

Outdoor lovers will also enjoy Belle Isle, a 982-acre island park on the Michigan side of the Detroit River. Deanna told us visitors enjoy exploring, biking, and kayaking there. If you want to sit back and relax, take a boat cruise up and down the river.

The next big project in Detroit’s revitalization is The District Detroit, a 50-block downtown entertainment area under construction. The downtown opening of the Little Caesars Arena in the past year has brought Detroit’s basketball team out of the suburbs and into the city center.

The arena is part of this new district, and when it’s complete, 50 blocks of unused space will have been turned into an entertainment district with retail, restaurants, housing, and hotels.

“There’s going to be a ton of activity and businesses, and it’s going to connect the downtown and midtown area and really just create this huge welcoming, whether you’re coming for a game or just want to hang out outside,” Deanna said. She adds that there will also be over 300 days a year of event programming in the district to help bring people back downtown. The arena’s opening last fall was the first phase of the project, and it will likely be done in the early 2020s.

Other exciting developments in Detroit include the opening of several hip new boutique hotels in once vacant historic buildings. Deanna said several have opened in the last few years, with a handful more scheduled to open in the near future.

One that’s highly anticipated is the fall opening of The Shinola Hotel. Deanna told us Shinola is an upscale watch and bike company based in Detroit, and they’ve teamed up with another local company, Bedrock, to open their first hotel. The development will bring in more restaurants and retail, and they’re going to activate the street behind the hotel and add a restaurant and patio there with lots of fun activities.

This hotel and several others in the works should continue to breathe new life into the blossoming center of Detroit and make it an even more exciting destination for couples visiting the city.