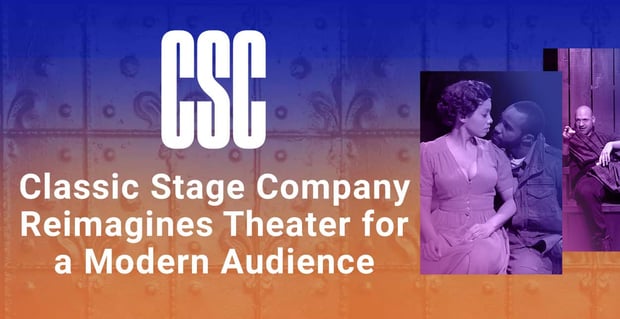 The Short Version: New York City theaters shut down during the COVID-19 pandemic, and virtual shows became a substitute date activity. But now that the stage is up and running again, couples can return to in-person shows at Classic Stage Company, an off-Broadway theater that mounts contemporary retellings of beloved classics. The company produces classics, including “Macbeth” and “A Man of No Importance” with a fresh perspective. Daters can make more of their experience by dining at the theater’s attached café or one of the neighborhood’s many restaurants.

The Classic Stage Company is one of the oldest off-Broadway theaters in New York City. The company was founded in 1967 with the idea that the same actors would perform a different play every night of the week.

In the late 1970s, the company moved away from that model, but the company maintained its ambitious standards of keeping audiences connected to classic theater. Many couples enjoy date nights watching modern adaptations of some of the most iconic stage performances in theater history.

“Every five to 10 years, a new artistic director comes on and has a new vision about what classic works are,” said Phil Haas, Director of Marketing and Communications.

The current Artistic Director is the Tony Award-winning John Doyle, who joined the company in 2016. At CSC, he directed Stephen Sondheim’s “Pacific Overtures” and “Passion,” and Rodgers and Hammerstein’s “Allegro.” Some of his recent Broadway successes have been “The Color Purple” and “Sweeney Todd” with Patti LuPone.

“He’s led the charge in revitalizing CSC’s mission of reimagining the classics for today’s audiences,” Phil told us.

John gained a following for his essentialist style in which theater companies use only what is necessary to tell stories — meaning no superfluous sets or costumes. He stripped away many of the trappings during his tenure. Now, theatergoers see a brick wall and wooden floorboards in the theater, and performances work with that minimal backdrop.

“This is John’s last season with us, but I have a feeling this space will stay intact as it is and that it will continue, because people love CSC,” Phil said. “It’s something that makes us unique as a theater. You get to see the performers up close, and it’s a really intimate space.”

The COVID-19 pandemic shutdown in New York City gave the company time to reimagine how it wanted to conceptualize classic plays.

“We have a podcast where we explore classic plays and how we change the definition of ‘classic’ moving forward — especially in wake of the racial reckoning of the past few years. Is a ‘classic’ always written by dead white guys? The answer is no. We can expand beyond Shakespeare,” Phil told us.

The company also hosts a virtual conversation series during which it invites different actors from film, stage, and TV to speak about their careers or sing songs.

In the current season, John will have directed half of the shows, and the company will bring in guest directors for the other half.

After that, John will turn over the reins to Jill Rafson, who is also committed to modern playwrights writing the classic shows of the future.

“I want to infuse today’s artists into classical works, and yes, of course, that’s going to be from a writing perspective. I’m so excited to do adaptations of the classics, or plays inspired by the classics, from our best voices writing right now,” Jill said of her vision for her upcoming role.

The CSC has a group of devoted followers who will continue supporting the company’s transition to new artistic leadership.

“One of the most touching things we’ve seen happens in the lobby before the theater opens and you take seats. People would gather in the lobby, and the house manager would give a speech about turning off cell phones, keeping masks on, and then they would say, ‘Welcome back to Classic Stage Company, and that always got huge applause. People would holler. It was wonderful,” Phil said.

The CSC is excited to mount its 2022 season after returning from the pandemic shutdown.

The company’s first production is a mystery called “Snow in Midsummer.” The play is based on an ancient Chinese drama about a woman who curses the town that punished her for a crime she didn’t commit.

“The play takes place in modern day, and the curse feels like global warming and things happening now. It’s a curse by this woman, but maybe it’s not, maybe it’s part of everything we’re dealing with as a society,” Phil told us.

The company also plans to produce “A Man of No Importance,” a musical based on a beloved mid-1990s film about an older man in Dublin, Ireland, who is putting on a production of Oscar Wilde’s “Salome” with a local theater group based in a church.

“It’s about love and finding out who you really are. It’s a beloved and a great musical,” said Phil.

Another production in the season will be “black odyssey,” an adventurous retelling of Homer’s “The Odyssey” set in modern-day Harlem.

Individuals and couples who are still cautious about COVID-19 can feel comfortable at CSC. The theater only has five rows that stretch around the theater. And because audiences are that close to the actors, they must wear masks. audiences will need to be vaccinated and masked to attend for the foreseeable future.

“We were lucky in the fall that ‘Assassins’ sold out for 12 weeks, and it was great and no one complained about masks in the theater,” said Phil.

When couples plan a date night out at the theater, the CSC makes it easy to get a pre-show coffee or an after-show espresso at its in-house café, Everyman Espresso. Phil said the café connection makes the theater feel more comfortable.

The neighborhood has many other restaurants just a one-stop subway ride from the theater. Bowery Road offers a vegetable-forward menu and tasty cocktails, including the Zubr Spritz, made with vodka, Italicus Rosolio Di Bergamotto, and sparkling pink grapefruit.

A comfortable night at a venue like CSC is becoming a rarity in New York’s theater landscape.

“It’s a great place to go see a play. It’s so unique, and there aren’t so many stages like it left. You can really have a fun night at the theater. I hope that never changes,” Phil told us.

Guests can continue to expect seasons filled with musicals, historical plays, or something they learned about in English classes in high school — with a modern twist.

“But maybe also a global classic or something we don’t see a lot,” Phil adds.

Even though the company has a 55-year history, the CSC isn’t resting on its laurels. For example, the company is working on making its productions more diverse, and it plans to redefine people’s expectations about classic theater.

“For example, we recently did a fantastic South African version of Stringberg’s ‘Miss Julie’ entitled ‘Mies Julie.’ Sometimes, when you take those classics that people already know, they have certain expectations. But that’s not always the way it has to be,” said Phil.