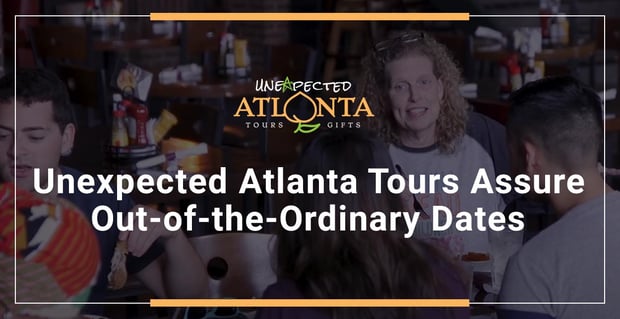 The Short Version: Unexpected Atlanta Tours can surprise couples with experiences that highlight the best of this Southern metropolis. The company offers a food tour of one of the city’s most famous culinary neighborhoods, Grant Park. History buffs can book spots on the King Historic District Tour to explore prominent places in the life of Martin Luther King Jr., who was born and raised in Atlanta. Whether it’s hosting locals or out-of-town visitors, Unexpected Atlanta’s walking tours offer couples new perspectives on the history and future of Atlanta.

In 2009, Akila McConnell was entrenched in her legal career — a profession she’d intended to pursue for the rest of her life. But Akila wasn’t happy and didn’t feel she was pursuing her passion.

So Akila began traveling the world with her husband and writing about her global adventures. She focused primarily on food writing, sharing her work in the Los Angeles Times, About.com, and Condé Nast.

One way she got to know the food in international cities was on walking tours led by experts who shared the history and culture of their local cuisine.

Eventually, she wondered why there wasn’t something similar in her hometown of Atlanta. When she and her husband decided to move back to Atlanta, Akila put her vision into motion, creating Unexpected Atlanta Tours.

Now, the company offers two tours that combine Akila’s love for food and history. The Grant Park Past & Future Food Walk lets participants sample some of the city’s best food. And the King Historic District Tour takes guests to some of the most noteworthy places in Martin Luther King Jr.’s life.

Locals and tourists book the experience when looking for interesting dates.

“We see a lot of couples on dates or celebrating birthdays, anniversaries, and babymoons. We have even had couples take their first dates with us,” Akila said.

Unexpected Atlanta Tours’ original experience is a food walking tour that takes guests through one of the city’s oldest neighborhoods, Grant Park. The area is also home to many of the city’s most innovative restaurants.

Tour guests sample foods at eight locations that offer contemporary and Southern fusion options. Participants who are vegetarian or have dietary restrictions, including allergies or gluten-free nutritional preferences, can also be accommodated. The 2.5-hour tour also takes guests through the historic Oakland Cemetery.

Vegetarians also have a special menu, including fried okra, asparagus, and grits from Six Feet Under.

Tastings change regularly to adapt to new additions to the Atlanta food scene. Akila said she keeps her eyes and ears open when adding a new stop to the tour or when she hires a new guide.

“Serendipity often occurs when I am working on creating a tour, as well, whether it’s finding the right restaurant partner or finding the perfect historical fact, or even hiring the right person. I think serendipity is always around, and we have to be open to accepting it and taking advantage of those serendipitous events in both our personal life as well as our business,” Akila told Voyage ATL magazine.

Visitors and locals may not know how to prioritize their time in the King Historic Area, so the tour offers them a place to start. The tour takes attendees to the Ebenezer Baptist Church and Dr. King’s office in the Prince Hall Grand Lodge. They also visit King’s birthplace and the Jackson Street Bridge.

One aspect of the tour Akila designed is getting walkers off the beaten path to areas they wouldn’t otherwise explore. They visit neighborhoods that some may consider rough but are essential to the city’s past.

Another aspect that sets Unexpected Atlanta apart is its team of exceptional storytellers who bring Dr. King’s legacy to life. Team members — all women — spend almost a year researching and developing each story before presenting it to guests.

One participant shared how impressed she was by the tour.

“Our Guide was informative, personable with all of us, high energy with a great sense of humor! Time went so fast as we tasted the great food and also learned more about Atlanta’s history. I’ve been in Atlanta more than 50 years — and I learned several new things about our history!” she said.

Akila certainly feels she has achieved her goal — the tour was recently included on Condé Nast Traveler’s list of 16 must-do things in Atlanta.

“Prepare to be inspired on the King Historic District Tour, which is meticulously researched by company founder and historian Akila McConnell. On the two-and-a-half-hour walking tour — at about 1.5 miles, the pace is leisurely — you’ll get an up-close look at some of the city’s most important Civil Rights locations and learn little-known stories in the neighborhood. With a maximum of 14 guests — there’s no minimum, so it’s possible you could have the guide’s undivided attention — the experience feels intimate, even when it’s at capacity,” the magazine wrote.

Catering to Both Tourists and Locals

Unexpected Atlanta Tours are an excellent way for tourists to acclimate to the city and learn about its food and noteworthy stops. But tourists only make up about half of the company’s clientele. The other half are locals who want to experience aspects of their city they may have overlooked.

Couples don’t have to physically be in the city to take a tour. During the COVID-19 pandemic, the company moved online and now offers tours remotely. Couples deciding what to do and where to eat on their trips to Atlanta could take a virtual tour beforehand, so they know what to expect.

Couples can order Unexpected Gifts, one of the company’s newest offerings, to remember their Atlanta vacations and tours. The Atlanta Love box, for example, comes with treats like Grits Bits butter cookies, Mama Geraldine’s cheese straws, and a Georgia Love kitchen towel.

After years of operating Unexpected Atlanta Tours, Akila said she is happy she made the shift from corporate law to operating her own business. She’s grateful for the response she’s received from attendees, who have given the tours more than 1,600 five-star reviews on Tripadvisor, Google, and Yelp combined.

With tours covering both food and history, Unexpected Atlanta Tours already shares a significant slice of Atlanta with locals and tourists. But Akila said she isn’t done yet — the team is working on a new tour focused on street art and gentrification in the city.

“We are so proud of the way we showcase this city and turn people who might think Downtown isn’t worth exploring into making it their favorite part of the trip. We love the fact that we can even bring locals who have lived in the city for 30+ years to places they’ve never discovered before,” Akila told “Voyage ATL.”