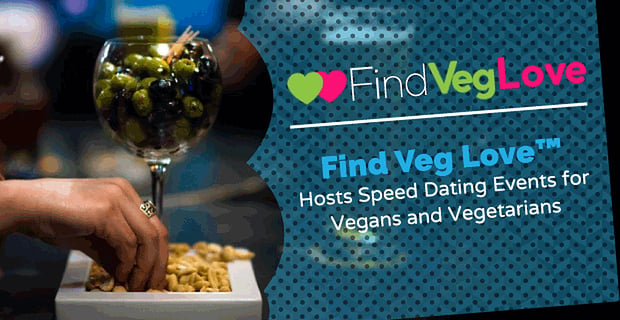 The Short Version: Many vegans and vegetarians find it easier to date someone who shares their lifestyle, especially those who view it as more than just a healthy choice. But when you’re single and looking for love, it can be difficult to unearth those people on traditional dating sites and apps. That’s why Find Veg Love, co-founded by vegans Karine Charbonneau and Andy Brighten, has been hosting vegan and vegetarian speed dating events in North America for over seven years. Most events involve a mingling session followed by several five-minute mini dates, and some are designed for specific age groups. Advanced technology speeds up the Find Veg Love process, so attendees can log their picks on an app and find out who their matches are that same night.

Whenever Karine Charbonneau and Andy Brighten heard their vegan and vegetarian friends complain about the difficulty of finding like-minded partners, they understood. Both of them have been vegan for 12 years and know from experience how hard it could be to find someone with a compatible lifestyle.

After hearing so many friends bring up the same concern, they saw a need for an easier way to connect singles who are vegan or vegetarian. They came up with a fun idea to make those connections a reality.

Karine was a 10-year veteran in the event planning industry, so she decided to try hosting a speed dating event in San Francisco specifically for vegetarians and vegans. The event’s impact was apparent immediately.

“The first night was a huge success, and we actually have a couple that met at that event and ended up getting married a few years later,” she said.

Karine and Andy decided to keep it up. They held similar speed dating events in San Francisco every three months. Two years ago, they branded the company as Find Veg Love and began hosting events across North America. Karine handles all the logistics using her event planning expertise — including booking and promotion — while Andy handles things on the technical end.

Andy said there’s a common misconception that there’s an abundance of single vegan and vegetarian women, but a lack of men. While he said that may have held true in the past, surveys by the Vegetarian Resource Group have proven that wrong.

“They found that, over time, the gender balance has evened out, so that it’s now a myth that there are more women than men in the movement,” he said. “We’re running into that myth pretty often, and we’ve even found the opposite in some cases.”

Find Veg Love works hard to ensure a healthy turnout of both men and women at its events.

“We pride ourselves on running high-quality events, and one of the aspects of that is ensuring we’re not going to run an event with an uneven gender ratio,” Andy said.

Karine and Andy have held events in more than 80 cities throughout the US and Canada.

Find Veg Love hosts events at many different types of venues, but primarily in restaurants, cafes, and bars where there’s a nice ambiance, Karine said. She has relationships with event managers in various cities, and they ensure vegan-friendly menus and marketing resources to raise community awareness to increase turnout.

“We love doing these events; it’s amazing seeing the people come together,” she said. “We have a lot of success stories, including two couples who have gotten married.”

Most Find Veg Love participants are ages 25 to 34, but many participants are in the 35-to-45 age group. While events have traditionally included all ages 21 and up, Karine and Andy have been experimenting with different formats, including holding events for specific age brackets.

In certain cities, Find Veg Love runs events for the 35-to-50 age group, which have been very successful in many places, Karine said. In some areas where there’s a strong vegan and vegetarian demographic, events can succeed with just ages 40 and up.

Spend a Couple Hours Narrowing Down Your Ideal Match

“That’s just to serve as an icebreaker, so people can walk around, talk to each other and start to feel more comfortable,” Karine said. The event manager then covers how speed dating works, and everyone is seated. Attendees have five minutes with each mini date. At the end of the five minutes, the men rotate to the next person, and so on.

There’s a break about halfway through, and then it all starts over again. The event lasts about two hours, giving singles plenty of time to meet a variety of new people.

While Karine and Andy created Find Veg Love to help singles find love, and most folks do show up looking for a relationship, they found that some people also came to the events because they wanted to make new friends.

Before an event starts, the host goes over the rules so participants know what to expect.

“We decided to add that feature, so now you can choose someone as a friend or for dating, and people love it. These events are a great way to meet other like-minded people,” Karine said.

In the early years, Find Veg Love attendees turned in paper sheets with their matches listed at the end of the night. Karine and Andy would manually go through them, enter them into an Excel spreadsheet, and email people their resulting matches, which could take a day or two. Many other speed dating companies still take 24 to 48 hours after an event to process matches and return them to the daters, Andy said.

But he wanted Find Veg Love to return those matches faster, so he built a way to speed up the process.

Vegetarian and vegan daters can feel a deeper connection with those who share their dedication to their lifestyle. Find Veg Love helps connect vegans and vegetarians with like-minded partners through speed dating events. The company also does it faster than most other services because of the custom matching software Andy has developed.

“We figured paper sheets weren’t going to cut it for our major scale-up we started in 2017, so we spent a couple of months developing a custom online version of our match form and a user portal for our speed daters,” Andy said.

With the new system, which is fully smartphone compatible, singles can select matches right on their mobile device while at speed dating events, choosing people as either friends or romantic interests.

Veg Speed Date events have resulted in many relationships and a handful of marriages.

If they’d rather have more time, attendees can fill the form out from a desktop or tablet at home. Find Veg Love’s proprietary system automatically determines match results for each person, and everyone automatically receives their matches at midnight on the night of the event.

“We wanted to ensure we had a technical backbone so we could have events in multiple places going on at the same time. And we’re proud of the system we’ve developed,” Andy said.

In the future, Karine and Andy hope to also bring on professional dating coaches and matchmakers to offer more comprehensive services for vegans and vegetarians looking for love.

Karine said providing these services is an amazing feeling, especially since Find Veg Love is the only one hosting events catering to vegans and vegetarians at this scale. But she said she wants to do even more.

“We want to expand globally at some point; hopefully next year,” she said.