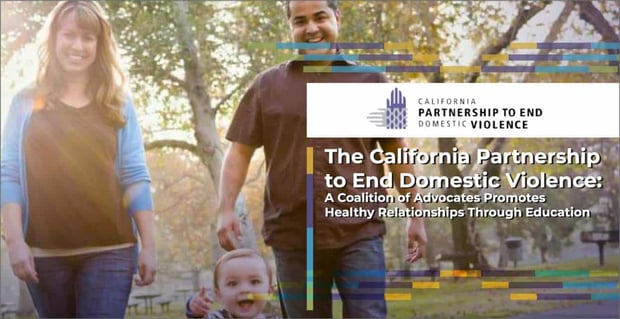 The California Partnership to End Domestic Violence: A Coalition of Advocates Promotes Healthy Relationships Through Education

The Short Version: The California Partnership to End Domestic Violence (the Partnership) has shouldered the task of ending domestic violence in California. It pursues that goal by supporting social change to enhance the well-being of survivors of abusive relationships and starting a dialogue with communities about how to prevent abusive situations in the first place. The Partnership has offices in Sacramento, but its efforts reach big cities and small towns throughout the state. Altogether, this group has lobbied successfully for over 200 pieces of legislation addressing domestic violence.

NFL running back Ray Rice made national headlines in 2014 when a video surfaced of him punching his then-fiancée in an elevator at an Atlantic City casino. His actions led to the Baltimore Ravens terminating his contract, and the news story sparked an impassioned dialogue about domestic violence, masculinity, and accountability.

After his football career had ended, Ray went to counseling and worked hard to turn over a new leaf. In 2019, the California Partnership to End Domestic Violence (the Partnership) invited Ray to sit down with A CALL TO MEN CEO Tony Porter and talk about his experiences with domestic violence. During the Shifting the Lens Conference, Ray spoke candidly about his journey from aggressive athlete to compassionate advocate.

The Partnership has taken strides to put an end to domestic violence.

The Partnership made a bold choice to tell Ray’s story and call on men and boys to recognize the role they can play in stopping intimate partner violence. The nonprofit coalition decided it was important to invite everyone to the table to discuss what domestic violence looks like and how to heal as an individual, a family, a team, and a nation.

In the last few years, the Partnership has begun shifting its work on domestic violence to include whole families. This coalition currently represents over 1,000 advocates, organizations, survivors, and allies, yet it still has room to grow more inclusive and diverse.

“You have to seek outside input to understand what healthy masculinity is,” said Communications Manager Jessica Merril. “We are survivor-centered, and to bring about an end to domestic violence, we need to also work with the people who’ve cause harm in the past and are working on lifelong change.”

An Ever-Expanding Movement Invites Boys & Men to the Table

The Partnership has taken a two-pronged approach to intimate partner violence. They prioritize survivors’ safety and well-being by passing laws and supporting advocates throughout the state. Secondly, the coalition works to foster and promote prevention strategies to keep these situations from happening at all. The agency is both reactive and proactive, so it tackles this complicated problem from both ends.

The Partnership is working to shift the conversation to address the cultural and social norms that perpetuate unhealthy behaviors found in intimate partner violence.

The Partnership’s goal for 2019 is to raise $50 million in state funding.

According to the Partnership’s experts, any effort to prevent intimate partner violence has to begin by understanding its root causes in how we learn to communicate feelings as children. Upbringing plays a critical role in this area. Children may be exposed to unhealthy relationship models from the adults in their lives, which can shape the way they view their relationships and express themselves. Boys and young men are especially vulnerable to unhealthy expectations associated with their gender — being tough all the time and not showing emotions.

Studies have shown that children who are spanked tend to exhibit aggressive and violent behavior when they grow up. Children who see their parents solving problems through violence may carry that lesson forward in their lives.

To stop intimate partner violence, advocates are engaging parents, educators, coaches, and young people in discussions about healthier ways to communicate, express their feelings, interact in conflict, and respect bodily autonomy. They create a safe space where Californians can work toward a more equitable society where people are leading healthier relationships with each other.

One example of this work includes supporting preventionists in the program Coaching Boys into Men, created by Futures Without Violence. This internationally acclaimed approach enlists coaches’ support in modeling healthy masculinity and relationships. It is backed by powerful evidence. In a study by UC Davis, young men who participated int he program said they were more likely to interrupt abusive behavior from a friend, and they were significantly more likely to take action to stop it.

Over the last 40 years, The Partnership has successfully advocated for the passage of over 200 pieces of legislation, and it continues to rally support around legislative measures that support its vision of ending domestic violence.

The coalition offers many valuable resources that can help advocates and preventionists better understand the dynamics of abuse and get access to community-driven solutions. With support from the Partnership, member organizations across California provide compassionate, effective, and experienced guidance for locals struggling with the impact of an abusive relationship.

Explaining the coalition’s Domestic Violence Housing First model, Miranda said, “We meet survivors where they’re at and give them support even for things like driving them to appointments. Having another person there to help makes a huge difference, and I’ve heard from so many advocates how deep their conversations and relationships can be.”

This approach allows survivors to secure safe, stable housing as quickly as possible. Piloted by eight organizations in 2016, 95% of survivors who participated in the Domestic Violence Housing First program said they felt more hopeful about the future.

Over 1,000 advocates and organizations work together to empower survivors.

Financial stability is a primary focus for The Partnership because money is often one of the power dynamics at play in an abusive relationship. Having a steady income or a savings account means having the power to leave a partner who may be the breadwinner in the family.

“You need to be financially stable,” Miranda said. ” A common reason survivors don’t leave is because of finances.”

Program Specialist Alejandra Aguilar added, “We need to teach healthy financial habits from an early age. We need to talk about money as a means of prevention.

The Partnership pushes for access to employment benefits, including paid family leave and paid sick days, to support survivors who have children and are shouldering parental responsibilities alone. Specifically, the coalition works with partners like the California Work & Family Coalition to increase knowledge and use of paid leave among low-wage earners and immigrants. Access to paid leave helps reduce intimate partner violence by reducing financial stress, increasing equity across parenting practices, and promoting child/parent bonding.

The Partnership shines a light on these important issues and raises awareness about what practical steps lawmakers, nonprofits, and other groups can make to support social change.

How Increased Funding Can Have a Long-Term Impact

Although The Partnership always accepts donations, it relies primarily on state funding and grants to drive its actions and support the 1,000 advocates in its network. While Governor Newsom’s May budget revision didn’t include provisions for prevention work across California, there is still time for it to be included. The final budget will be released in June.

“Our field is constantly in a state of flux with funding,” Miranda said. “Right now, we’re asking for $50 million in ongoing intimate partner violence prevention funding because prevention is an ongoing process.”

In 2018, the state of California invested $5 million in one-time funding for the Family Violence Prevention Program, and 14 organizations across California are using those funds to change the social norms contributing to domestic violence by doing grassroots work in high schools and their communities. There is also an organization leading a statewide campaign.

The Partnership is powered by trauma-informed advocates who work closely with survivors.

“The challenge is that prevention is hard to see, and it takes time,” Program Specialist Alejandra Aguilar said. “It’s very much a long-term impact. It’s a hard sell because people want to fund something where you’ll see an immediate impact.”

The Partnership has been making a difference slowly but surely through its prevention work, and the organization now seeks to expand its reach with a greater state investment. This could significantly improve access to support communities, especially in rural parts of California.

The Partnership is committed to investing in the future by expanding its preventative measures and reaching out to diverse communities throughout California. This organization is in it for the long haul, and its methods are more focused on developing a cure than slapping on a band-aid.

“Our goal is to end domestic violence in California,” said Jessica. “It’s a really big goal, but we believe we can do it through our public awareness, capacity building, and policy work, specifically with a focus on prevention.”

California’s congressional leaders have yet to throw their full support behind the Partnership’s prevention efforts, so the coalition depends upon everyday Californians raising their voices and getting involved to fill the gap.

By underscoring the importance of prevention, The Partnership hopes to gain momentum in the struggle against domestic violence and raise a new generation of loving, supportive, and equitable relationships.

Since 2014, Ray Rice has allied with the Partnership and other organizations working to end domestic violence. After years of introspection and self-growth, this person who previous used harm has grown into an agent of social change, educating football players of all ages about the importance of masculinity and personal accountability.

Over the years, The Partnership has invited many different voices to join the discussion about domestic violence and make progress toward long-lasting solutions. This advocacy team is always striving to change minds and change laws so that intimate partner violence becomes a thing of the past.

Whether it’s supporting advocates in their work to help survivors in difficult circumstances or  creating opportunities for teenage athletes to talk about their feelings, the Partnership takes comprehensive action that can help people lead healthy lives and foster balanced, respectful relationships.

“We are an ever-expanding movement,” Jessica said. “By sharing information and resources, we’re all building the capacity of the field to meet survivors’ needs. We want to ensure we’re an equitable organization that raises awareness and empowers Californians to take action.”