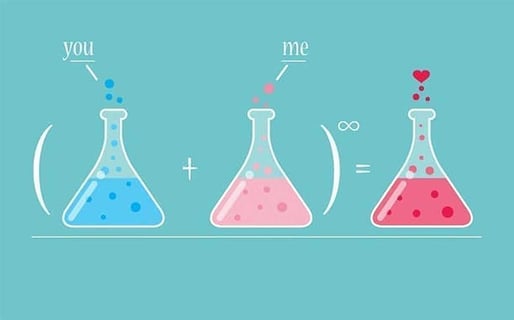 Bad news folks. Hot sex is one of the worst false advertisements out there. It gives new lovers the delusion that they have found the perfect relationship. When sex drives are in sync and dopamine is flooding through neurotransmitters, idealistic thoughts cloud judgments.

Lovers can’t quite help but believe that this relationship will last forever. Within weeks women hear wedding bells and imagine a romantic honeymoon. That’s because huge releases of the female bonding hormone, oxytocin, are produced during female orgasm.

But sexual intimacy is a poor substitute for the real glue of a relationship — emotional intimacy. And there is a dark side to hot sexual chemistry. Passionate, mind-blowing sex can also mean a passionately messy breakup.

Unfortunately, this outcome is much more likely than Mr. Hot N’ Heavy putting a ring on it. Research and statistics prove that “sexual chemistry” does not predict a successful relationship, but rather a short-lived one, usually followed by a relationship hangover filled with sobs and cartons of Ben & Jerry’s.

“Delaying sex will allow you to build

a relationship based on compatibility.”

Sexual involvement — now often initiated by women — in the early stages of a relationship are quite common. Most single men and women view it as a way to confirm sexual compatibility before they commit to a partner. And when the sex is great, lovers erroneously believe it will keep their relationship hot and spicy down the road and even in marriage.

The first mistake with this theory is that women confuse sex with feelings of love, while love is created by a lot more than hot sex. If you think that just because the sex is hot, your relationship will be a full of happiness and bliss, think again.

Researchers from Brigham Young University, who are experts on sexual timing in relationships, have found that the longer a couple waits to get in between the sheets together, the better.

They have better sexual chemistry, relationship quality, relationship communication, relationship satisfaction, and perceived relationship stability in their marriages. These results appeared even after controlling for variables such as number of sexual partners, religiosity and education level.

Good sex shouldn’t be hard for couples to figure out.

But the tools to build an intimate bond and a lasting commitment will take a bit more work. Early sex complicates the message you are trying to send to a potential mate, unless you’re just looking for a summer fling.

Delaying sex will allow you to build a relationship based on compatibility, similarity in values and good communication. Your best bet is to hold off sexually until you are sure that your partner is committed (monogamously, of course) to your relationship.

And the longer you wait to have sex — try and give it at least one month — the better your chances of relationship survival.

25 Best Dating Sites with No Payment or Subscription