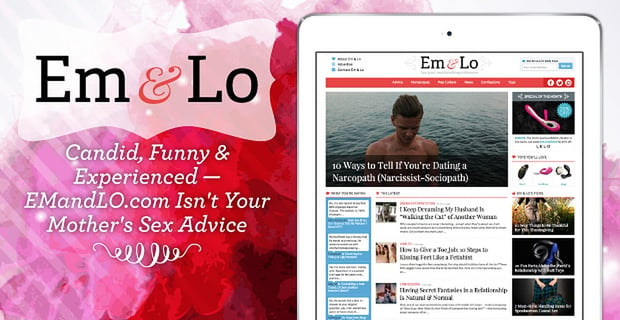 The Short Version: Known as “the Emily Posts of the modern bedroom,” Emma Taylor and Lorelei Sharkey, simply known as Em and Lo, put a hands-on, humorous, and honest twist on your typical sex advice. From award-winning books and a popular site, EMandLO.com, to a 10-episode U.K. TV series and personalized product reviews, these two friends are redefining what it means to be a sex, dating, and love expert.

It seems like everyone and their mother offers sex advice nowadays, but Emma Taylor and Lorelei Sharkey were doing it before it was cool… and even acceptable. Em and Lo, as they go by, know that to be a trustworthy resource for sex advice, it takes more than just living in a big city, talking about it with your three girlfriends, and having a laptop.

Blending humor, real-life experience, and authenticity in a way no one else does, Em and Lo have been pioneers when it comes to talking about sex, dating, and love for more than 17 years — first on Nerve.com and then their own site, EMandLO.com.

“There aren’t a lot of places where you can get this kind of information that isn’t either porny or totally cheesy,” Lo said. “When you come to our site, you’re not going to be bombarded by lots of cheese or titillation or women being objectified in salacious photographs.”

Recently we spoke with Em and Lo to learn more about their unique approach to sex, love, and everything in between, including how they find the balance between being playful and informative, not to mention realistic, with their articles, books, and reviews.

“SEX: How to Do Everything” Takes the Shame Out of Getting Advice

It can be difficult to admit when you don’t know something, especially when it comes to sex. While some might try to fake it till they make it (pun intended), Em and Lo want people to stop feeling embarrassed and start getting excited to learn about sex, which is why they wrote the book “SEX: How to Do Everything.”

“Sex: How to Do Everything” makes learning about sex fun.

This unique sex manual breaks down everything there is to know about sex for “people who like having sex, who want to have more, and want to know how to do everything better” in a fun, not clinical, way. “SEX: How to Do Everything” also features more than 300 beautiful pictures by renowned fashion and portrait photographer Rankin.

“It covers a lot of stuff and does so with photographs and illustrations that really spells things out, but it does it in a sophisticated way,” Lo said. “While we still have a little sense of humor in there, it does feel elevated and sexy.”

Em added that they’re hoping to get people past the idea that learning about sex takes the sexiness out of it.

“To me, the idea of reading a sex manual together can be foreplay,” she said. “It can be a sexy thing. It’s something you can do together. It’s not something you have to hide under your bed and be embarrassed about.”

Humor Makes It Easy to Talk & Read About Sex

Sex is often a topic people steer clear of — usually because they’re embarrassed about what they like or their perceived lack of know-how. This means it’s important for the people delivering the advice to be conversational, like talking to a friend, which is exactly what Em and Lo do.

“Some people think that to ask for sex advice or read sex advice is admitting some kind of weakness or admitting you’re in a rut,” Em said. “We found that humor is a good way to break down barriers and make people comfortable with subject matters that they might not be so comfortable with.”

While humor is Em and Lo’s way of getting people to talk about sex, they also emphasize respect, safety, responsibility, and ethics in the bedroom.

Em and Lo use humor in their writing to make talking about sex just like any other conversation.

“We definitely write about things that would make most people blush, that make ourselves blush, but we take a hard line when it comes to honesty and infidelity and that kind of thing,” she said. “We say there’s no such thing as ‘normal’ and ‘bad’, as long as everyone consents, but that doesn’t mean you get to break rules, like being faithful to your partner if that’s what you promised.”

It’s this kind of attitude that contributes to Em and Lo’s success and makes them stand out. While most sex columnists won’t discuss things like prostate massages or doing it with a vampire, no subject is off limits with these two, making them relatable to almost everyone and expanding their reach.

“150 Shades of Play” Clears Up Misconceptions About Kink

“Fifty Shades of Grey” was and still is wildly popular, but according to Em and Lo, E.L. James didn’t exactly get it right when it comes to kink. So they addressed those concerns with “150 Shades of Play: A Beginner’s Guide to Kink,” their first self-published book.

“150 Shades of Play” hilariously calls out some questionable moments in “Fifty Shades,” like using cable ties on someone’s wrists or taking a drunk girl to your apartment without her consent. Instead, Em and Lo go into real kink practices, including role playing, dirty talk, spanking, and proper bondage, while also acknowledging that it’s a serious and sensitive subject.

“150 Shades of Play” highlights the flaws in “Fifty Shades of Grey.”

Em added that there’s a distinct difference between couples who genuinely make kink part of their lifestyle and couples who just like to do it on a Saturday night, something “Fifty Shades” failed to note.

“We wanted to explain that you can take the elements of ‘Fifty Shades of Grey’ that are sexy to you and incorporate them into your relationship without having to tell your partner how often they should work out and that sort of thing,” she said.

Em and Lo started writing about sex toys before you could just order one on Amazon, establishing themselves as experts early on in the game. Mixing in smart and witty advice with the review, they take a Consumer Reports approach.

Em and Lo take a Consumer Reports approach to their sex toy reviews, looking at every detail.

From the packaging and what the toy looks and feels like, to if it’s good for the environment and can be easily cleaned, Em and Lo do in-depth research on every item and only recommend companies they would use themselves.

“From the very beginning, we’ve focused on the importance of finding sex toys that are good for you and that work, and to stay clear of novelties and find toys that are safe and come with instructions,” Em said.

Em and Lo immediately formed a tight bond when they met almost two decades ago. In 1997, Lo was an editor at Nerve.com, a literary online magazine known as having “the New Yorker’s brain and Playboy’s body”, and Em came on board in 1998.

Em and Lo met in 1998 and have been dishing out awesome sex advice together ever since.

They both began working in Nerve’s community space, offering sex, dating, and relationship tips together on the message boards. People loved their funny and opinionated viewpoints and their advice grew so popular that the natural progression was to start their own site.

A successful website, 7 books, and a TV series later, Em and Lo have only just begun. As their lives change (both are married and have a daughter and son), they’ll add more content to reflect that, like how to make a long-term relationship work and find time for sex after kids, but the honesty and sass will always be there.

Em and Lo are making huge strides in the space of sex, dating, and love columnists, carving a new way of doing things and making people rethink what good advice really is, and we can’t wait to see what they do next.