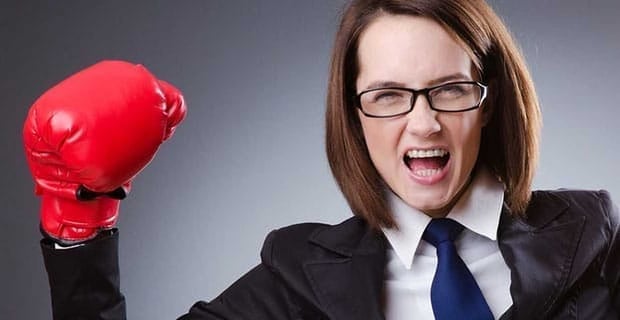 Few women like to get into fights with their boyfriend, but even fewer women like to lose a fight with him. With the right mindset, you can dramatically increase the chances of coming out on top of any argument you and your man share, but before you aim to dominate, there’s a question you need to honestly ask yourself first.

Are you really right?

In the heat of an argument, everyone thinks they are right. When you’re in the middle of battling with your man, you will become so convinced that your perspective is superior to his that you just can’t let him win, and his rebuttals do nothing but convince you more and more of your superior position.

But feeling like you’re right doesn’t always mean that you actually are right.

Fights tend to bring out all sorts of powerful emotions that can short out your sense of “right and wrong” and make it feel like you’re locked in a moment of life-or-death verbal combat. These emotions can stir up everything from buried memories, to fears that if you lose this fight, you will lose all of your power in the relationship. More often than not, fights start to become about a whole lot more than whatever you were fighting about in the first place.

When you find yourself caught up in the heat of the moment, you need to take a step back, cool off, relax as much as possible, and evaluate whether or not you really are right about this one specific thing you and your man disagree on. If you realize you’re fighting for all the wrong reasons, then you need to admit this, to yourself and to your man, and allow yourself to “lose” the argument.

However, if you really are right about this matter, then you need to keep your cool head and convince your man of this fact.

“Men will cling to inaccurate positions even

after they know they’ve been beat.”

Defeat him with logic.

You will never convince a man of anything based on how either of you feel.

When men argue, they tend to argue from what they consider to be a logical position. They use facts, hard projections and other similarly cerebral resources to convince themselves, and their women, that they are right. Men believe emotions play a very small role in their decision-making process, and feelings certainly don’t have any place in a debate.

While this is clearly not true (as men obviously get emotionally engaged when fighting with their women), if you’re going to defeat your man’s arguments, then you need to do so with this attitude of cool-headed logic.

Back up everything you argue with data, hard facts, defensible information and clear thinking. When you take apart your man’s position, do so by explaining how his information is wrong, how he has overlooked something tangible, or how his position otherwise doesn’t make as much sense as he originally believed.

Will appealing to logic win you every argument with your man? Not at all! You don’t need me to tell you that men are stubborn, and men will cling to inaccurate positions even after they know they’ve been beat. But that doesn’t mean you shouldn’t always try to win your arguments, and appealing to logic will provide you with your best offense when you know, beyond all doubt, you really are right.

How to Meet Single Men Over 40