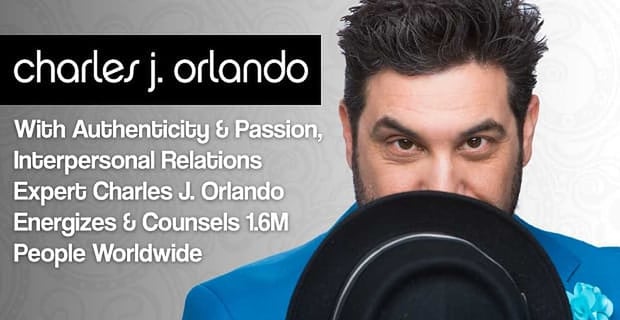 The Short Version:  Relationship expert Charles J. Orlando says that for relationships to succeed, men must evolve beyond their primal instincts and sometimes selfish needs. He has made that transformation in his own life and seeks to help others do the same. Charles intends to change what it means to be a man by speaking his truth and showing people a better way to trust, connect, and commit. His private coaching sessions, bestselling books, and impactful social media posts advise singles and couples on important emotional issues that can make or break long-term relationships. By truly listening to men and women, Charles learns and grows a little more every day, so he can share compassionate love lessons with an engaged audience of 1.6 million people.

In his youth, Charles J. Orlando was more interested in the seduction game than the end game. He describes himself as a morally challenged guy going after the easy score instead of the long-term relationship. Then marriage and children arrived and his priorities changed. With a totally new mindset, Charles began working on himself to become a man worthy of more than just a short-term dating situation.

Today, Charles is an experienced relationship expert with tons of authentic insights into the world of dating, relationships, marriage, and interpersonal relations. He made his journey without a guide, and now his life mission is to help others along a similar path of self-improvement. He is a veritable library of love knowledge.

Published in 2008, Charles’ first book, “The Problem With Women… is Men,” gave him a chance to positively influence singles and couples around the world. Just like that, he was a lauded dating authority. He began writing love-focused advice to share perspectives on dating with men who are trying to evolve beyond the pickup artist and with women seeking to understand the psychology of dating.

Over time, Charles’ following grew by word of mouth until he had amassed a huge online base of over 1.6 million people. Every day, he posts free informational content to inspire his fans on social media. You can follow him on Facebook or Twitter to join the love-focused movement. Charles has become so popular and trusted in the dating industry that A&E Networks tapped him to co-host “Seven Year Switch,” a docu-drama that challenges couples to reinvigorate their failing marriages using a radical therapeutic technique called “switch therapy.”

With a background in theater, Charles enjoys being in the spotlight on the show, but he’s also thankful for the opportunity to share important romantic takeaways with a wider audience.

His work in entertainment reflects the work he does every day behind the scenes with ordinary men and women seeking extraordinary changes in their love lives. In his private coaching practice, Charles encourages singles and couples to do the real work required to make a relationship last.

“I want to change the way people see their relationships,” he said, “and get them to work on themselves and the things they can control.”

Charles is a guide, not a problem solver. He told us the most important work lies between his coaching sessions when his clients internalize his advice and change their dating patterns. He doesn’t sugarcoat how hard it can be, saying there are no quick steps or easy shortcuts. His informed opinions and empathetic frame of mind push daters to look deep inside themselves for the answers they need.

“They have to think of their own solution and put it into action,” he explained. “People need to come to their own wake-up call, and it’s my job to help clear that space.”

Charles makes himself constantly and consistently available to anyone in need.

Working with Charles means making a commitment to learn new skills and correct negative dating patterns. Charles requires his clients to commit to at least three months of individual sessions.

His private coaching program is a long-term investment in long-lasting results. Most clients stay with him no longer than a year, learning what they need to know and then moving forward on their own.

To make his coaching more affordable, Charles also hosts group sessions a few times a year. His approach to these sessions is grounded in the real-world research he did to write his book “The Pact: Goodbye, Past. Hello, Love!” Instead of placing blame externally, Charles challenges his clients to tackle their own personal issues — whether it be low self-esteem or feelings of dependency — to positively impact all their relationships.

The people who come to Charles for help are primarily mature individuals facing serious issues in their relationships. About 50% of his audience is between 35 and 50 years old. These soul-searching adults benefit from a grounded perspective on their affairs.

“I’m a no-bullshit guy. I’m really straight up,” the relationship expert said. Through in-depth sessions, Charles aims to tell the truths his clients need to hear. He offers a compassionate yet objective sounding board for daters who have lost their way.

“I don’t have a persona. I’m just me,” he said. “Tell me what’s going on, and let’s see if I can offer some perspective to help your situation.”

Being a gentleman will never go out of style as far as Charles is concerned. This authoritative relationship expert doesn’t believe showing your partner you value them is cheesy or old-fashioned. His self-help books encourage men to cultivate their inner gentlemen — and advise women to seek out gentlemanly partners.

He condenses his knowledge into more easily digestible free content in his online Love Lists. From how to spot a narcissist to rules to finding lasting love, Charles condenses his deep relationship philosophies into easy-to-read lists.

In “The Problem with Women… is Men,” Charles seeks to raise the bar of what “being a man” means.

“If nobody listened, I’d still be doing this,” he told us. “I’m just doing what I feel I must do. And if people like it and want me in their lives, that’s great.”

Fortunately, many people are listening and they do like it. In fact, Charles’ social media posts see an average of 4,200 likes and 350 comments. He actively engages with his online audience, posting four to six times in a day to make sure his fans have an endless supply of free advice from a seasoned expert.

Hundreds of thousands of people have opted in to hear from Charles on a regular basis. He occupies the space where technology, interpersonal relations, and love collide, offering sage advice to make life better. In his posts, he doesn’t pressure his readers to buy his products, but simply shares his thoughts in hopes of inspiring change in people from all walks of life.

“Trite as it may be, I’m trying to get people to see their lives differently,” he said. “The magic behind my writing is I never know what I’m writing the next day because I’m listening to people and learning from them.”

As thank-you messages pour into his inbox, Charles is continually humbled to play such an important role in people’s lives. He works hard to equip his clients to handle emotional issues on their own so they don’t rely on him or his advice for too long. In his coaching, he wants to cut the apron strings at the earliest possible moment.

Though it’s hard to say goodbye, he lets his clients know when they’re ready to leave the nest and quit coming to him for weekly sessions. Once he’s done the advising and hand-holding, he transitions out of people’s lives, telling them they can always come back if they need a refresher. “Most don’t come back,” he said, “and that’s my overarching goal.”

Every day, Charles sends out positive messages to uplift singles and couples everywhere.

During his one-on-one consults, Charles offers the tools for interpersonal success, and then he frees his clients to build their relationships from that framework.

Meanwhile, on social media, tens of thousands of people write in asking for advice. Charles doesn’t have an assistant deal with these personal queries. It’s all him interacting directly with the people who need him most. He inspires people with wise sayings like: “Love is not sacrifice; it is understanding” and “Far too many men show women the importance of passion, gratitude, and empathy by providing too little of all three.”

One single mother described a toxic relationship with a drug addict and said she felt she didn’t deserve anything better — until she came across Charles’ message of empowerment. She began dating someone new, someone who valued her needs and desires. “Your advice helped me realize that I had found the man of my dreams,” she wrote in a Facebook message. “I have a quote from you that I framed and put up on my wall that we keep as our relationship motto.”

The universality of Charles’ insights resonates with daters seeking understanding and consolation. Charles thinks of himself as a Sherpa leading others through rocky relationship terrain. “I don’t make the climb,” he said. “You climb, and I’ll be next to you helping you scale that mountain.”

Once he abandoned his destructive path of manipulation and self-gratification, Charles realized what truly matters in life. He made a conscious effort to improve himself, understand relationships, and be the best man he could be. And he’s still on that journey.

“I’m just a guy. If you want advice from a perfect person who never makes mistakes, I’m not your guy,” he said. “What distinguishes me as a relationship coach is that I’m transparent about my humanity. I’m still growing and learning and hopefully getting better each day.”

Whether he’s talking a couple through their issues or acting as wingman for a shy single, Charles supports daters on their own journeys of self-fulfillment and growth. His one-to-one and group coaching provides a solid foundation for relationship success, and his frequent social media posts spur people on in the search for love.

“My goal is always the same: to get people to fire me as quickly as I can,” Charles said. “The work has to be done between you and your partner. So work with me to change your communication styles, and then let me go.”