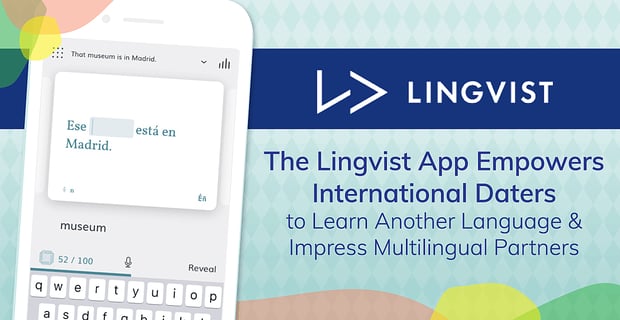 The Short Version: The Lingvist app offers people an effective system to learn French, German, Spanish, Russian, or Estonian vocabulary. This international company has set out to revolutionize how adults learn a foreign language, and it’s making inroads by applying AI technology to its fast-paced learning program. Daters can use Lingvist to find the right words to sweep that special someone off his or her feet in five languages.

My high school Latin teacher would kick off the first day of class by handing out blank packs of index cards as if they were party favors. He said the students who made their own vocabulary flashcards and reviewed them regularly would be the most successful in his class. I took that challenge to heart.

I started by using my flashcards as bookmarks to help me gain familiarity with brand-new words. When I got a word right three times in a row, I’d level it up to the flashcard pile by my toothbrush. I reviewed this pile twice a day. After I got a card right seven times, it’d go to the pile by my computer, and I’d flip through these words about once a week.

The Lingvist app provides a mobile learning program that helps people learn vocabulary faster than they could on their own.

Soon my Latin vocab tests became a breeze, and I excelled in statewide Latin competitions. My success caught the eye of a nerdy classmate, and we used our group study sessions to bring the romance back to the original romance language.

Learning a language alongside a crush can stimulate conversation, and modern technology has made it even easier to build those long-term connections in their free time. Lingvist, a powerful language learning app, uses the science of memory to empower people to learn French, Spanish, German, Russian or Estonian vocabulary words quickly and permanently.

Lingvist has thousands of words in its database, and it presents these words in a uniquely engaging way. The app uses a series of repeated flashcards to get words into one’s long-term memory. The flashcards provide context for each foreign word and give users the option to “speak to answer” and test their pronunciation.

Thanks to Lingvist’s helpful tools, anyone can learn how to speak, read, and understand a foreign language proficiently and apply their vocabulary to real-world scenarios.

As Chief Growth Officer Scott Dodson said, “Language is really social. If you don’t speak the same language as the people around you, it’s easy to feel cut off and isolated, and that is s strong motivation to learn a second language.”

The Lingvist team aims to help people learn a language 10 times faster than they could on their own. The Lingvist app will accomplish this by using big data and artificial intelligence to stimulate memorization. The app shows flashcards in a deliberate way to get them to stick in your mind. It repeats the words you don’t know at regular intervals until you start getting them right consistently.

This is by no means a one-size-fits-all course. The program tailors flashcards to individual learning levels and shows users the words they need to learn without recycling words they’ve already mastered. Lingvist’s unique approach can help users quickly build their vocabulary in a second language, which can be useful to daters in a variety of situations.

Maybe you want to impress a bilingual date by picking up a few key phrases or maybe you want to become fluent enough to make friends and pick up dates in another country. Lingvist can be your wingman in these endeavors and help you make a romantic connection by speaking a foreign language.

The app focuses on vocabulary comprehension and doesn’t go in-depth on grammar rules, so it works best for people who have a basic foundation in a foreign language and want to expand their skills by learning more useful vocabulary terms or for those who simply don’t like to get caught up on grammar rules and like to learn inductively — meaning users learn by observing examples and discovering rules on their own.

“The cards are the heart of Lingvist,” Scott said. “The first word will be the same for everybody, but the algorithm quickly tailors itself to the individual.”

Mastering a Language Leads to a World of Opportunity

Lingvist Co-Founder Mait Müntel felt inspired to create a language learning app after living in the French-speaking part of Switzerland for years. The Estonian physicist saw for himself how difficult it can be for adults to pick up a second language while working full time. Mait is very much a numbers guy, so he decided to approach this problem from a mathematical perspective and use machine learning, language statistics, and cognitive science theory to improve the learning process.

The folks at Lingvist have put their heads together to streamline the process of learning a language.

Today, Lingvist employs a worldly team of 40 people who are passionate about learning technology and community building. Their work has impacted many people’s lives, and they have heard back from teachers, students, couples, and many others who have said that Lingvist gave them the extra push they needed to learn another language.

One high schooler in Arizona used Lingvist to work on his German so he could travel to Europe after he graduated. He ended up learning the language well enough that he was able to woo a German woman who is now his girlfriend. He currently attends university in Germany and has seen many doors open to him because of his language skills.

Many Lingvist users have a specific goal in mind when they sign up. They want to learn another language so they can communicate with a loved one, travel the world, or ace a test. Scott told us the most disciplined users see the quickest results on Lingvist. The app can give people essential learning tools, but it can’t do all the work it takes to become fluent in a language.

“It’s valuable for people who are consistently motivated to learn another language,” Scott said. “The app can give students a structure to learn, but it still takes effort, and you get out of it what you put in.”

If individuals make the time to review words for 10 minutes a day on Lingvist, they can expect to see their language skills grow rapidly as they learn one word after another. “My conclusion is that this is a wonderful app, especially suited to reasonably intelligent learners,” said Helen Myers in a blog post.

The Course Wizard Will Help You Focus on Romantic Words

Lingvist is primarily an adult learning app, so it doesn’t do much hand-holding. It provides flashcards and expects the user to do his or her part to review and learn them. The team wants people to learn fast, but they also want that knowledge to last, so the app reinforces old words while introducing new words. This process gets more targeted and intelligent as more people use it every day.

Lingvist offers many tools and challenges to support users reaching their language goals.

“To improve the app, we need lots of people learning on it, so we can learn from them,” Scott said. “Essentially our goal is to continue honing the algorithm so it gets better at giving you the words you need at the frequency you need them.”

The team continually brainstorms new ways to impact the learning space and make it easier to master a new language on your own. One of their current projects involves creating targeted lists of words for users. Lingvist’s Course Wizard is still in beta testing, but the idea is to allow all users to create their own courses on precisely the topics they are interested in and share them with the community.

“Learning words that are relevant to the individual is a key aspect to motivation and sticking with it,” said Lisa Ockinga, Head of Learning Experience at Lingvist. “Allowing people to learn exactly what they want to learn and harnessing their creative power to create their own courses — whether it’s dinner conversations, compliments, or even contraception or pregnancy vocabulary — has been the vision of the Course Wizard.”

That means people could create lists of compliments to shower upon their dates or lists of food-related words to help them navigate the grocery store. Scott told us educators currently use this tool to help their students learn niche vocabulary, but they plan to expand its functionality in the future.

The Course Wizard can create courses based on any subject matter — from music to love to astronomy — and give people a targeted way to study the words they come across and use most often in real life.

Lingvist Unlocks the Future of Learning

I lived by my note cards in high school, and still have quite a few Latin words floating about in my head, but it was about more than learning words and acing tests for me. Being a huge vocab nerd helped me get the attention of the smartest guys in my class, and I used my flashcards as bait to land study dates.

You can unlock the power of language and create wonderful memories of your own by downloading a language learning app like Lingvist. This app saves singles the time (and hand cramps) of creating their own flashcards and makes picking up a second language more fun and efficient.

“We want to unlock the future of learning,” Scott said. “If you can make people learn a language faster, you can make them learn anything faster.”