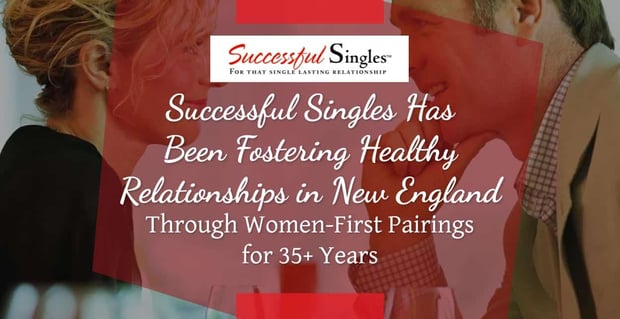 The Short Version: New England singles have turned to Successful Singles for help finding partners since 1984. Ron Cater founded the matchmaking company to connect like-minded men and women in the northeast who may not have otherwise crossed paths. In more than three decades of operation, Successful Singles has facilitated thousands of relationships and marriages, and, even though dating apps have become ubiquitous, Ron said the company’s services are just as necessary as ever.

Though dating apps have been widely used for more than a decade, some singles still yearn to find a partner offline. While mobile dating is convenient, it can feel less personal and can be a bit overwhelming, especially for mature singles.

In New England, many of those singles seek the help of Successful Singles, a tried-and-true matchmaking firm. Since 1984, the Massachusetts-based service has been developing meaningful pairings through its locations in Boston, Newton, Beverly, Burlington, Braintree, and Andover.

The company’s tagline is “For that single lasting relationship,” and its team is committed to personally finding that for each client. Of course, the dating scene has changed considerably since Ron Cater founded Successful Singles’ first Boston location decades ago.

“When we started, the computer didn’t exist — let alone dating sites,” he said.

In addition to online dating, another significant change since 1984 is the pace of life the internet has created. The biggest side effect is that more professionals now have fast-paced careers and don’t have time to spend searching for love on the web, much less in real life.

That’s why the objective of Successful Singles is to do the work for them, connecting compatible singles in New England who may not have otherwise met.

“Our clients are interested in meeting people simply and discreetly, and we take two people who would never have crossed paths and act as a conduit to match and introduce them,” Ron told us.

An Effective Alternative to Dating Apps

When clients start working with Successful Singles, they let the company know who they are, what they’re looking for, and where they would like to meet their partners. And the only requirement for becoming a Successful Singles member is an interest in a long-term relationship, as the service doesn’t match people who are only interested in casual dating.

Once a client signs up, they have an in-person consultation with Ron or the firm’s Membership Director, Roberta Diamond. Roberta has been working for Successful Singles for over 17 years and has matched over 100 members successfully.

This first consultation takes about an hour. Both Ron and Roberta like to personally meet new members so they have a better sense of what each person is looking for and with whom they might be compatible.

The Successful Singles team develops a better sense of clients by giving them a variety of assessments — including psychological testing and compatibility profiling.

Membership Director Roberta Diamond meets with clients to understand what they’re looking for in a romantic partner.

“We see what their long-term objectives are, and we go over the details of our members,” Ron said. “We use personality assessment tools that we’ve used for three decades.”

Successful Singles can offer that level of personalized service because they don’t have salespeople on the front end. And they include daters in the decision-making process.

“We bring the client into the equation. They’re not meeting anyone blindly; they have a complete say in terms of who they meet,” Ron said.

Once Successful Singles matches clients, it still goes through a confirmation process before a first date is set. A woman has the first opportunity to decide whether she’s interested in meeting the man with whom she’s paired.

“If for whatever reason, a woman doesn’t want to meet someone, his feelings aren’t hurt,” Ron said. “If we contact a man, he knows there’s already a woman in the membership who wants to meet him.”

Attracting a Clientele That Changes With the Times

Most clients who seek the help of Successful Singles are college-educated baby boomers looking for relationships. Many of them have been married before, and are committed to finding new partners for the long term.

“We’re catering to a different clientele than the online sites,” Ron said.

Successful Singles members can start and stop the service at any time, and Ron suggests that clients meet at least five or six people.

Successful singles members can start and stop the service at any time.

“If we do our job well, they’re only going to meet a few people before they meet someone special,” he said.

If members decide they need a break from dating for any reason, they’re free to go inactive.

And Successful Singles doesn’t arrange dates between its matched members. Once two people agree to a pairing, they are in charge of setting up a date — but that doesn’t mean they’re on their own.

Ron is still committed to helping his clients work through dating situations, often offering them advice and direction even outside of business hours.

“Every client has my cellphone number, and we’re happy to talk to people because we’re a family,” he said. “It’s all about the quality of life. We can improve their life if we help them meet, fall in love, and create a family.”

Though Ron understands just how significantly the dating industry has changed since 1984, most of his Successful Singles clients are looking for the same thing as they were back then: romance and commitment.

Successful Singles offers plenty of examples on its website of relationships it has helped grow as an experienced matchmaking service.

“Please allow me to take the opportunity to thank you for your diligent and thoughtful work on my behalf. I am more pleased with your efforts. You have introduced me to some quality people in what I can only assume is a very difficult job. I have really enjoyed the company of Kathy; I am placing my membership on hold,” wrote a member from Randolph, Massachusetts, in an online testimonial.

A couple from Woburn, Massachusetts, shared a similar sentiment: “I wanted you to know that Tom and I got married. I cannot tell you how happy we have been. It has been a little over a year since we first met for lunch, and it has been a wonderful year. We are such a good match for each other. We will always have a fond place in our hearts for Successful Singles. You have brought two people together who have been looking for each other our whole lives.”

Ron recently received a thank-you card from a couple he matched in the 1980s who recently celebrated their 30th wedding anniversary. Though he has been a matchmaker for far longer than dating sites have existed, he’s still excited by what he does for a living.

“We have thousands of written testimonials from people who met someone, had kids, and built a family — all of that,” he said. “We’re glad that we’ve made so many people very, very happy.”