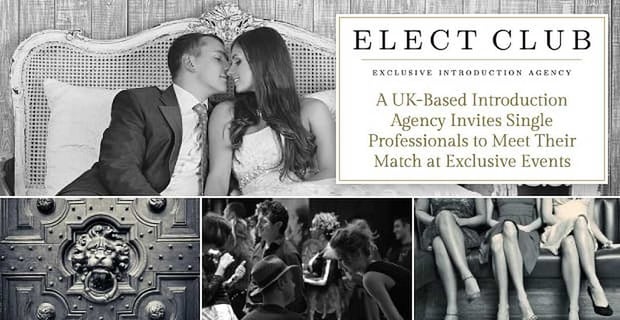 The Short Version: The moment you walk into a bar, you’re surrounded by date prospects, but it’s hard to tell who — if anyone — is right for you. Not every barfly shares the same interests or relationship goals, so seeking a compatible date at a bar can feel like searching for a needle in a haystack. Fortunately, the professional matchmakers at Elect Club foster a more discerning dating environment at invitation-only singles events in the UK. Based in London, the boutique matchmaking firm introduces single men and women in their membership base at events and on arranged dates. With Elect Club’s knowledgeable assistance, finding a compatible date and a long-lasting relationship is a fun and hassle-free experience.

Over 20 years ago, Genevieve Zawada, CEO of Elect Club, began hosting intimate dinner parties on Thursday evenings. The Londoner knew how hard it was to meet people and wanted to help her single friends mingle with one another in a low-key atmosphere. Her supper parties became a popular social gathering for available and attractive professionals in her social network. Within a year, she had over 1,000 people signed up to the invite list of the Secret Supper Club.

Genevieve Zawada, CEO of Elect Club, guides British men and woman on the pathway to love.

Genevieve realized she had hit on a real solution for single people and decided to do more to help them connect. In 2014, she bought Elect Club, a members-only introduction agency in the UK, to support the growing membership base of her Secret Supper Club by offering exclusive singles events and personalized matchmaking services.

Today, in addition to hosting the occasional dinner party, Genevieve introduces clients and advises them in one-on-one dating consultations.

Her team of experienced matchmakers, dating coaches, and other experts take a holistic approach to dating, offering a variety of helpful services that instruct singles on the art of attraction so they’re ready to meet that someone special.

“We work with people through the whole transformative process, and it’s just lovely to see them blossom,” she said. “I often see my clients become more confident and get more attention as they work with us.”

Founded in 2005, Elect Club caters to exceptional singles seeking relationships based on mutual compatibility. If you’re serious about finding someone, these award-winning matchmakers can point you in the right direction. You can get in touch by email, phone, or application form to request a free consultation and become a member.

The matchmaking process begins with a heart-to-heart conversation between the new client and the matchmaker. During the informal chat, Elect Club’s team gets a feel for what matchmaking services fit the individual’s needs and personality.

Once you qualify for membership with the exclusive club, you’ll create a profile and start benefiting from the time-tested dating services of Elect Club. Matchmakers, dating coaches, and other professional consultants give singles the opportunity to find someone special and the skills to make a good impression on a date. The team arranges dates based on personal compatibility factors judged by a matchmaking team with over 20 years of experience.

Based out of London, Elect Club is essentially a private singles club with matchmaking services.

“We look at the whole person and cater our services to what they need,” she explained. “We want them to go on a journey with us.”

Invitation-Only Events With a Social Atmosphere

Over time, Elect Club’s singles networking events have expanded far beyond the dinner table. Today, the matchmakers throw seasonal soireès that can attract up to 200 singles eager to rub elbows with a sophisticated crowd. Only members can attend certain exclusive events, like the Secret Supper Club, where about 40 people come together to learn from a guest celebrity chef and taste delectable food.

The Valentine’s Day Masquerade Party is a particularly popular event because it gives daters a chance to meet one another in a romantic setting. You can check out the events calendar to find out about upcoming events and reserve your spot before they fill up.

At Meet the Matchmaker events, Elect Club’s professional matchmakers give advice and facilitate flirtatious conversations in a casual setting. Typically, smaller gatherings like these will involve a happy hour at a bar or brief, informative presentations to get attendees engaged and having fun.

At Elect Club’s posh events, everyone is single and hoping to meet someone special. The dynamic of the event often leads to conversation and connection, making guests feel comfortable introducing themselves to new date prospects.

“The events really gave me the confidence in myself and made me realize there are some lovely ladies out there,” wrote Michael in a testimonial. He made a love connection at an Elect Club event and said the whole experience made him feel more optimistic about dating.

From red-carpet events to casual cocktail evenings, Elect Club’s events bring daters out of their shell and help them mingle in a self-selected group of attractive, successful, and serious daters.

“I was so pleased that I came to the Ball and can’t believe I am now planning a wedding!” gushed Samantha. “I can’t thank you enough for your encouragement.”

Guiding Men & Women to Their Happily Ever Afters

Years of event hosting, dating coaching and concierge matchmaking have sparked many love stories for Elect Club members. Every week, the team hears from singles and couples who have found romance through the dating services. Sometimes, satisfied clients will send gift baskets or wedding invitations by way of a thank you.

In her Elect Club testimonial, Abra said she felt frustrated with the bar scene and online dating because she wanted more than just a hookup, so she asked the matchmakers at Elect Club to help her find her match. Four months later, she went on a fantastic date with Dan, a management consultant who wanted the same things in life that she did. A year later, they wrote the matchmakers to say they planned to move in together and get married.

“Since I have been a member of Elect Club, after just two months, I think they introduced me to ‘The One'” — Dimitri P., who met his match at the Singles Soireè

The Elect Club team makes introductions and watches love take root between mature and commitment-minded daters. “I went to the Elect Party in April, and I’m happy to say I met Suzi, who was an Elect member,” wrote Kevin, “and we have been dating now for the past few months… I know it hasn’t been long, but it has really changed our lives!”

Genevieve told us a touching story about one couple who met at an Elect Club event one evening. Within moments, they were wrapped up in conversation. They had the same values, beliefs, and goals. “Everything seemed to work,” the matchmaker recalled. “From that moment on, they’ve been inseparable.” Three months later, they got engaged and moved in together.

Seeing couples fall in love before her eyes motivates Genevieve to keep working to make a difference in the lives of her clients. She’s not looking to conquer the world, she said, but she does hope to bring a little more love into it. “It’s lovely when you see marriages and babies come out of the work we do,” Genevieve said. “Being a matchmaker is a special job. It’s magical.”

As an Elect Club member, you can RSVP to romantic opportunities throughout the year. Bustling events invite singles to mix and mingle with high-caliber and relationship-minded people in the London area. From friends-only dinner parties to members-only masquerade balls, Genevieve knows how to show daters a good time and help them network with date prospects in a casual setting.

The matchmaking team has decades of combined experience introducing singles to potential dates and giving dating tips in one-on-one consultations. It is through this array of services that the exclusive dating agency has helped hundreds of people enjoy dating, meet someone special, and find a lasting relationship.

“I feel honored to be working with people to find their match,” Genevieve said. “You can’t put a price on love, and it’s a privilege to be part of so many love stories.”