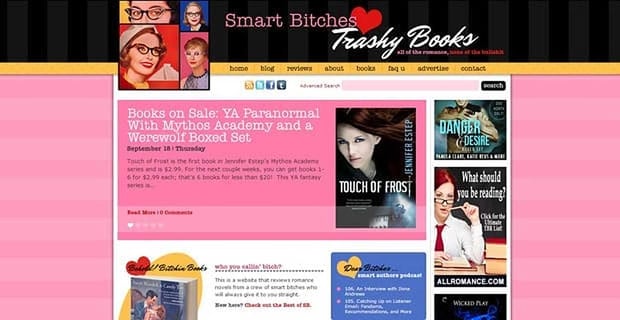 TL;DR: From pirate scoundrels winning over innocent maidens to Fabio in a puffy shirt, the romance genre tends to get a bad rap, but not at Smart Bitches, Trashy Books! There’s no shame in liking, nay loving, romance novels when you’re on this bitchin’ site.

For the past decade, Smart Bitches, Trashy Books has been the go-to outlet for women who are passionate about romance novels. The site isn’t afraid to live up to its motto, “all of the romance and none of the bullshit,” and neither are its users.

Not only did co-founders Sarah Wendell and Candy Tan create SBTB to connect romance readers to one another, but they also created it so they could have a lighthearted environment to write about the romances they love (and don’t love).

They also don’t mind clearing up some stereotypes that go with being a romance reader every now and then.

“Romances are not all the same, and the women who read and write (and edit!) them are intelligent, creative and powerful individuals who shouldn’t be dismissed outright based on their choice of reading material,” Wendell said. “And we wanted to talk about the covers and the silly stuff that goes on in certain plot lines and have fun while we did all of that.”

From enduring insults about their intelligence, to facing snide comments at bookstore checkout counters, the women of SBTB are fans whose loyalty is unwavering.

Even if they don’t like a particular book or agree with a particular theme, Wendell said readers are still faithful to the genre, what it does, how it works and what it has created for them, which is a family.

“Simply forming communities of readers online helps dispel and soothe the insults because it’s reassuring to know that there are so many other romance readers in the world, talking happily about what they read, especially for an individual who has felt isolated for loving a particular genre,” she said.

And it’s this connection with users that makes SBTB stand out as a bitchin’ leader in the area.

Whether it’s welcoming newcomers, poking fun at the latest plot twist or allowing contributors to showcase their ideas, the site oozes genuineness and sass, and there’s always room in the book club for one more.

“I still receive email at least once a week from readers who say something like, ‘Where have you been all my life?’ and ‘I had no idea there were so many romance readers out there!'” she said. “But one of the things I love best is when someone thanks me for recommending a book that they loved. That feeling of having recommended something that made a reader so happy – that never gets old!”

What’s been a big part of SBTB’s success is its global reach, which Wendell said is an important aspect of any online niche community, whether it’s romance novels, hang gliding, gardening or dating.

Wendell loves romance books so much that she wrote one about it, which is available on Amazon.

“People are increasingly comfortable and curious about finding and making connections with others through virtual contact,” she said.

“Part of the search for compatible people begins with recognizing your own preferences – what you love, what makes you happy – and the next step would be meeting people who enjoy the same things you enjoy, with whom you share a common enthusiasm,” she continued.

And it looks like it’s only bitchin’ sailing for SBTB in the future.

With its 10th anniversary coming up, Wendell said the site will integrate some new features, including a redesign that launches in the fall, while sticking with the ones users love, including the Dear Bitches, Smart Authors podcast, a joint project with romance site Dear Author.

“The podcast and the site both seem to make people very happy because each day we’re celebrating and discussing what we love,” she said. “And, as always, we have discussions, silliness, reviews, podcasts, mayhem and fun planned each day.”