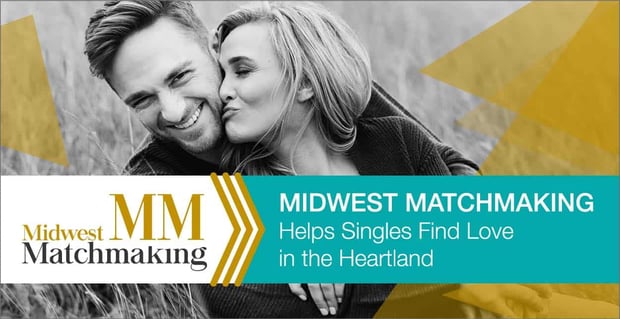 The Short Version: Midwest Matchmaking offers singles in the region a comprehensive experience customized by expert matchmakers. Clients can view photos and profiles of potential matches and discuss their options with the team, which then works to set up dates. You’re allowed to go on an unlimited number of dates, so you don’t feel pressured to find someone special quickly. Midwest Matchmaking strives to help singles meet people they would otherwise never have a chance to meet.

The team at Midwest Matchmaking said it receives engagement announcements from former members about every two weeks and hearing the stories behind those relationships never gets old.

Founder Courtney Quinlan remembers two people in particular who came to her years ago. The gentleman was a chef from Sioux City, Iowa, and the woman, an attorney and entrepreneur, was from Tarkio, Missouri. They were in their late 50s and early 60s, and they both had fun, adventurous, and quirky personalities.

“They had a lot of faith and handed over this part of their lives to us and gave up the control,” she told us. “They trusted us and said ‘Have at it.’”

It was evident to the team that they’d be a perfect match — and they were. Within six months, the couple got engaged. Not only are they planning a wedding, but they’re also starting a business together to combine their talents.

That was the couple that inspired Courtney to expand her business. Midwest Matchmaking grew out of Omaha Love, which was founded in 2009 and focused on the Omaha, Nebraska, area. As more people contacted Courtney from throughout the Midwest, she knew it was time to extend her reach.

“We now have one of the largest databases of paying clients in the United States, and with that comes a lot of success,” she said.

When Courtney graduated from college, she took a job working for a national matchmaking agency that happened to be opening an office in Omaha. She worked to attract membership for a couple of years, and she fell in love with the industry and how she could help change people’s lives for the better.

“Back in 2006 and 2007, the concept of matchmaking, especially in the Midwest, was new to a lot of people. We’re in the heartland of America, so everything comes to us last. I had never heard about it before,” Courtney said. “I ended up being good at my job, so I was traveling for them and helping to open new branches. Eventually, I decided that I had learned enough about the ideas and the concepts that I wanted to open my own company.”

She launched Omaha Love in 2009, and the service is now celebrating a decade in business.

Today, the team consists of four matchmakers and an assistant, and Courtney is planning to add a recruiter as well. Every matchmaker has experience in the industry, a college degree, and a unique personality that makes it easy to connect with — and genuinely understand — members.

Courtney said she loves living and working in Omaha because the economy is booming, so it’s becoming more metropolitan. But many farming communities still surround the city and are filled with people who have a hard time finding dates.

“Finding people is hard enough, but finding a match is even more difficult. They’ll do online dating, and there is no one in their surrounding area,” she said. “But we match them with people within surrounding areas. A lot of my clients are willing to meet someone within 100 miles of them, so it opens up a lot of doors as well.”

Midwest Matchmaking differs from other agencies and services in that members benefit from unlimited introductions.

The process starts when someone signs up on the website or calls the office to set up a one-on-one appointment. If a prospective member lives too far away, the initial interview can be conducted over Skype or video chat. The potential member goes through a screening process to ensure that the agency feels that it has some possible matches that align with what that person looking for.

Membership levels also vary based on what level of help singles need. Some sign up for a six-month or an annual plan, and there are three levels of service. Platinum members work directly with Courtney, who initiates a local and national recruitment process to find potential love interests.

Gold and silver members will work with another experienced matchmaker from the company and connect with potential partners who appear in the service’s extensive database.

“We show them pictures and profiles. We don’t do any blind dates here. I send them a match, and if they say, ‘yes,’ I’ll send that person their profile. If there is mutual interest, we’ll set up the date,” Courtney said.

Depending on the locations of both members, the first date could be over Facetime, but, if the daters are near each other, they’ll meet in person.

“It’ll be cocktails or coffee, and then we get feedback from both parties,” Courtney said. “Maybe they want a second date, but also like another match in the meantime. Or perhaps they want to just focus on this person.”

If a member finds someone they’re really interested in, they can even put their membership on temporary hold to see if the relationship works out. And the agency believes in equality, charging both male and female clients the same amount.

Courtney said it made a lot of sense to expand Omaha Love into Midwest Matchmaking because now the team can make an even more significant difference for singles in the surrounding regions.

“We get so many people who have everything going in life, but they just want someone to share it with,” she told us. “To help them find what may become the most important part of their life, to watch them get married, and watch families evolve, it’s so rewarding.”

Along with reaching more regions throughout the Midwest, Courtney and her team of matchmakers are also moving into an upgraded office that’s double the size of its previous workspace. Plus, they’re in the process of renovating the website, which they do at least every five years.

“Our experience working with both rural and city singles makes us a unique company. We’re in the heartland of America, and matchmakers in Chicago don’t have the same expertise that we do. That gives us a real advantage in smaller towns,” Courtney said. “We have a personal touch, and we are looking forward to growing our service to help all the different types of people throughout the Midwest.”