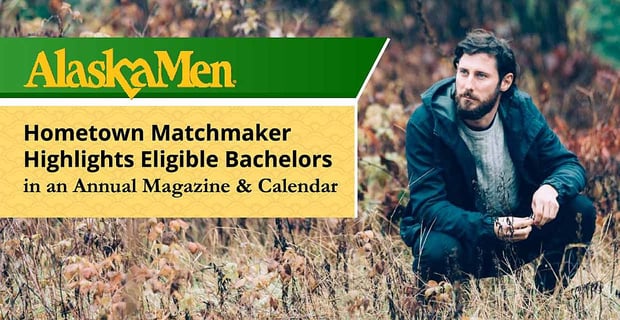 The Short Version: In 1987, Alaskan matchmaker Susie Carter began printing an annual magazine featuring single men — and it became a sensation. AlaskaMen has since introduced thousands of women to the rugged, handsome, and wholesome men in the Last Frontier. Alaska can sometimes be a cold and lonely place, but one woman’s warmhearted enterprise has melted hearts and inspired countless relationships.

Susie Carter says she was born to be a matchmaker, and it’s easy to see why. As a child, she would run back and forth across the playground delivering love notes and flirty messages for her friends. She enjoyed helping romance blossom between two people, and it made her heart swell to think she’d had a hand in someone else’s happiness.

Once Susie grew up, those matchmaking instincts stuck with her. She ran a daycare center in Anchorage, Alaska, and saw many attractive single fathers dropping off and picking up their children day after day. Her heart went out to them, and she began to wonder what she could do to help these good men find wives.

The idea to create a magazine for “slightly used men” began as a joke, but the more she thought about it, the more she realized it’d be a great way to put a spotlight on her daycare’s most eligible bachelors.

In 1987, the first issue of AlaskaMen came hit local newsstands. It featured Susie’s single male friends and made a case for them being marriage material. The magazine garnered national attention, and Susie soon had journalists from all over the country calling to ask for her story.

“I’d never published anything in my life. Little did I know that magazine issue went everywhere,” she said. “I’m just sitting here in Alaska wanting to help my friends, and all of the sudden I’m ejected into the world.”

One day, a journalist from The Wall Street Journal knocked on Susie’s door hoping to get an interview for a cover story. Of course, Susie agreed, and they sat down in her living room, with her children running all around them, and discussed her local magazine’s impact on the dating world.

AlaskaMen’s popularity led to a lot of good publicity and media opportunities, including five appearances on “The Oprah Winfrey Show” and a guest role on Discovery Channel’s hit reality show “Alaskan Bush People.” After 30+ years of interviews and media appearances, Susie has grown into her role as an authoritative and passionate advocate for Alaska’s single men.

“It’s been chaotic but fun,” she said. “I’m just an old-fashioned matchmaker in a little town. I don’t really advertise, but word spreads from the men and women I’ve helped.”

AlaskaMen began as a physical magazine, but Susie’s brand has expanded to include a calendar, a downloadable e-magazine, and a growing singles database. Single women can buy a hardcopy of the magazine, which includes a free digital version, to flip through articles showcasing the most eligible bachelors in the state.

Susie’s family-oriented magazine offers in-depth profiles of eligible Alaskan bachelors. Susie writes about the men’s work ethic, talents, goals, family values, and other attractive qualities, and then she invites women to send a letter or email to get to know these good-natured guys better. It costs a few bucks to send a letter but emailing is free, so many women decide to go the digital route. The men featured by AlaskaMen have reported receiving hundreds of letters in their inboxes.

“Most guys are contacted right away,” she said. “Alaska is a huge state, and many areas are inaccessible, so I try to make it as easy as possible to reach out online.”

The AlaskaMen magazine showcases eligible bachelors who live and work in Alaska.

Most of the men on Susie’s list have been nominated by a parent, friend, or relative. Susie has a long list of candidates that she combs through to handpick the ones who are truly “husband material.” She calls up potentials on the phone once and leaves it to the men to take the imitative and follow-up with her. That’s her way of testing how serious the man is about finding a soul mate. Susie has an eye for what women want, and she only agrees to interview men who are relationship-oriented, dependable, and attractive.

“They have to be interested and sincerely want to find a wife,” she said. “If you just want to be Mr. Gorgeous, you can do that elsewhere.”

AlaskaMen’s matching system has established a personalized and affordable middle ground between online dating and elite matchmaking. As a result, it has become a go-to resource for Alaskan singles in search of a spouse.

“When I started, there were no dating sites. Nothing,” Susie said. “Dating was a very quiet, personal thing, and it was a lot harder.”

Susie’s positivity and insight have won over many singles through the years. Her magazine is a beacon of hope for people out there wondering where all the good men/women are. Her network of singles has grown organically and includes singles who are serious about finding someone.

Over the last 30+ years, Susie has played an instrumental role in the love lives of many Alaska residents, and she has championed traditional family values in the dating scene.

Women can contact any of the men in AlaskaMen’s annual issue (the 2019 magazine is set to publish in early February) and start building a relationship. Susie recommends a few best practices for writing letters to AlaskaMen, including sending a photo along to let the man know he’s talking to someone real.

AlaskaMen features men who live in Alaska and Alaskans who live out of state and across the world. “I find men everywhere relate to the image of the kind of men who live in Alaska,” Susie said. “They tell me, ‘I also am an AlaskaMan.’ I also do events where I take groups of single AlaskaMen to women’s shows and bachelor auctions.”

Susie has an international following, thanks in part to the internet, and has seen international romances lead her readers to uproot their lives to be with their dream guy.

Throughout her matchmaking career, Susie has gone on hundreds of TV shows to share a message of love with the world. She has given interviews for news segments and radio shows that broadcast in the U.S., England, Germany, Japan, Holland, and Brazil. Her appearance on one Brazilian show aired to over 50 million South Americans and has been rerun multiple times.

“I’m really just a mom at heart,” she said. “I end up being an adviser to a lot of single men and women because I really care about helping them find love.”

Over 30 Years of Heartwarming Success Stories

One look at AlaskaMen’s Taken List can convince anyone that this matchmaking system really works. Hundreds of guys have found love after being featured in Susie’s magazine, and their success brings hope to all the hopeless romantics out there seeking one true love.

Single women should consult the Taken List before reaching out to someone in AlaskaMen.

AlaskaMen has inspired love-at-first-sight stories, long-distance relationships, and many touching stories, but Susie told us one heartwarming story stands out to her.

It started with a phone call from a man who said he no longer wanted to be in the magazine. Carl had been diagnosed with cancer and was told he only had two months to live. He couldn’t imagine dating under such circumstances, so he asked Susie to withdraw his name from her list.

Susie felt that the magazine could still be a positive experience and persuaded Carl to stick with it. Once published, his feature story struck a chord with readers. Thousands of people wrote to Carl to encourage and support him throughout his treatment. Then a message from a German nurse changed his life. Carl and the woman corresponded for weeks until finally, the woman flew to Alaska to meet him and cement their relationship. They’re now married, and Carl’s cancer is in remission.

“She adopted his children and took good care of him,” Susie said. “It just shows that love can conquer anything.”

The dating world has changed dramatically since Susie published her first magazine, but AlaskaMen continues to fill a vital role for serious daters seeking love in Alaska. This quality-driven singles network has empowered individuals over 30 to reach out and meet someone who’s well worth the wait.

AlaskaMen started out as the homespun matchmaking project of a daycare center owner and mom, and it has grown into an international publication thanks to Alaska’s most sought-after renewable resource — dateworthy men. Susie’s magazine has led to hundreds of touching love stories and has been an undeniably positive influence on the modern dating scene.

“This is my hobby. I do it because it makes me feel good,” she said. “AlaskaMen has given me a life goal, and I love what I do. I can’t wait to see what will happen next.”