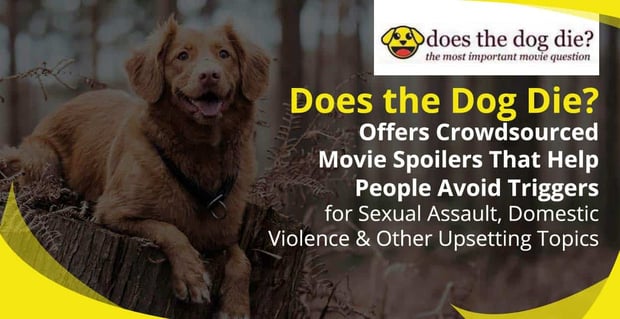 The Short Version: Nothing can ruin a movie like an uncomfortable or disturbing scene that takes you by surprise. Some may dislike seeing animals die on screen, while others might be reminded of their painful past by depictions of sexual assault, domestic violence, or infidelity. That’s why Does the Dog Die? was created to warn people about distressing scenes in movies, TV shows, video games, and other media. The alerts come from users who have watched or read that media and recorded the types of possibly disturbing content they found.

Throughout cinematic history, there have been many dog deaths. There’s the famous Old Yeller, of course, but there’s also Dinky in “National Lampoon’s Vacation,” Hooch in “Turner & Hooch,” and Two Socks in “Dances with Wolves” — and the list goes on. Even the most hard-hearted movie viewers can’t help but feel a little sad when a good-hearted dog dies on screen.

But John Whipple’s sister really didn’t like to see dogs die in movies.

“She realized people in entertainment used that trope again and again to manipulate our feelings, and she could not stand it,” John said.

He realized that other movie viewers probably didn’t like to see dogs die on screen any more than his sister did. As a software developer, John decided he would create a website that alerted viewers to those deaths so they could avoid films that included them.

Does the Dog Die? informs users about possibly traumatic events in movies, TV shows, and books they may want to be alerted to.

The site began with a simple mission: to issue trigger warnings about the deaths of dogs in movies. Some users might have recently experienced an animal dying, and they didn’t want to ruin their movie-watching experience. Others may have felt that having a dog’s death in a movie was gratuitous and would ruin their experience.

While the site started off tracking the deaths of animals on screen, it soon branched out to offer warnings about other types of upsetting content — from sexual assault to domestic violence to infidelity. Those types of scenes in video games, books, TV shows, or movies can bring up traumatic memories for some, especially when they’re surprised by them. But Does the Dog Die? provides visitors with warnings about the many types of disturbing content they may encounter.

The concept of the site is simple: No one should have lingering bad feelings after the credits roll.

“We believe that watching a movie or reading a book shouldn’t be a dreadful or debilitating experience,” John said.

When the site launched, John and his sister thought they could handle updating it on their own.

“The site started as just my sister and I watching movies. After we watched them, we’d log on and enter if the dog died or not,” John said.

But the concept took off quickly. Movie fans who didn’t want to be distressed started to flock to the site. Soon, though, those animal lovers asked to see other kinds of warnings. They wanted to know if movies included depictions of different animal deaths: cats, horses, raccoons, and so on.

Of course, John and his sister couldn’t watch every movie. So, after the site became popular, he crowdsourced the content so that others could start tracking these animal deaths.

Does the Dog Die? covers a variety of media, comic books and podcasts.

“Pretty soon, we got so many requests that we realized we couldn’t do it by ourselves. We started letting anybody go to the source and enter if the dog dies or not,” he said.

After animal lovers started using the site to provide trigger warnings about these deaths, other users soon branched out into different types of warnings. They wanted to track other kinds of potentially-disturbing movie content.

“People started branching out into other categories that had an emotional impact on them, like a kid dying,” John said.

The list kept growing as users started adding new trigger warnings, including jump scares, spiders, and even someone being burned alive. Other users didn’t want to see depictions of certain acts or situations that might remind them of particular times in their lives — including pregnancy and childbirth.

“They kept adding these other trigger categories, and we started growing quickly at that point,” John said.

John said he knows that some people think trigger warnings are silly or unnecessary. But he said that watching a movie or TV show, playing a video game, or reading a book should all be entertaining experiences, not make someone feel traumatized.

“Usually, something has happened to them in the past, and they don’t want to see it or be reminded of it again,” he said.

Users can select the categories most important to them and see if something they’re about to watch contains a scene that may be disturbing.

Whenever someone tells him that trigger warnings aren’t necessary, John asks that person what in a movie makes them cringe. He said if he really digs, he discovers there’s usually something that they don’t like experiencing on screen. That’s when they start understanding the site’s mission of helping people avoid the things they don’t enjoy watching.

This focus has made Does the Dog Die? popular with many different types of people from cultures around the world. Though the site’s audience skews slightly younger and includes more women, a wide range of people use it to learn about content in advance.

Those users have also contributed to the site’s content growing considerably. The website now tracks more than 60 trigger categories that users have found disturbing, from domestic violence to car crashes.

It also tracks issues focused on identity, including movies in which an LGBTQ or a black person dies. Like the trope of a dog dying, those common movie plot elements can be upsetting to moviegoers who are tired of seeing those with whom they identify portrayed as emotional pawns in a film.

Nearly every type of media users can consume has been reviewed by Does the Dog Die? visitors. That includes more than 4,000 movies, 700 TV shows, 400 video games, and 300 books.

Does the Dog Die? is a Community of Compassionate Users

Unlike some crowdsourcing platforms, Does the Dog Die? has attracted a user base that sincerely wants to help others have a good time at the movies. John understands that triggers go beyond just seeing animals die and that movies include depictions of assault or domestic violence that may make people relive past trauma.

If users have seen the movie or show — or read the book — they can rate it based on the site’s warnings by clicking “yes” or “no” if certain content is included, and they’re very honest about the content as a whole.

“You think opening up a website to allow anybody to submit whatever they want would mean getting a lot of spam. But I really haven’t,” John said.

“We’re all about letting people have fun at the movies, and our users end up watching more movies, not fewer. We help people see movies they wouldn’t otherwise see.” — John Whipple, Founder of Does the Dog Die?

For example, the page for the 2017 movie “It” includes many questions about the types of disturbing content depicted in the film. In response to the question, “Does an animal die?” 133 users have replied “yes.” Answering the question “Are there clowns?” 253 users said “yes.”

“You can see how many people have clicked, so you can get confidence that no one is just spreading misinformation,” John said.

Then, once a user wants to choose what to watch or read, they can either search by the piece of media they’re exploring or by the particular trigger they want to avoid. If there’s a category that they want added, they can suggest it on the platform. Eventually, if others agree that they want a new category incorporated, it will be tracked along with the 60-plus warnings already available on the site.

If a piece of media depicts something disturbing, its entertainment value may be ruined with some people. Does the Dog Die? is a way to protect yourself, and others, from the more upsetting aspects of media.

“We’re not a censor,” John said. “We’re all about letting people have fun at the movies, and our users end up watching more movies, not fewer. We help people see movies they wouldn’t otherwise see.”