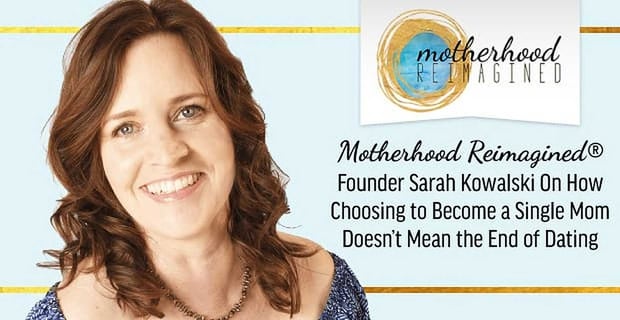 Motherhood Reimagined®: Founder Sarah Kowalski On How Choosing to Become a Single Mom Doesn’t Mean the End of Dating

The Short Version: Sarah Kowalski was in her early 40s when she found herself without a partner and yearning to experience the joy of raising a child. Determined to make her dream a reality, she embarked on a mission to become a single mom through sperm donation. After the birth of her son, Sarah knew she could help women in similar situations navigate paths to becoming parents, so she started Motherhood Reimagined. Her goal was to guide aspiring single mothers on the steps necessary to have a child in the face of fertility issues, or lack of a partner, and offer emotional support along the way. As an online community, support group, and coaching service rolled into one, MotherhoodReimagined.org celebrates all paths to motherhood while helping women come to the realization that being a parent doesn’t mean the end of their dating lives.

Motherhood Reimagined Founder Sarah Kowalski had done everything by the book. She was a successful corporate litigator by age 30 and always knew she wanted to have kids of her own, but life seemed to get in the way of that dream.

“Somewhere between my rocket-speed career and jet-setting single life, I’d completely lost my resolve to have children,” she wrote in her memoir.

Not long into her career, Sarah was diagnosed with a repetitive strain injury (also known as work-related upper limb disorder) and chronic fatigue. She left her law career and sought alternative therapies, including Feldenkrais and Qigong, which are both centered on mindful movement. When she reached her late 30s, she was working as a somatic life coach helping individuals in executive leadership change their career paths.

“Have you thought about whether or not you want kids?” he asked Sarah.

Through self-exploration and a realization that her age was making the question of children a priority, Sarah knew the answer was yes. The one problem, or so she thought, was that she was single.

“When my teacher asked me that question, it stopped me in my tracks,” she said. “My teacher helped me realize a few things I hadn’t thought about. I could get pregnant with a partner and he could leave the next day or get hit by a bus; there is no guarantee around any sort of path. It was a major paradigm shift for me.”

Without looking back, Sarah chose motherhood and now has a beautiful, loving three-and-a-half-year-old son. Along her personal journey to having a baby on her own, she wrote her memoir and started Motherhood Reimagined, an online community, support group, and coaching service celebrating all paths to motherhood.

A single mother by choice, fertility doula, life coach, and author, Sarah has become an inspiration — especially when it comes to dating — for thousands of women all over the globe navigating their own personal paths to motherhood.

“As a single mom, I have a lot of time constraints and I want to protect my child.  So when I think about dating, I feel like my filter for deciding who is good for me is honed and laser sharp,” she said. “I think it makes dating streamlined. I’m not attracted to the bad guy like I used to be. I’m so clear about finding a good guy.”

Determine Your Path to Motherhood Through Self-Exploration

Deciding whether to have a baby is one of the most difficult decisions anyone will make in their lifetime. And intentionally choosing to become a single mom can present even more obstacles and challenges. Without a partner to bounce ideas off, the path to single motherhood can seem like a lonely one.

On her website, Sarah tells readers to look inward and ask themselves what’s at stake in single motherhood. She knows many women have dreamed from a young age of being a mother, While she wants to make sure readers consider the financial, emotional, and logistical implications of becoming a single mom, she doesn’t want those concerns to completely overshadow their considerations.

Sarah wrote her memoir to give aspiring moms the tools to navigate any path to motherhood.

“I think there’s a lot of confusion and chatter that arises when you’re trying to make this decision,” she said. “I think —on some level — having a baby is not a rational choice. If you think about it with your rational mind, it’s very easy to say, ‘No, I don’t want to do it.’”

She said she helps women discern the clarity from the chatter so they can tap into their personal wisdom.

With so many facets of motherhood to contemplate, Sarah works both one-on-one and with groups of prospective mothers to help them on their paths to self-discovery. It’s a journey she took herself and entails exploring concerns, limiting beliefs, and assumptions, while thinking outside of the box for ways to make single motherhood feel attainable.

“When I realized that I wanted to have a baby no matter what, I knew I had a choice to make — either frantically date and try to find someone to have a baby with or do it on my own,” she said. “I tried a last-ditch effort at dating but realized that there was too much desperation in my search. So I decided to put finding a partner on the back-burner and pursue motherhood on my own.”

Resources on Topics From Family Building to Single Parent Dating

“I started writing a book partly because I was processing a lot of information on my own,” she said, “and also because I felt like I had a message I wanted to tell other people through my own story.”

Sara’s site houses a wide range of resources for women who are looking to build a family on their own.

Motherhood Reimagined also gives a valuable rundown of online resources, including websites and social platforms such as ESME.com (Empowering Solo Moms Everywhere), ChoiceMoms.org, and YourTango.com, where Sarah writes blog posts. On these platforms, she’s covered topics such as “8 Reasons Being a Single Mom Actually Makes You Better at Dating” and “5 Questions Before You Give Up on Marriage and Have a Baby Alone.”

Sarah also lists other resources, including the children’s book “Who Is Picking Me Up?” that helps kids understand that families come in many shapes, sizes, and colors.

“I’ve found my calling,” she said. “It feels wonderful to help women feel empowered and figure out that there’s no one way to become a mother. We can shift the notion of what family is and figure out what is best for us while helping women with the dream of motherhood. It’s really powerful.”

Delivering One-on-One Coaching & Support Every Step of the Way

There are many different ways a woman can get pregnant when she chooses single motherhood, including sperm donation, egg donation, surrogacy, adoption, co-parenting, and donor-conceived children. Sarah’s signature courses are a three-month online course and coaching program for women who are trying to decide whether or not to embark on single motherhood, and a support group for women who are contemplating alternative paths to motherhood such as egg donation or adoption.

“I had a lot of fertility issues,” she said. “Many women set out on a path to become mothers and then realize it might not take shape the way they expected. I love helping women come to terms with their own unique path. It’s a big passion of mine.”

Sara’s coaching programs help women through all the phases of motherhood.

Sara’s coaching programs were built to help women through every phase of motherhood. Other services Sarah offers via Motherhood Reimagined include a Solo Mom Pregnancy Support Group and Childbirth Education Classes for single moms as well as family building and fertility doula coaching and guidance in a variety of subjects covering everything from emotional considerations to sperm donation and in vitro fertilization.

“When I decided that I wanted to have a baby on my own, it just sort of clicked into place that this was the work I wanted to do,” she said. “I did so much introspection while making my decision that I felt called to help other women on this path and applied what I had been doing in leadership coaching and career coaching.”

Sarah Inspires Women to Do It All

Sarah learned much from her journey to becoming a single mom, and her you-can-have-it-all philosophy has helped thousands of women realize their motherhood dreams. For Sarah, Motherhood Reimagined is all about delivering support and consulting services that celebrate all paths to motherhood.

“The women I know who are single moms are incredible powerhouses; they get it done, and they hold it together. They do it all, and they do it gracefully,” she said. “I just love watching that.”

With a successful business with a bright future, Sarah has begun to open the door to a new phase of her life — dating as a single mom.

“I’m really thrilled with having a child on my own, and I’m starting to think about dating now that he’s a little bit older,” she said. “I haven’t had a lot of extra time and money to be dating, but I’m entering that realm again. When I first thought about becoming a single mom via sperm donor, I assumed I had to decide between having a baby and finding a partner, and then — all of the sudden — I realized it wasn’t an either-or. I was just prioritizing a baby before the partner since I was running out of time.”