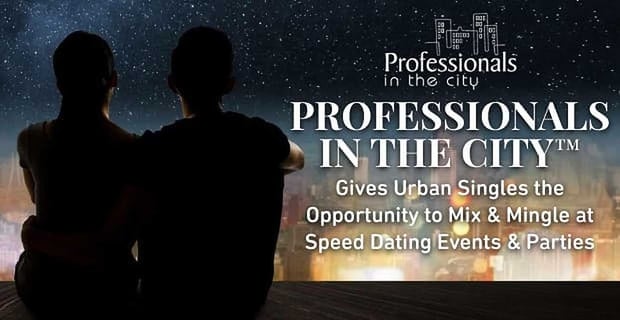 The Short Version: Having trouble in the big-city dating scene? Then you might want to try adding a Professionals in the City event to your calendar. Since 1999, the company has thrown dynamic parties for singles and couples in Washington, DC, New York City, Philadelphia, Baltimore, Los Angeles, and Boston. Many Professionals in the City’s events target singles in particular age ranges, ethnic groups, or niche communities. That way, you can find your type of person more easily. The company’s speed dating events are particularly useful for busy singles who want to increase their odds of meeting that special someone. From international trips to New Year’s Eve bashes, Professionals in the City provides tons of engaging opportunities for singles to get to know one another and start a romantic relationship.

Michael Karlan moved to Washington, DC, in the early ‘90s to work as a lawyer. He didn’t know anybody in town, so he found himself struggling to connect with people outside of work. He realized how tough it was for single city dwellers to meet people beyond the bar scene and decided to do something to help people find date prospects in their area.

Michael Karlan established Professionals in the City to bring singles in DC together.

In 1995, Michael began throwing regular parties for professionals around town. The parties started out small, but they grew larger as more friends and friends of friends showed up in hopes of meeting someone special. Michael realized he was onto something, so he decided to change careers and organize parties as his full-time job. In 1999, he founded an events company geared toward working singles in big cities, and he called it simply Professionals in the City.

Today, Professionals in the City hosts hundreds of events for as few as 20 and as many as 2,000 people in Washington, DC, New York City, Philadelphia, Los Angeles, Boston, and Baltimore. From huge holiday bashes to efficient speed dating nights, these events give people a romantic setting to mix and mingle. The event planners have years of experience and know how to get single men and women feeling comfortable and having fun in social settings.

At a Professionals in the City event, you have the chance to improve your dating life by connecting with compatible people who want the same things you do.

“What it all boils down to is attraction,” Michael said. “It’s an emotional decision that happens quickly. At our events, you have the opportunity to talk to someone, and if you feel it, you feel it.”

Hosting Thousands of People in 6 Cities Across the US

Professionals in the City offers singles a fast-paced alternative to online dating. Instead of wasting time chatting on the web and getting burnt out going on bad dates, singles can go to singles event to meet eligible date prospects in person.

“A face-to-face interaction can tell you a lot about a person,” Michael said. “You can rule out most people within a few minutes.”

The singles events often target specific age groups, orientations, ethnicities, or interests to help like-minded people meet. Maybe an event for black singles appeals to you. Or maybe you’re intrigued by an event for pet lovers. From women-only lesbian and bisexual events to single seniors meetups, Professionals in the City aims to cover a lot of bases and satisfy the dating needs of a diverse population of singles.

Working professionals can save themselves a lot of time and effort by attending a targeted speed dating event hosted by Professionals in the City.

If you’re looking for an efficient way to cycle through date prospects, you might want to check out the company’s speed dating events. Around 50 or 60 singles get together to have fun mini-dates and hopefully meet someone who stands out from the crowd.

After the night ends, participants will receive a link to a messaging forum where they can follow up with anyone they liked. The link expires after 10 days, so singles have an incentive to seal the deal and exchange contact information within the week.

Michael said the speed dating events are also a great way to make new single friends. “We give participants some mingling time before the event,” he said, “and a lot of women make friends in that time.”

The speed dating events often pose a challenge for the team because such events require an even(ish) number of men and women signed up, so sometimes you’ll see the event organizers calling for more male or female attendees. “We usually strike the right balance,” Michael said, “because we’ve been doing this for a long time.”

When promoting an event, Professionals in the City will sometimes reach out to local churches, clubs, or communities to grab people’s interests. “We’re always looking for new ways to get the word out,” Michael said. “We want to keep bringing new people in.”

In addition to singles-only events, Professionals in the City hosts general parties for anyone interested in having a good time. The company’s New Year’s Eve Gala in DC is by far the most popular of its general events. Every year, the big bash attracts thousands of city dwellers of all ages, backgrounds, orientations, and relationship statuses. In 2017, over 3,000 attendees watched the ball drop together. From salsa dancing lessons to a comedy show, the New Year’s Eve Gala features an array of fun entertainment — and plenty of food and drinks, too.

You don’t have to feel nervous about coming to this party alone. The event organizers hold a smaller speed dating event at 9 p.m., just before the big party, which gives singles a fantastic opportunity to meet partygoers who are available and actively looking for romance.

Plus, every attendee gets a bracelet upon walking in the door. Singles wear green (meaning you have the green light to flirt) and couples wear red (meaning stop wasting your time: they’re taken). This system makes it easy to scope out potential midnight-kiss prospects or long-term love interests while you mingle at the party.

If your New Year’s resolution is to travel more, Professionals in the City can help with that as well. The company organizes group trips for singles and couples seeking adventure abroad. Michael said the trips tend to attract more singles than couples because a lot of people (especially women) don’t feel comfortable traveling alone.

Over the years, Professionals in the City has had widespread success at not only showing singles a good time but also introducing them to compatible dates. Many participants have ended up in long-term relationships and marriages after meeting someone special at an event. You can read through dozens of testimonials to hear couples explain in their own words what the events did for their love lives.

“Thank you for taking the time to set these gatherings,” said Karina C., who met her future husband at her very first speed dating event. “They really do change lives.”

Michael said his events are responsible for introducing hundreds of married couples. A few weeks ago, he ran into a woman who said she was now married and had two children with the man she met at a speed dating event. At first, she had dismissed him as not her type because he was wearing a cap indoors, but during their mini-date, he won her over, and she gave him her number. Their relationship flourished from there, and it wouldn’t have happened if the event’s structure hadn’t made her give him a second look.

“This was my first time trying this, and I had an absolute blast,” said Christopher about Professionals in the City events. “I’m very glad your organization exists. You’ve made it very easy for this newcomer to meet people in DC.”

The Professionals in the City events help people break the ice and form new friendships and relationships in the course of an evening. That’s a valuable time-saving solution for career-oriented singles who have moved to a new city or lost touch with old friends.

“Surprisingly enough, it only took me four minutes to know I had found ‘The One,’” said Karina C. in her testimonial. “I always tell my friends who are workaholics (like I was) to give [Professionals in the City] events a chance.”

Since 1999, Professionals in the City Has Shown Singles a Good Time

When Michael moved to DC over 20 years ago, he had no social connections to speak of in the area, but his rocking parties earned him a stellar reputation. Today, he has built a thriving network of thousands of singles spanning six major US cities. He has spent years watching singles interact and relationships blossom, and so he has a thorough understanding of how to foster the best environment where singles can meet new people and fall for someone special.

Professionals in the City’s friendly and popular events make it easy to break the ice and establish chemistry with local singles. Whether you’re drawn to the intimate and time-efficient speed dating events or the lively and more general holiday parties, Professionals in the City allows busy singles to let loose for an evening in a romantic setting.

In today’s fast-paced dating scene, you can’t just sit back and wait for your one true love to come to you — you have to go out there and make it happen for yourself, and Professionals in the City’s events are an excellent place to jump-start your love life.

“The perception is that meeting someone and falling in love should just happen naturally,” Michael said. “In reality, the people who get what they want in life go out and seek it.”