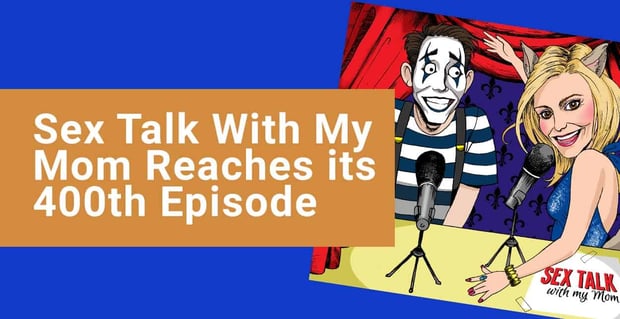 The Short Version: Having the sex talk with your parents is never an easy task. In fact, many parents avoid the conversation altogether, assuming that their precious child will never participate in such intimate activities. That’s definitely not the case for sexually liberated mom and comedic son duo, KarenLee Poter and Cam. Their podcast, Sex Talk With My Mom, helps pave the way for parents and children to talk about sex and dating without all the awkwardness.

To help open the floor for honest dialogue about sex between parents and children, KarenLee Poter created a podcast, Sex Talk With My Mom, with her comedic son Cam. Although the dynamic mom-and-son duo are now open to talking about their sex lives, it wasn’t always like that for them. In fact, Cam told us that it was very awkward at first for him to be as open with his mother and to hear her sexual experiences as well.

After the passing of KarenLee’s husband and Cam’s father in 2006, KarenLee said she decided it was time for her to use her voice and experience to start her own YouTube channel. Through her channel, she was able to confront the stigma against older women dating and having sex. KarenLee said that no topic was off limits, making the channel filled with some spicy conversations.

Like many other children in the U.S., Cam said he felt very awkward hearing about his mother’s sexual encounters. Cam said he felt that the best way to get rid of the awkwardness was to talk about it — or perhaps in his case, joke about it.

As a comedian, Cam used his mother’s YouTube sex channel in many of his standup shows. After catching many people’s attention, the mother-son duo soon realized that Cam’s humor and KarenLee’s openness to talking about sex was the perfect segue to start up the podcast, Sex Talk With My Mom.

“It was really awkward at first, and it’s definitely less awkward now. We’ve moved past every uncomfortable conversation,” Cam told us. “That’s the feeling I want listeners to come away with – why are we so buttoned up about this topic?”

When KarenLee and Cam started their podcast, they never imagined how popular it would become. They were simply on a mission to inspire laughter and open conversations about sex and relationships — something that still has a stigma against it, especially coming from a mother and a son. But before they knew it, people all around the world would find joy from listening to the podcast.

“Do yourself a favor and give this pod a listen!! This is my all-time favorite podcast. I have been able to start more meaningful and open conversations about sex and relationships as result of listening. Also, it never fails to make me laugh. Thanks Cam and KarenLee!” a fan said in a review.

In addition to the podcast, KarenLee has also helped many seasoned women find their groove through her witty vlogs and her self-help book “A Cougar’s Guide.” She redefined the term cougar as Confident, Older, Unique, Genuine, Assertive, and Racy woman. Redefining the term cougar helped empower many singles who are divorced, widowed, or getting back into the dating scene after some time.

Since they started the podcast, KarenLee and Cam have allowed people to get more involved with the content. Based on the episodes topic, anyone can send in a text to the team, asking them any sex or relationship question they so please.

“The goal – it’s great if it’s educational in any way – but it’s meant to help people by having an open conversation about sex with the people you’re closest to,” Cam said. “It can help you feel more liberated in life, and that’s most important.”

I never wanted to talk about my sex or dating life with my parents when I was growing up. It wasn’t until I went off to college that the distance helped me be more open. Even though I didn’t tell them everything, it still felt great sharing the little things that I did with them. According to KarenLee and Cam, honest dialogue can reduce sexual shame and violence while increasing pleasure.

A lot of people feel uncomfortable to talk about their sex or dating lives because of the negative connotation attached to the subject. Many people believe it should be a private conversation, but what they don’t realize is that expressing your sexuality is actually more beneficial than keeping it private. Especially when you’re a parent who wants to create an open door for you and your child to have transparent and honest conversations about impactful topics.

“As a parent, it’s great to open up that conversation with kids. At first when we started this, I was thinking it’d be great for parents and kids to have this relationship, but of course not all parents open that space for children,” Cam said. “But it’s good for any intimate relationship, parent, friend, or partner to be able to open up.”

From KarenLee’s perspective as a parent, she learned how important it is to have open communication with her children. As a mother of three, she created a comfortable environment for her children to share sensitive topics, and that strengthened their relationship.

As scary as it may seem, children do grow up and experience sexual encounters. Parents, like mine, may try to dismiss the thought of their child behaving in a sexual way. But KarenLee suggest to parents that it’s best to talk to your children and allow them to come to you about their sex and dating lives without judgment or shame.

“Cam is the middle child of three, and I’d tell all of them, you can talk to me late at night. That was the most important part of my day, you can tell me anything and I wouldn’t judge. It spilled over so that friends would come over, and we were laughing and talking til 1 a.m. sharing stories,” KarenLee said.

Sex Talk With My Mom: A Podcast About Dating, Sex & More

Sex Talk With My Mom has entered a new chapter with the release of its 400th episode: Sneaky and Freaky Convo. Over the years, KarenLee and Cam have talked about all sorts of things on their podcast. From fake orgasms to their sex bucket lists, this mom-and-son duo made talking about sex a hilarious and memorable experience.

KarenLee and Cam have successfully made a name for themselves with the podcast. They have been featured in many live performances and shows around the world, including Second City, Tosh.0, and Megyn Kelly’s Today Show. The two proudly want to continue entertaining people about sex and dating. They’re at their 400th episode, but they say that they’re just starting.

To celebrate their 400th episode, the dynamic duo take a trip down memory lane in their latest  YouTube video. The two discuss their favorite moments from the show and share how talking about sex has not only changed other people’s lives but theirs as well.

We can expect even more from the team in the future. Cam told us that they’re branching out to turn the podcast into a show on Netflix in hopes of reaching a larger audience.

“This podcast is hilarious, informative, open-minded and I really enjoy the viewpoints of both hosts. Listening to this conversation teaches me about sex, accepting my body and sexual preferences. I kinda wish I was part of their family,” a listener said in a review.

Listeners who want to hear more juice from KarenLee and Cam can purchase a Patreon membership, which grants them access to even more exclusive and bonus perks. Starting out at just $5 a month, membership allows people access to invite-only Zoom parties with the hosts, more episodes and access to their Patreon-Only Discord channels.