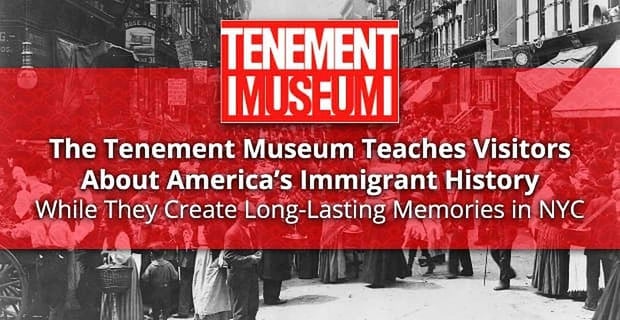 The Short Version: The Tenement Museum, located on Manhattan’s Lower East Side, tells the stories of immigrants searching for the American Dream between the 19th and 21st centuries. Learn about the people who helped shape New York City while you and your date stroll through recreated apartments and businesses of real families in the museum’s two historic tenement buildings. Take a step back in time as you experience what life entailed for working-class immigrants from more than 20 nations. With a dedicated and passionate staff, it’s easy to see why the Tenement Museum welcomes more than 250,000 visitors each year and has become one of the fastest growing cultural institutions in the Big Apple.

As the home of Ellis Island, the busiest US immigration inspection station from 1892 to 1954, New York City has long been a melting pot of nationalities, cultures, and ethnicities. For those who came to America fleeing religious and political persecution or simply looking to build a new life, Manhattan provided the landscape — and tenement buildings provided four walls to call home.

The Tenement Museum, located on the Lower East Side of Manhattan, is on a mission to preserve that vibrant, and vital, history.

“For 30 years, the Tenement Museum has preserved and interpreted the history of immigration through the personal experiences of newcomers to New York’s Lower East Side,” said Jas Chana, Media Relations and Communications Manager for the Tenement Museum. “We’ve done this by forging emotional connections between visitors and immigrants, past and present, and enhancing appreciation for the role immigrants play in shaping the American identity.”

The Lower East Side Tenement Museum is made up of two historic tenement buildings — 97 and 103 Orchard Street — and was founded by historian and social activist Ruth Abram and Co-Founder Anita Jacobson, who for years searched for a tenement to serve as the perfect space to build a museum honoring America’s immigrants. In 1988, just as they were about to end the search, they stumbled upon the properties on Orchard Street.

The Tenement Museum is an educational place to start a date night and welcomes more than 250,000 visitors each year. It has become one of the fastest growing cultural institutions in the Big Apple. It also serves as a testament to the grit and determination of thousands of working-class immigrants from more than 20 nations who called New York City home.

Preserving and Interpreting the History of Immigration Through Personal Experiences

The Orchard Street apartments were in ruin after being shuttered for more than 50 years, and it proved quite a task to transform the buildings into a museum. After several years of research and compiling evidence about the tenants and tenement life, the museum’s first restored apartment opened to the public in 1992. It was the 1878 home of the German-Jewish Gumpertz family, and quickly set the tone for the Tenement Museum’s commitment to education.

“The Tenement Museum is a vital educational force on the Lower East Side,” said New York City Council Member Margaret Chin. “It is especially valuable for my constituents, many of whom are recent immigrants, to have a museum in the district that speaks to the long history of challenges newcomers to America have experienced.”

It offers a glimpse into the lives of immigrants who were searching for a better life while holding on to their traditions, religion, and familial connections. Among those represented in a new exhibit at the museum are Bella Epstein, whose parents survived the Holocaust, and Jose and Andy Velez, whose mother left Puerto Rico for garment work in New York City.

“Our newest permanent exhibit is called Under One Roof, which is the Museum’s first to explore post-World War II immigration,” Jas said. “It tells the stories of three families; a Jewish refugee family, a Puerto Rican migrant family, and a Chinese immigrant family. Since each family had one parent who worked in the Lower East Side’s garment industry. The 90-minute tour concludes in a recreated garment shop.”

The museum is regularly listed among New York City’s top attractions on TripAdvisor and was recently ranked one of the world’s best non-art museums in an article published by Reuters. The Tenement Museum offers many ways for visitors to learn about the history of New York City through educator-led — and self-guided — walking tours.

“I find there are two kinds of people in the world,” said Dr. Ford W. Bell, Former President of the American Alliance of Museums. “Those that haven’t yet been to the Tenement Museum, and those that have been there and regard it as one of the best museum experiences of their lives.”

The museum is affiliated with the National Park Service and the National Trust for Historic Preservation and offers insight into many aspects of immigrant life. Connect with that special someone while taking part in the Under One Roof tour. Or quench your thirst for historical knowledge with Shop Life, which illuminates the history of immigrant entrepreneurship with the stories of shops at 97 Orchard Street — including John Schneider’s 1870s German saloon and Israel Lustgarten’s 1890s kosher butcher shop.

Other notable tours include Sweatshop Workers, during which guests visit the Levine family’s garment workshop and the Rogarshevskys’ Sabbath table at the turn of the 20th century, when the Lower East Side was the most densely populated location in the world. There Irish Outsiders and The Lower East Side walking tours offer options to explore the neighborhood’s architects, artists, and others who made contributions to its vitality.

One of the Fastest Growing Cultural Institutions in the Empire State

The people who visit the Tenement Museum annually experience innovative programs, connect with each other, and learn about our shared history as a nation of immigrants. Visitorship has grown 40% over the past five years, and tours regularly sell out. It’s easy to see why the Museum has become one of the fastest growing cultural institutions in the Empire State.

“Everyone at the Museum relishes working for an institution with such a stellar reputation and such quality programming,” Jas said of the museum staff. “The museum is a collaborative working environment. From marketing professionals to historians, the institution relies on everyone’s skill sets to make it a premier cultural and educational New York City institution.”

The Tenement Museum offers faithful recreations of the home lives of immigrants.

Aside from being a top-notch attraction, the museum also provides educational programs for thousands of people each year, including professional development workshops that help hundreds of teachers integrate artifacts, architecture, and narratives in their classroom history lessons. Another free program, Shared Journeys, helps recent immigrants improve their English language skills.

“Over the next five years, the Tenement Museum aims to use every medium at its disposal to educate about the value of immigration and reshape the narrative on the issue,” Jas said. “We want to quadruple the number of people directly impacted by our programming from 250,000 to 1 million, and reach over 10 million people with our core message that immigration helped shape American identity.”

It’s been said that learning while having fun has a much larger impact on retention and long-term memory. Whether you’re on a weekend getaway to the Big Apple or planning a unique first date, the Tenement Museum provides an entertaining and enjoyable experience.

“Our museum makes for a memorable date for couples with shared interests in history, immigration, or just storytelling,” said Jas. “Our walking tours, in particular, make for great dates — particularly Foods of the Lower East Side — if you and your significant other are interested in culinary experiences.”

Tastings At The Tenement features foods from the neighborhood while exploring the influence of immigrant culture on what Americans eat. It is a group tour that starts with a visit to 97 Orchard Street and continues with a sit-down tasting meal in the museum’s private dining room overlooking Delancey Street. It’s a great date idea to create long-lasting memories while learning a little bit, too.

“We’re aiming to reshape the national narrative about immigration from one of fear and loathing to one of respect and appreciation,” said Jas. “The Museum believes its trademark storytelling approach will build bridges of understanding across the chasms currently dividing our nation.”