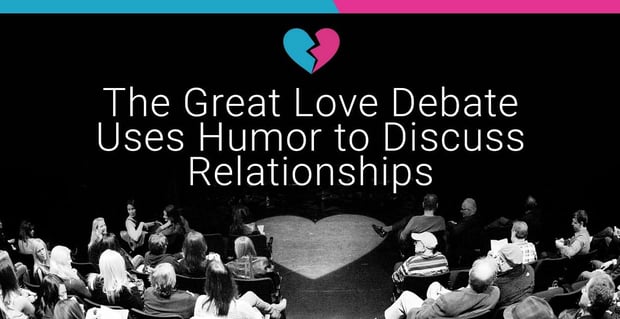 The Short Version: Men and women are very different, and many singles still struggle to understand the opposite sex in their quest to find love. The Great Love Debate creator aims to get everyone talking about their differences — and similarities. Relationships, sex, love, dating, and modern norms are all on the table for these interactive, town hall-style live events, and their accompanying podcast. Singles and couples enjoy The Great Love Debate events and get to hear thoughts about making lasting connections.

Should a man pick up a woman in his car on the first date? The answer’s not always clear, as audience members share during a live performance of The Great Love Debate.

The show’s creator, Brian Howie, hosts the interactive, town hall-style events worldwide. They typically include a lot of conversation about modern protocols and how they change with the times — and perspectives.

“What does a date mean nowadays? It used to be I called you up, I asked you out, I picked you up,” Brian asked a crowd recently as he held a wireless microphone and stood between tables in the audience. Then, he asked the women in the audience if it was acceptable for a man to pick them up for a date. Many women raised their hands to indicate yes, while a few raised their hands for no.

“No way!” one woman said when Brian walked over to learn more. “I don’t want your ass in my house.”

So what’s a man — or a woman — to do? Brian discusses that central question during the show, which has scheduled stops throughout the United States in 2022. The Great Love Debate is now in its ninth season and has performed more than 400 shows in 100-plus cities around the world. It is a fun way to get people talking about things singles may struggle with.

Along with the live shows, Brian also hosts a weekly podcast, which is one of the top-rated podcasts that deals with dating and relationships. The topics are always entertaining, and the show often includes celebrity guests who take part in the debate.

Shows and Podcast Grew From a Book Tour in 2013

Brian started The Great Love Debate back in 2013 after publishing a book titled “How to Find Love in 60 Seconds.”

“It was a tongue-in-cheek look at dating,” he said. “My agent at the time said, ‘Rather than do a book tour with a couple dozen people in a bookstore, why not raise some of the questions that the book raises in a town hall-style theater setting?’”

What was supposed to be a one-time promotional stunt turned into more than eight years of holding exciting and fun discussions. Today, the events bring strangers together to learn about love and relationships.

At first, the goal was to raise questions. Brian said he wasn’t a dating expert, but over the years, that’s changed. After eight years of talking with singles worldwide, he said he knows what men and women want when finding love.

“Women want the men to try harder, and men want the women to make it easier. That is the crux of the disconnect almost everywhere,” he said. “It’s a standoff, and everyone needs to take a step back toward each other.”

Brian uses humor to get people to relax and laugh so they can achieve that reconnection. The event also spun off into the world’s top dating and relationships podcast. The live and taped discussions focus on what people want to know about the opposite sex.

“Women look for red flags, and men look for green lights,” he joked to a recent audience. “That’s why we’re here.”

Every Show Keeps the Conversation Going

While the show feels dynamic and unscripted, Brian said he likes to cover basic topics to get the conversation going.

Online dating, of course, is one of the most talked-about issues when it comes to modern relationships. It’s also a common topic in his one-on-one coaching.

Sometimes, he’ll get an audience member to relinquish their phone and share their dating profile with the rest of the crowd. If that sounds mortifying, think of the people who raise their hands when Brian asks how many people logged into their Tinder or Bumble accounts since the show began.

People in the audience often report that some of the biggest problems connected to modern dating involve social media. Some people struggle to put down the phone and be present on a date. Other people worry more about whether the person checks all their boxes rather than if they have excellent chemistry. Then there’s the grass is greener syndrome, which is typical with online dating.

Brain said the show and podcast encourage people to get offline and open their eyes to the opportunities in the real world. He may even drag an audience member on stage to pretend to pick up a woman in line at Starbucks during the show. It’s an exercise in, as he calls it, getting “your head out of your apps.”

Brian said the team behind The Great Love Debate had to reschedule a few international stops, but the COVID-19 pandemic didn’t stop the events. He still held shows in Dallas, Miami, and Tampa and hosted about a dozen virtual shows.

“Before COVID-19, many single people were thinking they might be better off without dating. The time away made people miss that real human connection, and our 2022 shows have been some of our most enjoyable ever,” he said.

He has shows scheduled in Dallas, Miami, Phoenix, Boston, New York, and other locations in 2022. Brian also continues to host new episodes of the podcast. Part of the format’s allure is the inclusion of celebrity guests to share their experiences, wisdom, and humor.

Through the years, he’s shared the stage with Dr. Drew, Brandi Glanville, Adam Carolla, Patti Stanger, Jillian Michaels, Tatum O’Neal, and just about every winner of “The Bachelor” and “The Bachelorette.”

The guests discuss their ideas about dating. For example, one guest recommended that men visit a woman’s profile and learn about something she enjoys.

“If she likes cats, go to a cat farm,” one guest joked.

In the end, people who participate in The Great Love Debate, either in person or by listening to the podcast, are sure to learn something about love. Brian said his biggest takeaway is how important it is to take risks.

“The answers almost always can be found outside our comfort zones,” he said. “We are afraid of being rejected, afraid of being hurt. Getting beyond that fear and hesitation is the key to finding all possibilities.”