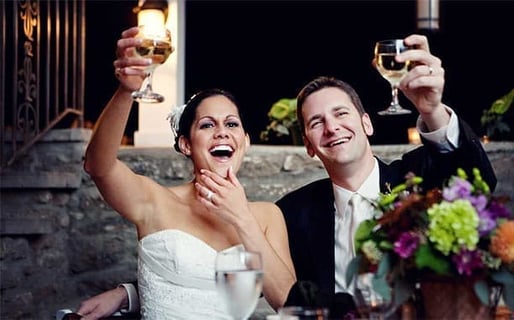 Why Married Women Drink More Than Their Single Counterparts

Marriage has long been known to curb men’s drinking, but new research reveals the opposite is true for married women. A walk down the aisle may make a woman more likely to drink alcohol. But it’s not because she’s unhappy.

Why do women who’ve tied the knot drink more than their single, divorced or widowed counterparts?

According to Corinne Reczek, the lead sociologist of the new study, women are more likely to drink with their husbands. In general, married men drink less and married women meet them at that mark by drinking more.

It seems that both spouses have an influence on each other’s drinking habits after getting hitched. So while she may convince her hubby to stay home instead of going out with the guys, she’ll still join in on his drinking by having a beer at home with him.

Naturally, humans tend to engage in the same behaviors as those they surround themselves with, so it makes sense that married women drink more.

But after a divorce, men are more likely to hit the bottle while the opposite is true for women, the study shows.

The researchers suggest that this is because men tend to use external coping skills when they are distressed. This means they’ll opt to go to the bar and grab a beer with some buddies rather than staying in.

Women, on the other hand, internalize, which often leads to development of depression. Watching chick flicks and eating a carton of Ben & Jerry’s is one of those internal coping mechanisms many women resort to after a rough breakup.

Marriage’s effect can be a good thing.

Marriage’s effect on a couple’s drinking habits can be a good thing as long as one of the partners doesn’t have a serious drinking problem.

Researchers suggest that alcohol can help couples bond. And there’s also research that long-term couples who drink in moderation report fewer drinking-related problems than those who have recently suffered a divorce.

This is especially true for divorced men, who drink significantly more than married men.

So, if putting a ring on it means men will drink more and women will drink less, most couples will dovetail and drink moderately, which hasn’t been shown to have any negative health effects. So cheers to the bride and the groom!