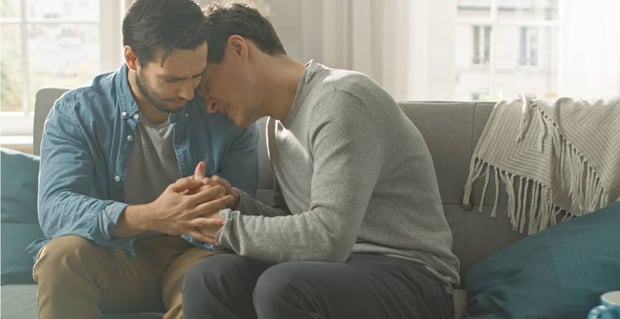 How Do I Know When My Gay Relationship is Over, And What Can I Do About It?

Relationships should have a certain level of ease. Of course, any time two people are together for a long period of time, there will always be problems and disagreements along the way. I have found that the first nine months to one year of many relationships are a period of compromise.

You may start to recognize that your partner has habits and traits that are an integral part of his life. You now have to turn your thought process inward and see whether you can accept those habits and traits.

If the bond is strong, then you can look at the big picture and dismiss more trivial things. But you may need to end the relationship if things get too rocky. Here’s what to do if things become unsteady and how to know if you should call it quits.

1. You’re Not on the Same Timeline

I realized over the years that my sense of urgency is probably greater than that of the average person. I used to get into fights with boyfriends because I wanted to be at the airport three hours before a flight, and they wanted to get there within half that time.

Some people love planning and being responsible all the time, while others enjoy spontaneity.

This sense of urgency put me in a heightened emotional state. I would find myself getting very quiet — half my mind fuming with frustration and nervousness, while the other half questioning my behavior.

What I’m getting at is that I find that it’s best to be with someone who agrees with your sense of timing and planning. Sure, it can be fun to be spontaneous for a bit, and you should definitely find a balance between being responsible and letting things go every now and then.

But if that rift between you is too great, things can get a bit tumultuous. You need to build certain bridges and make it known how much you value and respect time — and your partner should value and respect how you feel. This is the key to knowing whether a relationship is worth your time.

There have been so many instances in my life when I found that my desire for sex did not match that of my partner. With one partner, I would sometimes want sex more than he did, and with another partner, I would want sexless. As gay men, we’re men at the end of the day. We want sex a lot more than women, generally speaking. However, some men do favor the left side of the brain, which is said to control more logical and objective thinking.

One of my more successful moments in my physical relationship was when my partner and I would schedule our sex. It felt super spontaneous to know when I could expect a fun afternoon delight. Sexual communication is a very important pillar in your relationship and nothing to be ashamed of.

Sex is something to be celebrated rather than be labeled as scary or shameful. Having been raised a religious kid from a more conservative town in America, this concept was hard for me to explore at first. Once I got over that self-deprecating talk, I immediately felt better.

And, if these conversations seem weighted or immovable, then that is when it’s time to pull the relationship cord.

Some gay men, however, need to have multiple sexual partners and only explore a polyamorous or open relationship. Even when I was actively dating online, I made it very clear in my profile that I am only wired for a monogamous relationship. I will always cheer for someone wanting a relationship they want, and if a potential partner wanted to have a relationship that was other than something monogamous, I was simply not that guy.

Defining those relationship boundaries in early conversations is very important so the path later is more solid.

3. Your Communication Styles are Too Different

I’ve dated many guys whose communication styles differed completely from mine. I learned that I was a big communicator — whether it was via text message or phone — and really appreciated and wanted that same attribute in a partner.

I realized that I would often have the expectation that someone would text me back within a few hours. I have always practiced that behavior myself and would naturally want my partner to share it.

Sometimes that meant I needed to adjust my expectations. I would rather not send a text in the first place than blame someone for not showing the same courtesy I would have of a prompt reply. I can’t get mad if I don’t set a precedence.

Some people love talking on the phone every night, while others prefer only texting a few times during the day.

I can remember a few times when someone’s casual communication style was a dealbreaker for me. It was an absolute turnoff to have someone not text me back for a few days, and me being over 30 years old. I didn’t have the patience to teach someone manners.

We’ve all been in instances that required us to look within our own thought process when we’re about to fight with our partner. In this case, it’s important to listen and understand that straightforward communication is a good thing, regardless of the subject.

Again, it’s always important to recognize the big picture. Is this person kind and respectful? Does this person have long-term goals that match yours? Do you genuinely like spending time with this person? If all of those things are a thumbs up, then you’ll be fine.

I’ll admit that I’m pretty tactful about my spending habits. I remember going to Las Vegas with one of my more affluent friends, and he spent easily over $1,000 on our dinner. He ended the meal with, “I know those portions were small, so we’ll eat here and get fast food hamburgers later.”

I would never spend that amount of money on a meal even if I were a millionaire. I never really had the experience of fine dining growing up, and even now that I’ve lived in Los Angeles for over a decade, I still have maintained that posture.

Over the years, I found that some guys I dated would be peeved that I wouldn’t spend $20 on some fancy grilled cheese. I wouldn’t call myself frugal, as I’m totally willing to splurge for a special occasion, but not every weekend.

If my boyfriend at the time would rather spend money on some fancy hotel than on a cute AirBnB, I would tell him what I was comfortable paying and that would be my contribution.

I’ve also been in many situations where I was clearly the breadwinner in the relationship, and was happy to contribute more. Picking up on those more muted cues without having someone awkwardly tell you he can’t afford first class on a plane will help create a compassionate synergy.

What’s really important is noticing your lifestyle compared to that of your partner.

5. You Disagree About Having Children

A lot of people spend their lives planning for a family. Sometimes this is not just a desire — it’s a definite and important need.

If you don’t want children, but your partner desperately does, that will be a problem down the line.

Discussing this goal is very important as it may be deemed the fulfillment of their life and non-negotiable. Establishing a timeline you are both happy with will increase the chance of relationship success.

It’s OK If Things Don’t Work Out, and Make Sure You Take Time to Reflect and Heal

The most important part of any breakup is the aspect of healing. Moreover, it’s also important to be proud of yourself for fighting for a relationship and knowing that you did all you could to make things work successfully.

You must take a comprehensive viewpoint of any experience and survey the pros and cons of what you did and how you felt in that relationship.

Everything happens for a reason, a season, or if we’re lucky, a lifetime. That said, the main takeaway is that you grow toward being a better person and future partner.

Getting Over a Breakup

How to Get Over a Breakup: 5 Tips for Gay Men