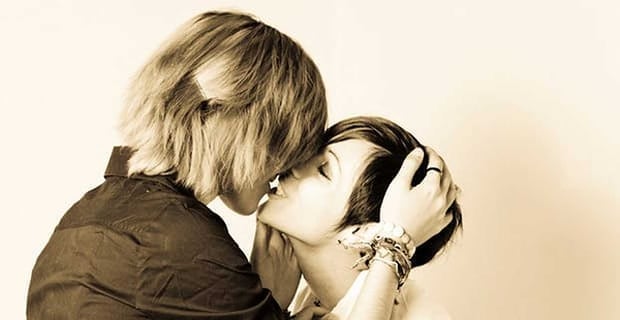 Wow, right? It’s an amazing feeling when you fall in love as a lesbian for the first time.

My first love is still vivid to me.

She was everything I’d ever dreamed of in so many ways – beautiful, smart, loved reading, into poetry and so elegant.

I fell hard and fast. She seemed to feel exactly the same way, at least with the falling hard and fast part of love.

Having come out later in life, falling in love for the first time was the magic I’d dreamed of for years, and within a year of coming out, I’d met this amazing woman who I immediately put on a pedestal.

Really I was overwhelmed with how much I enjoyed everything about her. I told her things I’d never shared before. I shared things I loved, like authors, books and poets, and she shared the same with me.

Life seemed to be going in exactly the direction I’d hoped for, but then I was scared. It was overwhelming to be so obsessed with a woman. I’d never had that experience before.

“You will find love shows

up over and over again.”

It was also very confusing.

She presented herself as being so experienced and wise about the lesbian lifestyle.

She promised to help me in my coming-out process and to be a big support. She told me she’d help me to avoid some of the mistakes she’d made when she came out.

Well, things ended rather dramatically one evening after she’d been out to dinner with her ex-girlfriend. I’d known from the beginning she was still emotionally connected to her ex, but I’d blindly hoped that would change.

I’d been having a hard time with so many changes going on in my world at the same time.

I was coming out and in a new job. My son wouldn’t talk to me because I’d come out. I’d moved twice in a short period of time after not moving for more than 15 years, and I was dragging my daughter around in the process.

Can you say messy? Yes, it was.

It ended when she said she couldn’t deal with my being so emotional. That can sometimes happen with first love. You go over the top with expectations, hopes and dreams. You start living in the dream instead of in reality.

You don’t realize you have no skills at how to sustain a lesbian relationship because it is so very different from being in a relationship with a man.

All of that happened to me and more.

My first love came to a crashing halt and never got back off the ground.

I survived. I learned a lot. The most important thing I learned was going slow is much better than rushing into the unknown with a lesbian you don’t even know.

I love the idea of first love, but often it’s a rough season of life. You just haven’t experienced enough to manage the path to create a strong relationship.

You’re going to have bumps, dips and probably a few crashes, but you could make it through to the other side.

If you don’t, it’s not because you’re wrong. It’s just that a strong relationship takes having the right skills.

Keep getting out there. Keep learning what makes relationships work. You will find love shows up over and over again. It’s not a one-time event.

Can You Still Be in Love Even If She Drives You Crazy?

4 Steps to Breaking Out of Lesbian Lonely Land