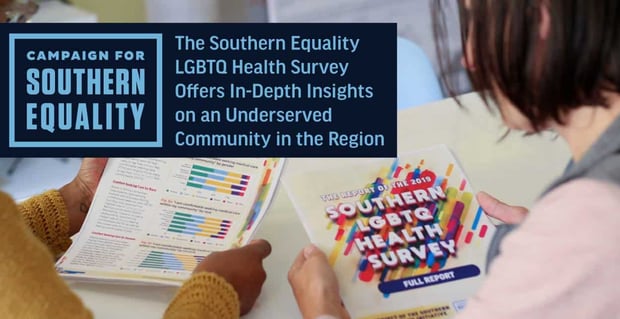 The Short Version: Members of the LGBTQ community in the Southern U.S.  can face particular challenges with both their physical and mental health. They can suffer from anxiety, depression, substance abuse, and HIV at higher rates than their heterosexual counterparts. To shed light on the problem, Campaign for Southern Equality, a nonprofit that aims to improve the lives of LGBTQ Southerners, implemented its first LGBTQ Health Survey in 2019. More than 5,600 respondents of various sexual orientations, genders, races, ages, regions, and classes shared their experiences with health care access in their communities.

Members of the LGBTQ community have higher risks of developing certain health problems than other sectors of the population. For instance, some have higher rates of HIV and sexually transmitted diseases, higher rates of smoking and substance abuse, and an increased likelihood of facing mental health issues, including anxiety and depression.

Those in the LGBTQ community are also likely to struggle to access health services. A 2016 study found that its members “are more likely than their heterosexual counterparts to experience difficulty accessing health care.”

Campaign for Southern Equality Executive Director Jasmine Beach-Ferrara said she started focusing on this issue because of some of the stories she’d heard about LGBTQ people struggling and failing to find compassionate, informed health care.

The Southern LGBTQ Health Survey is one of the largest of its kind ever undertaken. More than 5,600 LGBTQ individuals living in the South submitted their responses on a wide variety of topics. Some questions focused on their physical and mental health, while others had them consider whether the treatment they’d received had been affirming.

“We want this survey to inspire people and help mobilize interventions around LGBTQ people in the South,” Jasmine said.

The survey included several questions about physical and mental health. About 55% responded that they were in good health, while another 15% noted they were in excellent health. However, more than one-third of respondents said that their health was fair or poor.

“A number of Southerners told us they could access the care they needed, and some had positive experiences accessing mental health services,” Jasmine told us. “It is happening that they are getting the care they need, but that needs to be true for everyone, not just those who are privileged.”

Jasmine said she hopes that the survey can offer advice and recommendations to healthcare providers who want to better accommodate LGBTQ Southerners.

“We see the survey as a call to action more than anything else. This data will be activated to inform new and improved approaches for care in local communities and policy-level changes that are needed for LGBTQ Southerners,” she notes.

For instance, the South is the epicenter of a new HIV epidemic, and a significant number of men who are intimate with men and transgender women may have the disease without knowing it.

Campaign for Southern Equality Executive Director Jasmine Beach-Ferrara spoke with us about the organization’s report.

“A sizable number of respondents don’t know their status. So it is urgent to have testing widely available,” Jasmine said.

While some healthcare providers want to be more understanding of LGBTQ health issues, they may not know where to start. Practitioners must seek out their own training to understand the specific health issues the LGBTQ community faces, as they often don’t learn about those issues in medical school.

The survey can also provide them with specific information to make their practices more welcoming. Campaign for Southern Equality already offers that training to healthcare practitioners, but it plans to expand those offerings soon.

“We offer training to help providers and clinics, and we struggle to keep up with the demand. We want to train any providers who want to get trained,” Jasmine said.

Still, Campaign for Southern Equality can’t improve health care for LGBTQ individuals alone. That’s why the nonprofit hopes that the survey will spur more interventions, including training for medical students and advocacy for Medicaid expansion in legislatures.

Members of the Southern LGBTQ community face unique challenges in all aspects of their lives. For example, a survey from GLAAD showed that 40% of Southern respondents wouldn’t feel comfortable attending a same-sex wedding, as opposed to 34% of all Americans. Additionally, 61% said they would feel uncomfortable if their child was dating a transgender person.

While those issues are essential, Campaign for Southern Equality’s survey highlighted the lesser-known health care outcomes affecting LGBTQ people in the South.

“It is possible for LGBTQ folks to access positive care in the South. Issues around gender, income, and rurality decrease the likelihood someone is having those experiences,” Jasmine explains.

Still, a third of America’s LGBTQ population lives in the South. Within that diverse and multifaceted group, Jasmine noted that more research needs to be done in considering the lives of LGBTQ people of color and living in different parts of the South.

“We still need to do a lot of community-based research to understand what’s happening on a regional level,” she said.

Jasmine said she and the Campaign for Southern Equality team are hopeful that LGBTQ individuals can eventually lead their lives without shame or fear.

“We see reasons for hope every day in our community, acts of daily courage and bravery. We see growing public support,” she said.

Jasmine advocates for starting small when trying to change the state of LGBTQ health care in the South.

“We need to start talking more about mental health issues and HIV. Get tested yourself and encourage others to get tested. Use your voice to advocate for policy changes that treat all of us equally,” she said.