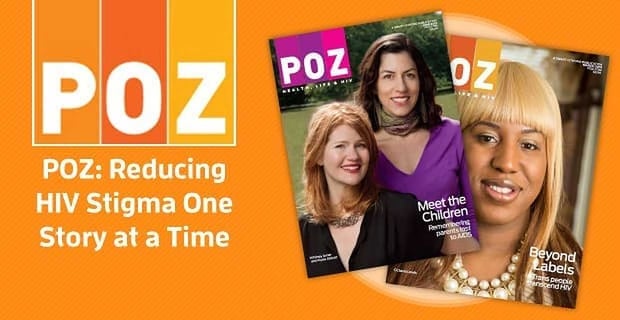 POZ: Reducing HIV Stigma One Story at a Time

The 411: Featuring a dating network of 150,000+ members, personal testimonies added weekly and consistently-updated news, POZ is breaking down barriers and supporting an often unfairly stigmatized community: those living with HIV.

When the AIDS epidemic first overwhelmed the U.S. in the ’80s, people were shocked and scared, and people living with HIV were often shunned.

POZ magazine and POZ.com serve as advocates who actively fight against that stigmatization, providing HIV-positive persons and their loved ones with the attention, support and information they need.

More than 125,000 copies of POZ magazine are distributed across the nation eight times a year, and more than 70 percent of persons residing in the U.S. who are aware of their HIV-positive status are touched monthly through POZ.com and their social media sites reflecting the significant impact they’ve made on the community.

POZ magazine provides HIV-positive persons and their loved ones with the support and information they need.

POZ is one of many health-centered platforms published by Smart + Strong, a leading provider of unbiased and enlightened health care information.

“It was about dying with HIV. We turned it into living with HIV,” said Ian Anderson, Smart + Strong President and COO.

We got a chance to chat with Anderson to delve into the details of POZ and its influence.

The Hardworking Team Behind POZ

The faces of POZ have been combating the stigma of HIV and moving a nation toward a more enlightened and hopeful outlook since 1994.

“The 30-year-old stigma attached to it still comes up too much in this country,” Anderson said.

POZ Founder Sean Strub is a well-known author and activist in the HIV community whose life was “hijacked,” to put the diagnosis in his words, when the epidemic was unleashed in the U.S. in the early 1980s.

Strub’s presence in the HIV/AIDS activism platform has included participation in daring social demonstrations, a near-win running for U.S. Congress as the first openly HIV-positive candidate and several awards recognizing his contribution.

Strub’s most recent work, “Body Counts: A Memoir of Politics, Sex AIDS and Survival,” includes a personal account of a young man’s battle with the conflicting politics and personalities affecting the lives of every HIV-affected individual, leading up to the founding of POZ.

Today Strub is leading a group in the charge against criminalization issues for those with an HIV-positive status.

POZ’s sister site, AIDSmeds, provides people living with HIV with the information and resources they need to make wise health care decisions. AIDSmeds Founder Peter Staley was even featured in the Oscar-nominated documentary “How to Survive a Plague.”

“This was before there were drugs,” Anderson said. “These are the guys who sat in the FDA’s office and put a condom over Senator Helms’ house to highlight what was going on and the complete lack of attention HIV was getting. It’s just amazing what these people have done.”

“I give all the credit on the editorial side —they highlight and bring to light real stories and make real change,” Anderson said.

Leading the charge on the content side is Oriol Gutierrez, POZ’s Editor-in-Chief, who was diagnosed with HIV in 1992.

Gutierrez oversees a team of bloggers, editors, experts and contributing community members to offer an average of 25 stories, news updates and uplifting testimonies each week.

And once you’ve become a POZ staffer, you are forever a part of the family.

“It doesn’t matter if you’re in editorial, circulation, sales — people are forever connected to what we do here,” Anderson said. “We’re a relatively small company, but we come across as much bigger, and it’s really because the whole community is with us.”

In a variety of ways, POZ magazine and POZ.com offer HIV-positive individuals and persons whose lives are touched by the virus guidance, encouragement and updates on important topics relevant to HIV/AIDS.

Following its audience from print to the web to social media, POZ provides content regardless of location or subject matter.

While their treatment updates and cure updates are quite popular, POZ also includes dietary advice, mental health support and even forums for caregivers and loved ones.

The POZ Personals section also removes stigma associated with HIV, so it’s just about dating again. The lessons section is an expansive resource currently housed on AIDSmeds.com that discusses every pertinent detail to living with HIV — from potential opportunistic infections to a health services directory.

POZ Stories offers testimonials from HIV-positive patients, as well as caregivers, loved ones and supporters.

But perhaps the section the team is most proud of is POZ Stories, where once a week someone gets a chance to share their story.

Launched three years ago, POZ Stories offers testimonials from not only HIV-positive patients, but also their caregivers, loved ones, medical professionals and supporters of the community.

“We’ve always shared stories. That’s been our history, but we didn’t have a place to share everybody’s story. That’s what POZ Stories brought about,” Anderson said. “We’re a lifestyle brand. We’re FOR people living with HIV.”

When we asked Anderson about the impact of POZ and the feedback received over the years, words just didn’t feel adequate for explanation.

“It’s literally 20 plus years of saving lives. I can’t even begin to explain how rewarding it is to consistently get that type of feedback,” he said.

The broad team of POZ staffers is not only spreading awareness and information, but they are actively getting out there to advocate on behalf of HIV-infected communities who have been so underrepresented in the past.

As the medical world comes closer to developing a cure for the virus, POZ works to find a remedy for the stigmatization in the sociopolitical realm.

Anderson told us about a “functional cure” with the potential to get viral loads under control, “but there’s still so much stigma and not enough education so infection rates continue to remain stubbornly high.”

Until that changes, POZ promises to continue being a resource and a partnership for those affected by HIV/AIDS.

If you or someone you know has been affected by the HIV/AIDS virus, visit POZ.com for the safe, enlightened and unwavering support you’ve been looking for.