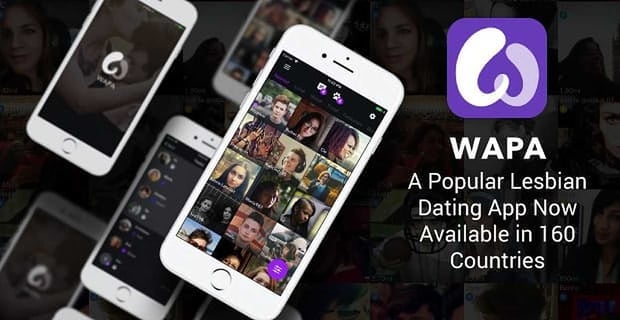 The Short Version: Seeking a potential lesbian match on a general dating app can feel like searching for a needle in a haystack. Except instead of hay, it’s all creepy dudes who think they have the power to turn lesbian women straight. Ick! Singles shouldn’t have to put up with that just to get a date. Fortunately, on Wapa, lesbian, bi, and bi-curious women can keep to their own and flirt in a 100% dick-free zone. The popular app supports a queer-friendly network of over 250,000 women in 160 countries worldwide. You can download Wapa for free and then send a video message to capture a lovely lady’s attention and find a love interest in your area.

Wapa is a Spanish slang word meaning a beautiful and elegant woman. As in, “Hola, wapa, can I buy you a drink?” The word started as internet shorthand for guapa (which means beautiful) and soon became a lighthearted endearment popular among young Spanish speakers.

A few years ago, an innovative dating company decided to name its lesbian dating app Wapa as a nod to its youthful appeal and techy roots. Plus, the app was designed to host beautiful single women, so the name seemed appropriate.

Wapa is a hassle-free dating app for lesbian, bi, and bi-curious women worldwide.

Today, Wapa is among the most popular lesbian-only dating apps in the world. From the UK to Brazil, singles from all over the world have joined the network to chat up lovely women. The innovative features, including fun video messages, make this dating app stand out as a simple and effective networking tool. You can download Wapa on Google Play or iTunes for free.

“We wanted to make an app where women could connect with each other,” said Andrei, Wapa’s PR and Marketing Manager, “and I believe we’ve accomplished that.”

Earning the Trust of Thousands of Lesbian, Bi & Bi-Curious Singles

The average age of the women on Wapa is 30, and most users tend to be in their late 20s to early 30s. These aren’t flaky singles going through a phase in college. They’re mature working women who know what they want and don’t have time to mess about on general dating apps.

Wapa’s simple search filters empower women to find a compatible date on their phones, and the 60-second video messaging helps them make a stellar first impression.

Wapa’s straightforward interface makes it easy to find the woman of your dreams.

You can use the GPS locator on your phone to pinpoint dates in the area, or you can browse through profiles from all over the world. You have 160 countries’ worth of women at your fingertips. The built-in translator allows women of all cultures to communicate with one another and start international relationships without leaving home.

Worried about your privacy? A four-digit passcode will lock the app so no one can break in without your permission.

Wapa also uses a cutting-edge user-generated verification system to vet dating profiles and weed out the fakes. Users can now vote on which profiles they think are genuine and which they think are fake. The system tallies the votes and features genuine profiles more prominently. The team is currently developing ways to verify photos and profiles more efficiently to keep the scammers and spammers at bay.

Andrei said he often hears lesbian women complain about fake profiles on other dating networks, and Wapa wants to eliminate that issue by building safeguards and authentication tools. “We create a level of trust,” he said. “We always try to protect our users, and we consider ourselves very close to the queer community.”

The Membership Grows About 15% Month Over Month

Wapa has grown by leaps and bounds in the last few years. It burst onto the dating scene as the first lesbian-only dating app available in Europe, and it has been wowing women ever since. In 2017, the app grew its user base in Brazil by over 42% in just one month. On average, the app sees a 10% to 15% increase in total number of users each month.

Every month, over 250,000 women browse Wapa in search of romance.

Andrei said they’re happy with that level of steady growth, but the team is also eager to grow even bigger and become a household name in countries around the world. Wapa’s developers innovated video messaging and a sleek modern interface to attract more signups and encourage users to use the app frequently once they’ve downloaded it.

The Wapa team is proud to have over 250,000 active users — that means people who have used the app in the last month — and does everything possible to keep them satisfied.

“We’re quite happy when we see a couple meet through Wapa,” Andrei said. “People tell me all the time, ‘I met my girlfriend on Wapa!'”

A Multi-National Team Works Hard to Serve the Queer Community

Wapa’s team members come from a variety of backgrounds. Andrei is from Romania, and he works closely with people from the UK, Spain, Italy, and Brazil. The multi-national team fosters and promotes diverse perspectives on the dating world by picking the brains of lesbian singles and figuring out what these individuals need to be successful on a dating app.

“I’m gay, not a lesbian, so I’m always asking lesbians to please tell me what their needs are,” Andrei said. “I like to learn, and I learn a lot from talking to them.”

Andrei told us that most of the feedback the Wapa team gets is positive and encouraging. If they receive a bad review, though, a team member responds with a personalized message and works hard to address the issue. The customer service team assists all users experiencing technical difficulties, most of which come down to a problem with the user’s phone, not the app itself.

“Love it. I’m enjoying every moment.” — Keyvia Ivy in a five-star review of Wapa

“We listen closely to what our users wish our app had,” Andrei said. “I personally read all emails from users because each of them is important for us.”

Currently, the Wapa team is exploring options to create an under-the-radar dating app for countries where the LGBTQ community is targeted by police. Because being gay is illegal, being caught with a well-known gay dating app, such as Grindr, on their phones could get a person arrested. Through a new LGBTQ-friendly app, the Wapa team hopes to give gay men and lesbian women a platform where they can mingle freely and discreetly with people they desire.

Although it has already grown to serve 160 countries, this up-and-coming dating app is just getting started. The Wapa team is always expanding the network’s reach and improving its services. Keep your eye on Wapa — because it has a lot of bold plans in the works.

“For us, 2018 is a year of change,” said Andrei. “This is the year Wapa will become the best lesbian dating app with a lot of new and surprising features on it.”