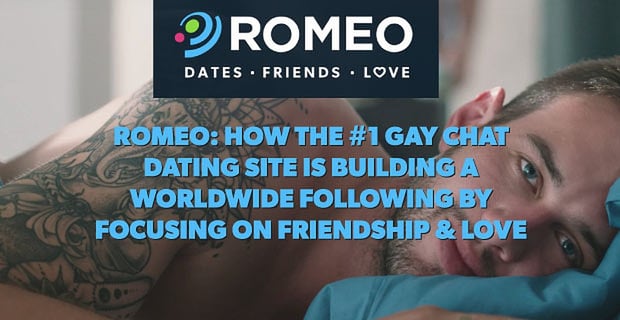 ROMEO: How the #1 Gay Chat Dating Site is Building a Following Through Friendship & Love

Short version: ROMEO is the largest online dating platform for gay and bisexual men in Europe and also serves many users around the world. The site, founded 15 years ago, helps men of all ages find the relationships they seek — whether it’s a lover, companion, or friend. ROMEO’s effectiveness stems from its international employees, each of whom brings a unique point of view to creating an intuitive dating platform. Today, ROMEO has 2.5 million users and is active in advocacy, donating to many LGBTI charities — but it isn’t done yet. The platform is developing more ways for Romeos to build communities of like-minded folks around the world. The site’s use of technology to help gay men find friendships and love around the world make ROMEO our #1 gay chat dating site.

As the largest gay dating site in Europe, ROMEO has helped many of its members form significant partnerships.

Liam and Raphael met in Berlin in 2014 via the platform. Liam, an English dancer, had been skeptical about finding “the one,” but when he met Raphael, a German martial arts instructor, they immediately clicked.

“A little over four years ago on ROMEO, I met the man I ended up marrying in August 2017,” said Liam. “From our very first date in Berlin, we fell deeper and deeper in love with each other, experiencing a type of relationship I never knew existed.”

But Liam and Raphael are hardly the only success story ROMEO has helped write. ROMEO’s blog shares love stories from many other users to help encourage hesitant daters to get out and find their own special someone.

“One of our favorite topics on our blog is love stories, and we often receive letters from Romeos thanking us for bringing them together,” said Gui Bosselaers, ROMEO’s Chief Marketing Officer. “It’s exceptionally satisfying to have someone thank you for helping them.”

ROMEO connects gay and bisexual men with others searching for love, friendship, or a community.

ROMEO, which is available on desktop and mobile, has also helped its users build other types of connections — including friendships.

“Whether it be meeting your match, getting married, making it possible for you to find love, or just making contacts in a remote location, we enjoy hearing about how we’ve helped bring people together,” Gui said. “Our testimonials tell us that we’re doing something correctly.”

ROMEO’s founder Jens Schmidt came up with the idea for the first meet-up and dating platform for gay men after realizing he didn’t know how to meet other men like himself while he was on a trip to London.

“While traveling, Jens realized that there wasn’t an intuitive dating platform to meet other gay guys anywhere in the world,” Gui said. “Now, more than 15 years later, we are making it easy to meet like-minded people worldwide. ROMEO is accessible to everyone, no matter where you live or what you are looking for.”

The site uses technology to keep the conversations going between gay men — whether it be through pictures, video, or messaging — which is why ROMEO is our #1 gay chat dating site.

Even with so many online dating platforms available to queer men, ROMEO continues to differentiate itself from other options.

One way it accomplishes that is through a talented team of international staffers who keep their fingers on the pulse of what daters in the gay community desire.

“We’re a diverse group of people based in Amsterdam and Berlin. Some of us are more creative while others are more nerdy and techy,” Gui said. “Our office culture rests on the different viewpoints our colleagues bring to it.”

ROMEO’s office and its platform share a mission: bringing a diverse group of people together. That mission inspires user loyalty, which is another key to ROMEO’s continued success.

“Many of our users have been with us for years — some even since the beginning — and they make up the majority of our customers in established markets in Germany, Austria, Switzerland, Spain, Italy, and Greece, among others,” Gui said. “They know the product very well.”

Much of the site’s long-term loyalty and continued popularity stem from the platform’s easy-to-use features — as well as its responsive mobile app.

“We have a simple sign-up process that makes it possible to be online in just a couple of minutes. Our product offers a wide range of features, and all of them have been developed to make finding the best matches for our users as easy as possible,” Gui said.

ROMEO’s filters allow users to narrow the pool of partners they’d like to meet by filling out a profile with their interests and hobbies. A hashtag-based search feature helps daters narrow their options further.

Users can find matches quickly through the ROMEO mobile app, even while traveling.

All of the pairings are done at the user level, and ROMEO puts its members in charge of every aspect of their experience — from matching to meeting and beyond. To prevent a repeat of Jens’ unsuccessful trip to London, users can find like-minded friends or partners while they’re traveling.

“When traveling, you can post your itinerary and your profile will appear in your destination city or cities,” Gui said.

Users also appreciate the safety systems the platform has in place. One of its most popular features, QuickShare, is a private album that allows users to share their photos with other users.

For added security, users can delete their photos at any time, which makes them inaccessible across the platform. ROMEO also uses other methods to keep the form of communication safer.

“The photo permissions only last for 60 minutes before access is no longer possible. It’s another way we keep your images a bit safer,” Gui said.

Especially in less socially developed countries where homosexuality is illegal or frowned upon, safety features, like QuickShare or video chat, offer users peace of mind.

“From your mobile device, you can chat by text or use video chat before you meet up,” Gui said. “Video chat is an extremely useful feature if you live in a region where meeting up with anonymous people can be dangerous. Safety is critical, but being safer doesn’t have to be boring. Video chat is a good example of how we’re making that a reality.”

Building Community in Small Towns, Internationally, and In Between

Though successful in facilitating dating, ROMEO has also progressed in helping men make friends in queer circles. That can be particularly difficult when they live outside of major cities.

“We know that not everyone lives in a big city with a ton of options to choose from, and not many people walk around with a sign listing their interests or hobbies, either,” said Gui.

In response, ROMEO is planning to roll out a Groups feature that will help its users make friends. The goal is to bring like-minded members of the gay community together over shared interests.

Users will have the option to search for groups based on their interests or create a group of their own if they can’t find one.

ROMEO’s search features make it easy for users to find like-minded men near them.

“Groups are like neighborhoods and clubs within our community to find others who share your passions,” Gui said.

In addition to bringing friends together and connecting men for romance, ROMEO also supports LGBTI charities.

“We don’t want to be the only ones who feel good about giving, so we chose to make it easier for our Romeos to help other gays, too,” Gui said. “In 2009 we launched the PlanetRomeo Foundation, which focuses on spurring societal change and improving the position of LGBTI people throughout the world. We want to emphasize the most disadvantaged regions and communities.”

The PlanetRomeo Foundation provides up to 5,000 euros to grassroots organizations working on initiatives in places where LGBTI individuals have limited rights. Over the last seven years, the Foundation has pledged more than 500,000 pounds to 130 projects in 59 countries.

While ROMEO is a well-established dating platform, the company has no plans to rest on its laurels. Instead, it continues to seek new demographics and create features to benefit its users.

“We are actively growing other markets and continue to explore how to communicate our brand across a broad demographic,” Gui said. “We are also reintroducing the brand to the younger generation, and that is part of our focus in newer markets, like the UK. Recently, our new commercial has attracted a younger demographic.”

In the end, ROMEO’s function goes beyond matching, meeting, and dating; instead, it aims to create a sense of community.

“We’d like to see more people engaging and interacting with others on the platform — both locally and globally. We want to keep bringing people together in various ways,” Gui said.