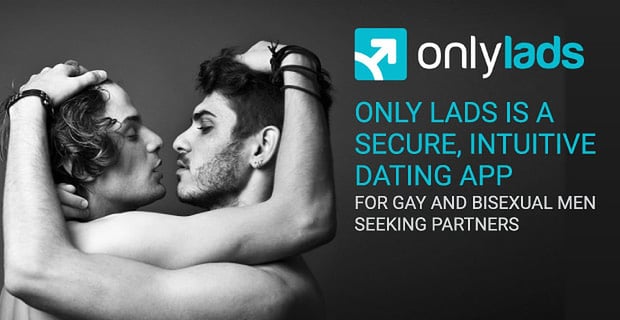 Only Lads is a Secure, Intuitive Dating App for Gay and Bisexual Men Seeking Partners

The Short Version: Only Lads is a dating app designed exclusively for gay and bisexual men, and, since launching in 2012, it has grown to serve more than 3 million users. The app also understands the gay dating industry because it was founded by gay men specifically for those seeking male partners. Only Lads offers gay and bisexual daters plenty of ways to find the relationships they seek — from travel or chat partners to spouses. The company continues to innovate its features to provide men with a dating experience tailored to their needs.

Only Lads Founder Jimmy Forrester-Fellowes was familiar with gay dating online, but while he knew about many gay dating sites and app, that didn’t mean he liked any of them.

“I knew all the gay dating sites, and I used a few of them when I was younger. But I always felt like there was so much room for improvement,” he said.

Only Lads Founder Jimmy Forrester-Fellowes spoke with us about the challenges gay and bisexual men face in the online dating world.

As a single gay man, Jimmy understood that most dating platforms could be frustrating for others like him. As a software developer, he also knew he could help make the changes he wanted to see.

“After five years developing software at a telecommunications company, I decided to pack it in and take a shot at building the dating service that I thought the gay community deserved,” he said.

From that desire, Only Lads was born. Jimmy set out to design a platform and app that would make sense for the gay community. Despite his knowledge and stake in the company, though, he wasn’t certain Only Lads would take off. Initially, Jimmy was worried about paying his mortgage.

Now, more than six years after its inception, Only Lads has grown to 3 million users worldwide, and it keeps Jimmy busy. Its overwhelming success also means he doesn’t have to worry about his mortgage.

“It’s hard work, but it’s also been amazing,” he said. “I would never change the chance I took to create Only Lads.”

A Network of Professionals Looking for Like-Minded People

Only Lads is different from many other dating sites for several reasons. First, it’s designed only for gay and bisexual men, so users don’t have to search endlessly for the right matches after they join.

It was also created by gay and bisexual developers who understand the challenges men face with other online dating platforms. This commitment to the community motivates the tight-knit team to work even harder for its users.

“We’re a really small team, and I think, sometimes, people expect us to be much larger as we’re operating a bustling dating service.”

Although the term “lads” is primarily used in the UK — where Only Lads originated — the company employees hail from many different countries.

“We have over 3 million members now, and 1.5 million of those are actively using the service.” — Jimmy Forrester-Fellowes, Only Lads Founder

“We’re spread out all over the world, so we all work remotely usually from home offices or co-working spaces,” Jimmy said. “Our culture is to be as progressive as possible, and we’re a relaxed company to work for.”

The commitment of Only Lads’ developers seems to spur on the rapid increase in the platform’s user base, and those members are as diverse as the developers who work on the platform.

“We have over 3 million members now, and 1.5 million of those are actively using the service,” Jimmy said. “The US is our biggest market, followed by the UK. We’re also growing quickly in the Indian market. The majority of our members are professionals with an average age of 31.”

Users are active in connecting with others, as well, with more than 20 million messages per month exchanged through Only Lads.

Safety and Transparency are Vital to Developing Trust

One of the biggest worries for users of online dating sites or mobile apps is safety. This is a particularly vital concern for some users of Only Lads, since they may not feel comfortable openly expressing their sexual orientation in their home country.

Only Lads addresses that concern through its robust security and practices that weed out those who aren’t using the platform authentically.

“We spend a lot of time and energy making sure that we offer the safest possible dating experience,” Jimmy said. “I’m proud that we now have around-the-clock moderation. We’ve also invested in numerous systems that weed anyone out who is trying to use the service for non-genuine reasons.”

Only Lads helps users find each other authentically through security measures and transparency.

Further, Only Lads wants its users to find what they’re looking for organically, not through unscrupulous means. That’s why the platform aims to develop transparent relationships.

“We’re built on the principle of being a simple, genuine, and honest dating service,” Jimmy said. “We don’t have any of the shady practices that some competitors do, such as sending messages from ghost profiles or showing people as online when they aren’t.”

Those features and practices help the company stand in contrast to many other successful dating platforms designed with heterosexual users in mind. Only Lads exists to offer an alternative to those dating services, Jimmy said.

Only Lads: More Than 250,000 Successful Matches and Counting

Jimmy set out to create not only a dating platform that he could be proud of but also one that all gay and bisexual men would find welcoming. So he and his team built Only Lads to address the specific needs of that demographic. However, that isn’t the only area in which the platform is unique.

Only Lads differentiates itself by not using algorithms because Jimmy isn’t sure they actually work — anywhere.

“I’m not convinced that the majority of dating services’ matching systems work. We don’t do profile matching, and we certainly aren’t another swipe left or right service,” he said.

Instead, Only Lads works as a social discovery platform for gay and bisexual daters, meaning it provides them with the tools to quickly find local people who meet their criteria. This strategy works so well that many Only Lads users are no longer active because they’ve found the relationship they desired.

Only Lads is in the process of improving its mobile app for both Android and iOS.

“We survey users as they leave our service, and 250,000 members told us they found love on our platform. That’s one of my favorite statistics,” Jimmy said. We occasionally get a lovely letter in the mail thanking us for providing the service that led them to their partner, and those notes always make me smile.”

Despite these impressive matching statistics, Only Lads isn’t through providing its users with useful tools to improve their potential to meet others. The company is putting the finishing touches on a progressive web app that the team is looking forward to putting in the hands of members.

Later, the company plans to roll out native apps that will replace current Android and iOS versions of its platform.

Jimmy hasn’t entirely ruled out the possibility of Only Lads offering profile matching because, as matching algorithms become more sophisticated, he believes they could become more useful.

“With the advent of accessible and powerful AI platforms, providing sophisticated matching is becoming easier,” he said. “I wouldn’t rule it out as something we will add in the future; however, if we do add matching, it would be complementary to our existing search systems.”