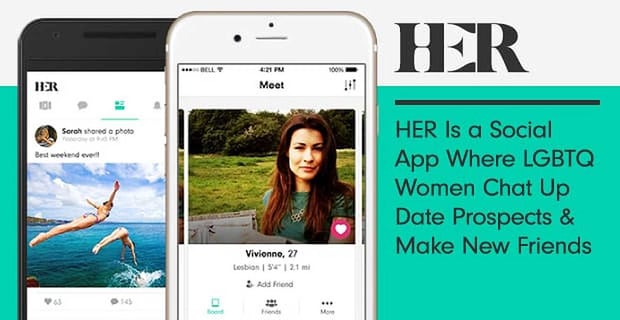 The Short Version: HER is a unique dating app built with lesbian, bisexual, queer, and other non-binary women in mind (as well as transgender men). Robyn Exton launched the app in January 2012 to meet a need for a social space specifically made for LGBTQ people. Today, the network hosts an active community of over 1 million users in 50 countries, and they’re always growing. The app’s clean profile, user-generated events, and match-based chatting give members multiple avenues to start a conversation, build a friendship, and attract a date. This free social platform supports a strong LGBTQ community and connects individuals in all types of relationships. Whatever your orientation, if you’re looking to meet some lovely people, HER welcomes you.

Robyn Exton didn’t get into the dating industry to make a fortune — she did it to help a friend. One night in 2011, she was having a drink with her gal pals, one of whom had just gone through a rough breakup and was looking to move on. Robyn told her the fastest way to get back out there was through online dating.

However, her friend was a lesbian and found embarrassingly few dating websites made for young women like herself. Many of the options were originally dating services for gay men later repurposed (turned pink) for lesbians.

Robyn Exton, Founder of HER, got the attention of London singles by handing out colorful flyers and branded toilet paper at LGBTQ events.

Robyn worked for a branding consultancy in London and was familiar with dating platforms through her clients, but she’d never coded before. Still, she saw a need in online dating for a reliable women-seeking-women site, so she took on the challenge. She named the initial version of the site Dattch — short for “date catch” — and began growing her user base.

“In the early days, I’d go to nightclubs with a bottle of sambuca in one hand, and tequila in the other, and encourage girls to download the app in return for a shot,” she recalled in an interview with the BBC. Thus, through word of mouth, she gained traction with her desired audience of lesbian, bisexual, and queer women.

Her platform, now called HER, aims to be more social, less dating. The straightforward interface introduces women in a Pinterest-like forum, open and flexible to all. Founded in London and now headquartered in San Francisco, HER claims a worldwide audience of more than 1 million women from 50+ countries, including the U.S., the U.K., Brazil, Australia, Thailand, and Mexico — making it the largest mobile network for lesbian, bisexual, and queer women as well as transgender men.

HER is not strictly for daters but also for platonic friendships and long-term penpals. Over 30% of users label themselves as “in a relationship” and browse the site for new, not necessarily romantic, connections. The app fosters a trustworthy and free space for women. The HER  team verifies the identity and gender of all users by having them connect via social media.

HER Premium offers paid members added value with features like viewing who’s liked your profile, seeing who’s online now, and enjoying unlimited swipes. There’s no pressure to upgrade, though, because the free version is full of opportunities to meet local LGBTQ women.

“It felt crazy to me,” Robyn said to the Huffington Post, “that no one had truly made a dating product for women — one that displayed the information women wanted to see, that connected the community, that resonated with the young queer women I knew — so I decided to quit my job and start making it.”

Signing up for HER takes only a few minutes. The app pulls pictures and information (like your birthday and relationship status) from your Facebook or Instagram account, creating a profile for you without you having to do more than click “I agree.” You can select from a list of 12 sexual orientations, including lesbian, bisexual, transgender, straight, questioning, queer, flexisexual, and fluid. Or you can keep your options open and refrain from posting your orientation. HER doesn’t out anyone or require personal details you don’t want to give.

No need to define yourself in brief, awkward terms on HER — let the pics speak for themselves!

Profiles come ready made with photos from social media, but you can make it your own by adding more or writing some text like “Bowties are cool” or “Self-identified cat lady” to show some personality. Your profile is a virtual bulletin board, easily customized with eye-catching visuals.

HER skips wordy descriptions and lengthy questionnaires to let daters form their own first impressions based on photo collages, shared interests, and actual conversation.

“It’s about understanding how women behave,” Robyn told us, “and building features that give them the value they’re looking for.”

On the app, users view profiles one at a time, pressing the heart icon to like a particular photo or the profile in general. After you’ve both liked each other’s profiles, you’ll be notified of a match and can start messaging.

“No hiding in the corner here,” E. J. Rosetta wrote in a review for the Huffington Post. “If you’ve shown interest in someone, they’re going to know about it. Everything you do or click on comes up as a notification, so browse wisely.”

HER is a welcoming place for lesbian, bisexual, and queer women and transgender men to come together. The Feed feature showcases the app’s community feel. You can see what people are saying and sharing on a global or local level and add your own comments in an open forum of like-minded people.

A popular part of the Feed is the Events tab where users can submit events happening near them and invite users to meet up in a social, LGBTQ-friendly setting. The HER community often highlights local festivals, poetry slams, parties, and general meetups perfect to attend with a friend or on a date.

You’ll find a curated list of events on HER’s interactive app. You’ll be able to see who’s attending and send a like to anyone who tickles your fancy. “There’s a social element to it,” Robyn explained. “One that isn’t limited to dating.”

In the words of the app’s 2015 press release: “HER is about creating a space where lesbian, bi, queer, curious, flexisexual, pansexual, and not-so-straight women can meet and find out what’s going on in the lesbian world.”

Dear HER: Dating Advice From a Sympathetic Source on Tumblr

HER represents a vibrant, young audience and stays connected by actively engaging on social media. On the HER Tumblr page, for instance, the team posts inspiring photos, quotes, and stories aimed at LGBTQ women. Anyone can scroll through this engaging assortment of Vocabulary Terms, HER awards, Relatable Posts, and adorbs photos to get a sense of what HER is all about.

Using the hashtag #DearHER, hundreds of members reach out to share their experiences, advice, and appreciation with the HER team. “Joining HER was one of the most affirming, stimulating, and fulfilling LGBT+ experiences I have had,” wrote Tia Curtis, HER’s Philadelphia City Lead. “To have the opportunity to have a part in representing women of color, inclusivity, and diversity for such a successful cause is both intimidating and liberating.”

On Tumblr, HER amuses, inspires, and supports users with unique and shareable posts.

The We are HER Blog, another fantastic outlet, is all about bolstering the community and getting people talking. The blog poses daily questions to users on topics ranging from family history to political leanings. Whatever the question, it often gets people chatting on the app and sharing common interests.

Additionally, with the Ask the Community feature, you can pose a question of your own on HER and get involved in a global conversation between LGBTQ women.

“I’ve made so many new friends! The articles posted by HER are so funny and it’s really easy to chat to other queer women as they’re all so friendly,” wrote Sophie, a 24-year-old user from California.

Many Satisfied Users Heap Praise on the Dating App

Over the years, HER has helped many people find the connections they were looking for. This playful, accepting community forges common bonds between those looking for love, in all different forms.

One anonymous user wrote in to thank HER for introducing her to her future wife. After signing up due to boredom and curiosity, the woman received a message from someone “who was dreadfully boring, to be honest,” she recalled. “Yet there was something that kept me talking to her.” Night after night, their conversation continued and their flirtatious connection deepened. “I fell in love with the dreadfully boring girl who messaged me on HER,” she wrote. “I was in love with someone when I didn’t think it was possible. I hope hearing our positive experience put a smile on your face.”

“I was on all of the dating apps, but HER was the one where I felt I had the best chance of meeting someone really wonderful. Without HER, I would never have met this incredible girl, and I never plan on letting her go” — Molly and June, a couple who met on HER

The app’s overall inclusive and non-binary atmosphere is a breath of fresh air to many LGBTQ women and transgender men who might feel marginalized on other sites. On HER, individuals are given room to create their own dating experience. “I couldn’t have found a better app than HER,” wrote Hannah, a 21-year-old user in Melbourne, Australia. “I don’t need to worry about whether I’m a lesbian or bisexual. It’s just loads of women I can chat to.”

Ladies’ Choice: HER Offers You a Unique Social Experience

LGBTQ women use dating apps differently — their goals, preferences, habits, and styles are subtly different as a whole. Robyn has seen the dating challenges facing lesbians firsthand and now caters to their desires with HER.

HER users enjoy a straightforward interface, a trustworthy user base, and an open-minded vibe.

This app defies the typical hookup culture of mainstream dating websites by offering personality-based tools so women get to know one another in a more flexible and friendly environment.

From gender verification to posting popular lesbian events, HER’s features cater to the needs of lesbian, bisexual, and queer women and transgender men worldwide. Their match-based approach to chatting ensures that you only talk to people who genuinely interest you, allowing users to form deeper social connections on any mobile device.

Whether they prefer flirting via the app or mixing it up in person at an event, HER hooks people up with the social experience that suits each woman’s individual style.

“What’s unique to our community is there’s a social level that a lot of women are looking for,” Robyn told us. “A lot of [our users] are looking to make friends and meet other women in the community, and that’s the value we can add.”