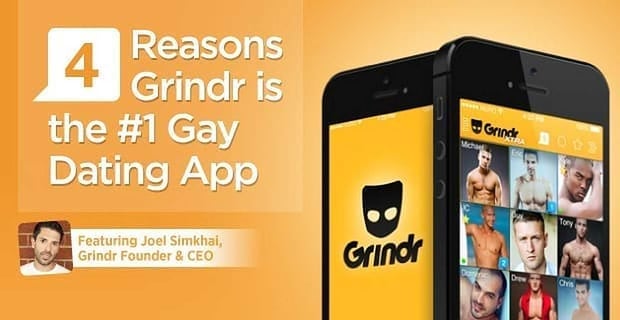 TL;DR: As the first all-male meet-up app, Grindr dominates the market like no other and has become the largest mobile network for men in just five short years.

With more than 10 million downloads, 5 million active monthly users in 192 countries, mentions on shows like “SNL” AND available via iOS, Blackberry and Android, Grindr has a lot to brag about.

But Grindr is so much more than just impressive numbers and facts – it’s also a company that’s committed to its users.

We were lucky enough to speak with the man behind the company, Founder and CEO Joel Simkhai, to learn more about Grindr’s history, what makes it stand out and how the team is helping its members and the world.

Simkhai, who was born in Tel Aviv, Israel and immigrated to New York when he was young, has a background made for success, with degrees in international relations and economics, as well as jobs in finance, journalism and the startup industry.

But a successful career wasn’t the only thing Simkhai wanted – he also wanted a successful dating life. And what better way to do that than to build an app that would tell him where other gay men are?

Grindr was born soon after that and quickly became a global phenomenon.

In just two years, Simkhai went from working in his living room to working in a Hollywood office, all thanks to praise from Grindr’s first users.

“I come from a family of entrepreneurs, and I learned from an early age that you have to be passionate about what you do and create a product that customers will find useful and enjoyable,” he said. “But more importantly, your product has to solve a problem. As a consumer company, it’s all about your customers – so we listen, stay connected and work as hard as we can to keep making a product they will continue to use and enjoy.”

Whether you’re looking to meet up or chat, Grindr has the features for you!

Besides being able to see where potential matches are and chat with them, Grindr and Grindr Xtra, an ad-free subscription service with premium features, also allow users to tag someone as a favorite, only show those who are online, save phrases, see another person’s dating “stats” and more.

“The notion behind Grindr for Equality is that we can leverage our user base to help advance gay rights,” Simkhai said. “We’ll send out in-app messages to our users that have specific calls to action. It might be to vote, to call an elected official, to go to a rally, to donate or to go to an event. It’s basically just to do something – have our voices heard.”

Grindr uses its large user base to to organize and fight for LGBT rights.

“Grindr for Equality delivered significant, tangible results with nearly hundreds of thousands of users so far, who have tapped on the in-app messages to sign a petition, donate money or participate in a specific call to action this year,” he continued. “We’ve helped create awareness about HIV/AIDS treatment and testing, encouraged our users to use their voice and move the rights of our community forward.”

While Grindr just launched a redesign of its profiles, making it more sexy and visually engaging for users, there’s so much more on-deck.

“As for what’s next, we’re always looking for ways to make it easier and faster for guys to meet,” Simkhai said. “I think there’s a lot more we can do to simplify the process and make it better.”

To learn more about Grindr and all of the wonderful things the company does, visit www.grindr.com.

How to Get the Summer Fling You’ve Always Wanted

6 Questions to Ask Before Reconciling with an Ex