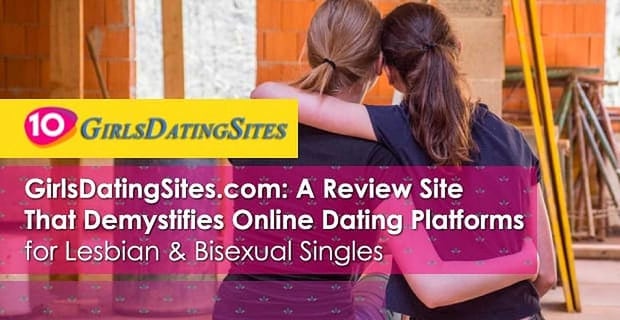 The Short Version: While hundreds of websites are designed for lesbian and bisexual singles, many women lack the time — or the money — to fill out dozens of dating profiles. GirlsDatingSites.com, a review website that ranks the best online dating and friend-making platforms for lesbian and bisexual women, is focused on solving that problem. The site rates dating platforms and lists user reviews, and pros and cons for each. Ultimately, the scene can be challenging for women who date women, and GirlsDatingSites.com simplifies the options for those who don’t want to waste their time on sites that won’t find them a match.

According to a recent poll, 56% of LGBTQ singles 56% LGBTQ singles have dated someone they met online. That represents a significant percentage of the community.

But online dating isn’t always easy for lesbian and bisexual women. On some dating platforms, lesbian and bisexual singles may find themselves propositioned for anything and everything except a meaningful relationship. That is why many women turn to sites specifically designed for them — winnowing down the dating pool.

But even on dating websites designed for them, lesbian and bisexual daters can face their share of problems. Just because lesbians and bisexuals like to date women doesn’t mean they want to date just any woman.

And the problems that befall most dating site users aren’t just for straight people.

GirlsDatingSites.com is designed to solve those problems for those singles searching for suitable partners.

The website ranks 10 of the world’s best dating platforms for lesbian and bisexual singles.

GirlsDatingSites.com gives each dating platform a one- to five-star rating. The star rating is correlated from five individual star ratings — including the chance of getting a date, privacy protection, features, customer service, and value for the money.

In addition to star ratings, GirlsDatingSites.com describes each dating platform in detail, so you don’t have to waste your time creating a profile on a website that won’t help you find women with whom you’ll connect.

GirlsDatingSites.com is designed to put you on the right path to finding a dating site that will fit your bill. These dating sites are meant only for lesbian, bisexual, queer, and pansexual singles, so you’re not going to be searching for a small percentage of women like you would on larger websites.

The site also makes sure you won’t be overwhelmed with options. It doesn’t list every lesbian dating website, but instead chooses 10 of the most popular to rank and review.

Still, the websites chosen run the gamut in terms of the users they attract.

For example, BiCupid is the website’s top-rated dating platform. Described by GirlsDatingSites.com as a “place inhabited by broad-minded people who swing both ways,” this platform would likely be more appropriate for bisexual women, rather than lesbians.

Platforms are reviewed on five areas, including the chance the user has of getting a date.

Pink Sofa is another niche platform for lesbian and bisexual daters, designed for women over 30 to meet and form a community. GirlsDatingSites.com calls this platform a “community where people talk about their mutual interests.” This website may appeal to women who are more interested in having a neighborhood potluck than hitting the town for a date.

The site describes the FindFemmes platform as “a unique website where those who are interested in feminine lesbians can go to meet femmes.” FindFemmes likely would be appropriate for queer women interested in dating less androgynous or masculine partners.

While many of the websites reviewed by GirlsDatingSites.com are specific to a sexuality, age, or gender presentation, others are less niche. These let users make queer women friends of all nationalities and backgrounds. Like Pink Cupid, which helps connect “women from many countries all across the world.”

GirlsDatingSites.com doesn’t just rank dating platforms with a hard-to-understand system. Instead, it gives users plenty of information about how the star rating was determined and delves into more detail about each platform’s useful features.

Each profile on GirlsDatingSites.com gives a detailed picture of a platform’s features. Most reviews consider the countries where the platform is active, methods for joining the site, and cost. The ranking also considers user reviews and the pros and cons of each website’s technology, clientele, and means of interacting.

In a review of a website GirlFriendsMeet.com, GirlsDatingSites.com editor Totti ranked it a 3.9 out of 5 stars. Overall, Totti found GFM to be a positive experience, noting its open discussion forum and advanced search features as some of the pros of the site.

While the emphasis of most dating platforms is on finding romantic partners, others certainly aim to build communities of lesbian and bisexual women.

The website’s review of the platform One Scene emphasizes the idea that some queer women are looking to expand their social circles, not just find dating partners. In describing the platform, GirlsDatingSites.com calls it a “fun and judgment-free space where you can find good friends or a date.”

Wow Women Dating also focuses on the social element of meeting women of compatible orientations, noting that it is a “safe place where a lesbian could meet other lesbians for socializing.”

For lesbian and bisexual women, building a feeling of fellowship can often be as important as finding a significant other. Sometimes, queer women can be isolated from families, religious communities, or may be the only lesbians or bisexuals in their communities.

That is why GirlsDatingSites.com also aims to build its own community through its blog. The blog includes insightful articles that are relevant to women who date women.

Lesbian and bisexual singles can learn more about the community on the GirlsDatingSites.com blog.

No queer woman wants to spend hours building her dating profile with just the right blend of wit and sincerity only to find out that she wasted her time. They also don’t want to log onto a lesbian dating app that’s a barren wasteland, or the one that’s full of women who just want to hook up when you’re looking for a meaningful relationship.

GirlsDatingSites.com lets users know what they can expect before creating a dating profile. That way, users can navigate directly to a site that will fit their bill. Lesbian and bisexual singles want to spend their time finding the right person, not searching for the right dating platform.