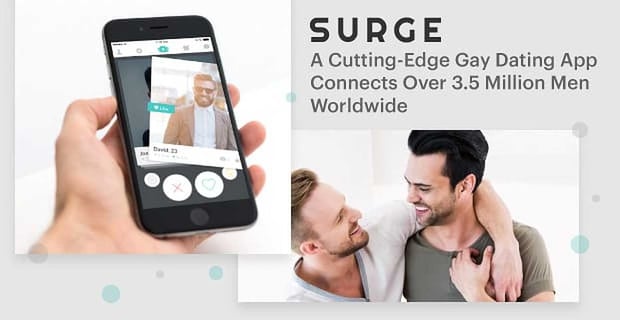 The Short Version: Single men don’t have to label themselves (or their dates) on Surge, a gay-friendly dating network. The app takes all comers and helps them feel at ease in the LGBTQ+ dating scene. With simple swiping features and fun communication stickers, Surge creates a low-pressure environment for making a friend, landing a date, or building a relationship. The app supports a fast-growing network of gay, bi, queer, and curious men around the world. Over 3.5 million men have joined Surge and thousands more sign up every month. Since 2015, Surge has operated under the motto “no labels,” and the team works hard to make all members feel safe, valued, and supported as they navigate online dating.

Not every man feels comfortable showing up at a gay bar and basically outing himself in the local community just to get a date. It can be nerve-wracking to approach a guy in such a public and unforgiving scene. Some gay, bi, or curious men aren’t out, loud, and proud, so dating can be a significant challenge for them.

Fortunately, LGBTQ dating apps allow users to connect in a private, friendly, and judgment-free space. Since it launched in 2015, Surge has become a trendy option for gay, bisexual, and queer men in the US and abroad. The dating app, available on iTunes and Google Play, has distinguished itself as a niche social networking platform without labels or limits.

Surge’s team has spent the last couple years observing dating patterns and building up steam in the industry. The tech company got its start in 2013 by launching an LGBTQ dating app called Lavender. This platform served all LGBTQ+ singles, but the team soon realized its services would be more helpful if they specialized by sexuality. So they re-branded and launched Surge for gay and bisexual men. Then, in 2017, the team released Zoe for lesbian and bisexual women. Both apps use cutting-edge technology to connect same-sex daters to one another.

Today, Surge boasts over 3.5 million registered users of all ages and backgrounds. The app is proud of its diversity and invites men of all stripes to sign up for free. Whether you’re searching for a one-night stand or a lifetime love, this app can introduce you to a world of possibilities in the gay social scene.

“We want to be different,” said Sunethra Boyinova, Surge’s Creative Manager. “We don’t want to be for just hookups. We offer possibilities to choose from and provide a space where users can find the love of their lives.”

The Surge team doesn’t think a million flashy features do mobile daters any good, so they’ve boiled their niche app down to the basics. Its clean, simple, and user-friendly interface helps men connect without fussing with unnecessary or inefficient matching tools. As a result, Surge fosters a highly interactive social network; every month, users send over 10 million messages on the app.

Because all communication is based on mutual attraction, Surge is an engaging and fun place to arrange a date.

Let the flirting begin! On Surge, all you have to do is click “like” to make a mutual match and start a conversation. Men swipe through date prospects to narrow down the dating field to viable and attractive singles. Feeling private? You can always activate Private Mode to ensure that only guys you’ve liked can see your profile.

If you really want to make an impression, you can Power Like your favorite cutie. According to the FAQs page, “This is the fastest and most direct way to let a guy know you really dig them.” All members can only use one Power Like per day — unless they buy a pack of Power Likes or earn free Power Likes by updating their profiles.

Surge’s premium members don’t get extra Power Likes, but they are able to see who’s liked them, access their own liking history (and maybe change their mind on a few passes), view the private photos of mutual matches, and change their location settings.

While the majority of its users live in the US, Surge has members in countries all over the world. The membership’s average age is 18 to 30 right now, but Sunethra said the team isn’t looking to pigeonhole the app to any age group. “Surge is for all,” she said. “We want to have variety in the men who join.”

Surge boasts a fast-growing global dating network, adding more than 33,000 Apple users and 87,500 Android users per month. Roughly a third of those new users hail from the US. Even as the app’s membership grows by leaps and bounds, however, the team concentrates on satisfying individuals, responding to feedback, and cultivating a friendly neighborhood feel.

“Our aim is to make the app more personalized,” Sunethra said. “We’re creating a system to make people communicate more and be interested in each other.”

A Lean Team on a Remarkable International Mission

“We care about our users’ feedback,” Sunethra said, “and we try to implement as much of it as we can.”

Ultimately, when Surge is successful, it changes lives. Not only does the app connect singles who may never have met otherwise — it also creates a safe and inclusive space where men feel free to be themselves. Not every LGBTQ man feels comfortable coming out in his city or country, but on Surge he can let go of those fears. Sunethra told us the team takes this mission to heart and does everything it can to spread love and acceptance.

The Surge customer service team is attentive to the needs of modern daters.

“I have been approached by the admin and was able to address some issues with the app,” said Mick, a Surge premium member. “I happily rate this app as a five-star app.”

Love Stories From the App’s Ambassadors

Even though Surge is still new and growing, it has already collected quite a few success stories from men who found their special someone on the app. You can become a Surge Ambassador to share your success story with the team and help spread the word about this unique gay-friendly community.

“He was my first match,” one satisfied user said. “We met up for coffee shortly after talking on Surge, and we immediately connected. Ever since, we haven’t been able to spend more than a few days apart.”

Another anonymous Surge user said that he was starting to doubt he’d ever fall in love when he matched with an attractive guy who was wearing a doctor’s coat in his profile picture. They fell for one another on their first date. “I never truly felt love until I met him,” the lovestruck user said. “He’s completing med school next year. Things are going amazing so far.”

On Surge’s blog, you can follow the latest developments with the app and in the gay community. The app’s team loves to engage with readers and get them excited about socializing, dating, and networking all over the world. Recently, Surge selected one of its members, known as the Travel Guy, to spend eight days dating 20+ Surge users in four European cities. This series highlighted the fun, nervousness, and hilarity of dating nowadays.

“Just to sit there talking and laughing with the never-ending romantic ambiance was truly touching,” Travel Guy wrote after spending a day in Rome. “I have so many moments and memories from this trip that I will cherish forever.”

Surge: Where Singles Can Flirt Without Labels

Some gay men wear their rainbows on their sleeves (sometimes literally), while other men would rather keep a low profile as they search for hot dates. Gay bars can be a bit much for singles who value their privacy, but dating apps can provide the same kind of social environment and date options without the public scrutiny.

In a few short years, Surge has become one of the top gay-men dating apps in the world. Its rise in popularity is a credit to the friendliness, inclusiveness, and responsiveness of the small, hard-working team. Millions of users have enjoyed the app’s straightforward and effective matching system, which cuts the coyness out of dating by just letting guys say “Hey, I like you.”

If you’re looking for a friend, a date, or a significant other, we absolutely recommend trying Surge’s all-men dating network. Whatever your age or orientation, this app has a place for you.

“We are inclusive and open to everyone,” Sunethra emphasized. “Our focus is on growing our community as much as possible.”