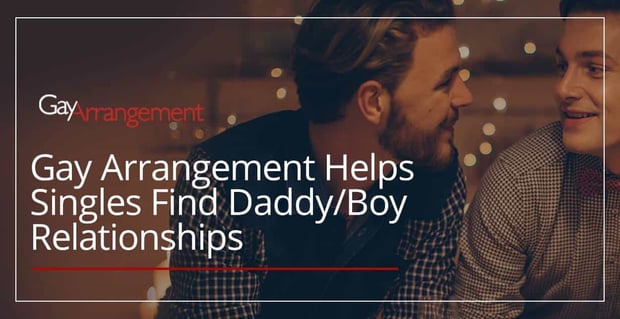 The Short Version: Some gay and bisexual men prefer a daddy-boy relationship dynamic, which typically involves an older, well-established “daddy” and a younger, more submissive “boy.” Men seeking those relationships often turn to Gay Arrangement, a platform that connects daddies and boys worldwide. The dating site has established a reputation for safety and privacy over its 13 years in operation.

Alexander Cheves, a writer for The Advocate, describes what a “daddy” is in gay male culture, even though he admits that no consensus exists.

“Daddies are sexy, daddies are kinky, daddies are typically older (but not always), and daddies are loving,” Alexander wrote in an article for The Advocate. “Nobody can agree on what a daddy is exactly: Is he a kinky dominant? A trusted friend? A source of financial aid? A muscular body? A smaller body? A hairy body? A boy-chaser? Or all the above?”

Alexander wrote that daddies can be one, all, some, or none of those things, and many men find intergenerational partnerships with daddies appealing.

Alternatively, a daddy seeking a boy may desire someone to advise on life and provide for financially. Or he may be looking for a power dynamic in which he is dominant to a younger man.

Gay Arrangement is a dating site that has helped gay men foster those daddy-boy relationships since before they became widely accepted. The platform launched in 2007 to simplify the process of daddies and boys connecting.

Daddy-boy relationships were often misunderstood, even within the LGBTQ community, so it was important for Gay Arrangement to create a safe and welcoming space for users.

“Our goal is to ensure that users are getting a niche site where they feel they can share, open up, and interact with users without fear,” said a spokesperson for Gay Arrangement.

The platform promotes discretion because some daddies and boys may not want others knowing their identities. That focus on privacy is what sets Gay Arrangement apart from similar websites, according to the spokesperson.

“We focus on discretion for our users to keep them long-term,” he said.

Users Can Quickly Create a Profile and Find Their Ideal Match

The spokesperson said that younger men may seek out daddies to learn from and who can help them grow as they continue on their journeys.

“An older man can bring boys out of their current social circles and connect them with people who have more experience. Some daddies serve as mentors, coaches, financial providers, or emotional support,” he told us.

Boys also pursue older men to play the dominant role in the relationship, whatever that may entail.

Both daddies and boys who use Gay Arrangement typically seek straightforward relationships, not just hookups. Though some users desire sugar daddy relationships — in which the older man pays for the younger man’s lifestyle — that is not a requirement. Even if younger men seek financial support, that often isn’t the only reason they’re interested in a daddy.

“There are users on our site who are looking for a financial relationship, but by and large, we find that those relationships become long-lasting,” the spokesperson told us.

Most of the platform’s users are men in the United States, Europe, and Australia. The platform has a growing user base in South America and Asia, as well. Boys typically fall into the age range of 21 to 28, while daddies are likely to be 39 to 55. Most daddies on Gay Arrangement are well-off men in professional trades, and some have had enough financial success to be nearing retirement or early retirement.

“All of our users are intrigued by age-difference relationships. Our younger users are interested in dating older men, while our older users want to date younger men. Some of them are new to these feelings because daddy-boy relationships were stigmatized not long ago,” said the spokesperson.

Promoting Safety for Hooking Up and Dating

Years ago, men seeking daddy-boy relationships could face ridicule or shame. Some people didn’t understand the appeal and assumed that boys just wanted older men to pay for their companionship.

“In the past, it was taboo to have this type of relationship,” the spokesperson said.

Because of that stigma, Gay Arrangement aimed to be user-friendly and safe from the beginning. Though daddy-boy relationships have become more socially-acceptable, that doesn’t mean safety and privacy are no longer critical.

That’s why Gay Arrangement users must register with an email and secure password as part of the account verification process. During the screening, users must prove they are who they claim to be. That provides other users with peace of mind and allows all members to interact freely without worrying about catfishing or scams.

Users are so impressed with Gay Arrangement’s functionality that the website has a 97% retention rate.

Though it is more socially acceptable to seek a daddy-boy relationship today than it was when Gay Arrangement launched, that doesn’t mean it is easy to find the right person. Gay Arrangement offers a place where daddies and boys can clearly state their desires and preferences.

The platform has many fans who suggest it serves its purpose of connecting gay men.

Kyle N. praised the intuitive interface, writing: “Easy to use and to the point,” adding that he’s “met some great guy on here.”

Paul S., who identifies as a daddy, wrote that he can find meaningful relationships on Gay Arrangement. “I’ve used several other sites and I have found this one has the most boys,” he said in an online testimonial.

Gay Arrangement wants to ensure it is as relevant to users today as it was more than a decade ago. With that goal in mind, the team continues to upgrade the website and offer users more functionality, including verification, video calling, and security features.

The platform also plans to roll out apps for iOS and Android.

“We’re finding that users have already moved over to smartphones, so we want to make sure we keep up and put the best experience out there,” the spokesperson said.

Though the Gay Arrangement team plans to update its website soon, it still aims to serve user needs.

“The only time we see people cancel or walk away from the site is when they find a long-term relationship. We’re okay with losing users that way because we know we’ve helped them find what they’re looking for,” said the spokesperson.