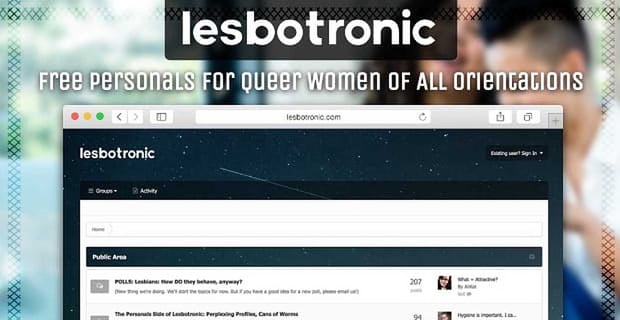 Lesbotronic Cuts the Nonsense Out of Online Dating: Free, Private Personals for Queer Women of All Orientations

The Short Version: Free, private, and secure, Lesbotronic accepts queer women of all orientations (lesbian, bisexual, trans, polyamorous, or questioning) in a worldwide social network. From Internet pen pals to full-blown relationships, the dating site fosters any type of connection without judgment. Lesbotronic doesn’t want to waste singles’ time and uses realistic matching based on mutual interest to cut to the chase of online dating. The best part: This lesbian-owned-and-operated dating site promises to be 100% free for members — forever. Through in-depth profiles, personal member screening, and an advice section, the website cultivates a sincere and down-to-earth dating atmosphere for like-minded women.

My college roommate has always walked to the beat of her own drum. She actually goes out of her way to not match her clothes and accessories. She’d strut to class in a mustard-yellow top, green plaid skirt, plastic purple bracelets, red bangle earrings, and a robot necklace to complete the ensemble. She stands out wherever she goes — and damned if she doesn’t make it work for her.

When she came out as bisexual a few years ago, it was with utter triumph. “I have twice the dating options that you do now,” she told me.

But, as it turned out, her new open-ended dating experience wasn’t quite so simple an equation. She’d always been adept at dating apps and websites, playing the field at her leisure. Suddenly, that all changed. With just an orientation update, her prospects started to dwindle instead of double. She was soon complaining about close-minded people and considering opening two accounts — one where she identified straight and the other where she identified gay.

To my surprise, my friend was soon convinced that the general population isn’t accepting of bisexuality — or at least not in terms of dating. She needed a niche place where singles would be more open to her out-of-the-box way of being.

That’s the role that Lesbotronic fills, attracting queer women of all orientations on their dating site. It doesn’t matter if you’re a lesbian, trans, questioning, polyamorous, or bisexual — on this site, relationships and identity are treated as the fluid concepts that they are.

Lesbotronic breaks the mold by setting realistic standards while catering to a queer audience.

The site provides an ethical, free, and tolerant place for women to find pen pals, friends, partners, or lovers (depending on their preferences).

Creating a Profile — Always Free and Approved by a Real Person

According to the site, Lesbotronic’s dating services are “100% free, now, later, for everyone all of the time, all subscription options free. No jokes, no bait-and-switches, no fraudulently tricky this that or the other thing, just… free.”

In fact, the team promises that if you can find a place where a member is required to pay anything, they’ll give you money. That pretty much guarantees they won’t ever charge members anything to join.

When you sign up, using a valid email address, Lesbotronic asks you to give your age, geography, education, sexual orientation, gender expression, ethnicity, and relationship status — as well as what you’re looking for in these areas. You can choose up to five additional cities (besides your own) from where you would like to see people’s profiles.

The lengthy profile setup also takes into account your attitudes about smoking, alcohol, television, music, children, pets, food, politics, traveling, sexual interests, and other relevant details. The answers often have a sense of humor, too, so under “What do you do to pay monthlies and buy toys?” You can answer “My career is still in the embryonic stage” or “I’m way too mysterious to tell you now.”

In-depth profiles ensure that members are the real deal, and it doesn’t cost a thing to join and chat.

Creating a profile is entertaining for the jokes alone, but it also thoroughly investigates personality traits, which is helpful when it comes time to search for matches.

For instance, it’s good to know upfront if someone answers, “I go almost everywhere with a huge dog/barking pony.”

After you’ve spilled your guts in the profile setup, you can choose to add a photo or not — but your face has to be clearly visible in all photos you upload.

Then it’s a waiting game (up to 72 hours) until,  according to the site, “one of the actual human lesbians that runs this thing scans your profile with her actual human eyes for appropriateness.” They’re rather strict on this point and will kick out spammers, trolls, and anyone who seems insincere or inauthentic. Time wasters are not tolerated.

“Yes, we know the brief delay might be a little frustrating for some of you,” the Lesbotronic team wrote. “But if we didn’t human scan new profiles, our database would quickly become riddled with Complete and Total Wankers.”

Dating websites sometimes necessitate combing through mismatched profiles, browsing past people who aren’t looking for what you’re looking for, until you find someone aligned with you. Lesbotronic finds that system tedious and ineffective, so they streamline online dating with reality-based sorting.

This means that when you conduct a search, the results will show people who meet your personal criteria and for whom you meet their criteria. It’s mutual interest or no dice.

When you browse through profiles, you can feel certain that every person you see has stated that they’re interested in your demographic. This is uniquely helpful to queer women, who often have varied expectations and desires.

Matching people up more authentically, Lesbotronic saves singles from approaching someone who’s fundamentally not interested. This cuts out what the site describes as a lot of “time-sucking rejection” from online dating.

Still, the site can’t do all the work for you. “Yes, we have thousands of cool members,” reads an FAQ answer on the site, “but you still have to put in some effort on your part to meet them. I mean, it’s not like we’re going to overnight post someone to your doorstep in a big straw basket with a ‘Soulmate Guaranteed’ sticker on her forehead.”

Privacy is a Top Priority So Members Feel Secure Online

Lesbotronic does not publish, share, or sell a member’s personal information to any third-party organization. They’re not in it to make a profit by exploiting anyone’s profile. They guarantee that all profiles are genuine and protected on their site.

“Our personals are as private as possible, yet still function via the Internet,” reads the site’s privacy FAQ. “If you want to meet new people even more privately than our personals, you’ll have to go off the Internet.”

The privacy of all members is taken seriously on Lesbotronic, so absolutely no profiles will be disseminated, syndicated, or used for any other purpose but the individual’s dating goals.

Down-to-Earth Tips in the Advice Section & Discussion Board

As a lesbian-owned-and-operated website, Lesbotronic has valuable insight into the queer dating experience. Not afraid to give singles a reality check, the advice for lesbian personals section takes on a tell-it-like-it-is tone when offering dating tips to singles.

“We do have a good bit of experience,” the page reads, “based on not only our own collective trials and tribulations and successes and screw-ups finding partners… but also what we’ve heard from thousands of other women.”

The site quickly adds the caveat that they aren’t magical lesbian-dating miracle workers — they only claim that their advice can be useful for some people.

Plus, it’s free so there’s no harm in hearing them out.

Lesbotronic hosts a public area for open discussion about LGBTQ and relationship issues.

From general recommendations to potential pitfalls, the advice section stocks a varied collection of pointers. As always, it’s given in an upbeat, playful, and wildly funny voice. “Shyness won’t get you anywhere on the Internet,” one post advises.

A discussion forum on the site also offers support in a more peer-to-peer system on topics ranging from body talk to queer politics.

At Lesbotronic, Open & Honest Singles Find All Kinds of Relationships

Lesbotronic lives up to their awesome name, welcoming queer women of all stripes and backgrounds. Anyone transitioning, questioning, closeted, or openly lesbian can join and mingle in an accepting space online. People like my roommate can feel free to display their full colors with pride in a dating pool that caters to individual preferences.

With high standards of privacy and a promise to remain free forever, the dating site supports members looking for varied, nontraditional, and altogether queer connections.

“We strongly encourage members to expand their range by seeking a variety of connections on the site,” the Lesbotronic team said, “not just the ‘old-fashioned’ or ‘traditional’ idea of personals, where you look for one person for one sort of ‘relationship.'”