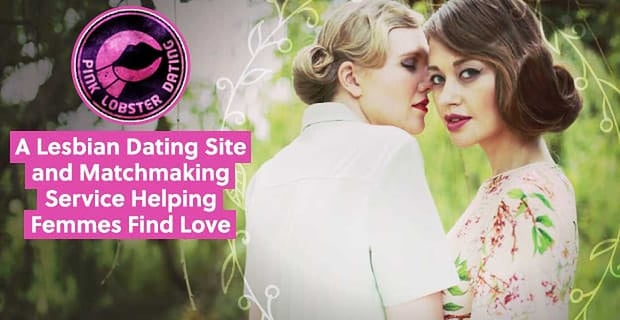 The Short Version: As an entrepreneur and lipstick lesbian, Juliette Prais created Pink Lobster Dating at the end of 2012 as a safe place for femmes to meet other femmes. With the growing success of her site and the many requests for a more customized experience, she began to host lesbian group events and now has expanded her brand to provide professional matchmaking services.

Four years ago, Juliette Prais found herself reflecting on her time as a single woman, when she was naive to the hostility in online dating toward femme lesbians like herself.

As a femme, she was frequently questioned on how lesbian she was — by heterosexual couples looking to spice up their love life with another woman and even other homosexuals who thought she didn’t look lesbian enough.

Sexual proposition after sexual proposition on sites like Plenty of Fish and Match, plus the negativity in her own community, left her feeling uncomfortable and unsafe. While the mainstream sites didn’t cater enough to her needs, many of the gay-focused sites and apps were being used solely for hookups. Juliette was finding it increasingly difficult to date online and actually meet someone as sincere about a relationship as she was.

So she kept busy teaching at a university, running side ventures like performing spoken word poetry, and coordinating community events, but whenever she met new people in her community, their concerns and experiences were so similar to hers and she knew she wanted that to change..

“I found there just wasn’t a site for people like myself out there, so I did even more research, spoke to a lot of people and business mentors,” she said. “They all responded by asking me why I wasn’t just creating my own site.”

With the support of her mentors, friends, and the broader LGBT community, she developed Pink Lobster Dating, a safe place for femme lesbians looking for love in the United Kingdom and the United States.

Juliette Created a Safe Haven for Femmes like Herself

Juliette’s story isn’t unusual. In fact, one of the biggest issues facing women seeking women is an environment conducive to creating that connection. (Another concern revolves around making the first move, especially when it comes to femme lesbians, who are frequently pegged as straight in the general mixed sexuality dating scene.)

Juliette Prais, right, and Emma Ziff, are the leading women behind Pink Lobster.

As her search for a personal solution came up fruitless, Juliette started planning the safe haven she envisioned: a closely monitored pool of women who wanted the same things as she did. Not only did she create rigid guidelines to ensure everyone was who they said — women interested in other women — she also provided fun activities to help her community take the first and necessary steps to forge a relationship.

“One of the things I was really passionate about from the beginning was making it a place for women to find love,” Juliette explained that many dating apps perpetuated the sexualization of those who identify as LBTQ, so her Pink Lobster arrived at the end of 2012 as the niche femmes needed.

Pink Lobster Dating also contracts experts, from facial profilers to psychotherapists to legal counsel, to provide users advice and help regarding topics of interest to them. For example, Harjit Sarang, Pink Lobster’s legal counsel who specializes in LGBT issues, has been with the company from the beginning, and she was extremely sought after when marriage equality was contested.

“We had been providing matchmaking for years, just not formally,” explained Juliette of the new service that provides both matching and coaching to its clients.

Pink Lobster hopes to help its users find companionship, as the name suggests. “My sister actually came up with our brand because lobsters mate for life,” she said of the notion perpetuated by Phoebe in Friends. “And pink is often synonymous with lesbian.” Plus, she added, it’s just one of those names you can’t forget.

The final version of Juliette’s dating site went live at the end of 2012, teetering on the new year. It was first launched in the U.K., but now boasts a significant number of users across the entire U.S. as well.

Every new profile is thoroughly vetted to help ensure each woman is who she claims to be — a woman seeking a woman. One of the ways the team at Pink Lobster manages this is by offering free makeovers, including a photoshoot, to its U.K. members in partnership with a popular studio chain.

In the U.S., Juliette and her team go through each profile and provide a free enhancement to monthly subscribers, including helping users choose the best photos of themselves and helping coach profile details to be positive and engaging.

Additionally, for added security, every user must upload a photo of themselves in order to view other users’ photos. They may also choose to take and upload a photo posing with the Pink Lobster logo, provided upon sign-up, to prove the other profile photos are truly theirs.

Another unique feature of the site is its lip words — a fun, graphic representation of the user’s personality. Women can choose from a list of adjectives like “determined” or “cheerful,” or they can add their own to give potential matches a quick snapshot of who they are.

Pink Lobster Lip Words lets other users on the dating site quickly view the attributes of a potential match.

You can search for women by location, and then, to signal interest, users can choose to peck, kiss, or snog (or make out) femmes who catch their eye. As part of the lobster theme, women can privately add matches to their “tanks” to keep track of those whom they like the most and then message them when ready.

Currently, users pay less than $20 monthly for access to the niche market of femme for femme lesbians and the advice offered by the site’s experts.

The experts from the dating site provide an even more hands-on experience for members of Pink Lobster’s matchmaking service. Included in every package from the company is direct coaching and styling in addition to finding a perfect match.

“Our stylists work with them from the inside out to get to know them to provide useful one-on-one support throughout the dating process,” Juliette explained the superior service her matchmaking clients receive.

She also illustrated how much thought her team puts into each match — “We actually interview each match.” Her estimate was that they go through about 50 interviews before sending one match to a client, which means they speak directly with every match and typically go through about 200 people a month to procure just a couple dates.

Pink Lobster Matchmaking offers a specialized service that interviews femmes for you.

As an all-encompassing service, client packages start at about $3,500 to help busy professionals who don’t have the time it takes to successfully find a match online by themselves. The service also provides a support system as most of Pink Lobster Matchmaking clients are over 30 and may not be as well-versed in today’s dating scene.

These services are much more specialized and pull from the dating site’s member list as well as the team’s personal golden rolodexes. The goal is for it to feel more like a friend setting you up with another friend than a foreign blind date service.

For now, matchmaking is mostly limited to the U.K., though as demand grows Pink Lobster wants to provide its service to more of its U.S. fans as well (currently matchmaking is only available in larger cities like New York and Atlanta).

Most of the users of the dating site are under age 40 and those using the matchmaking service average over 30 years old, but either user typically tends to be a busy professional woman. “There are certainly people just browsing for a date online,” Juliette said of her site, “But over 90% of Pink Lobster members are looking for long-term commitment.”

As she plans to expand matchmaking to the U.S., she’s also excited to offer more events throughout the U.K. and U.S., including speed dating, music events, soirees, and group tours of popular locales.

“We actually did a ghost tour recently in London, which was great in bringing the women together,” Juliette said and went on to explain that it’s recommended to do something either very scary or very funny on a first date to get the rush of endorphins that helps in forming a bond more quickly.

For now, her focus remains on building up the Pink Lobster user base so there are more options for femme lesbians across her dating site to attend her events and to use her matchmaking service.

“I want Pink Lobster to be a place for femmes to straightaway feel like they belong,” she said.