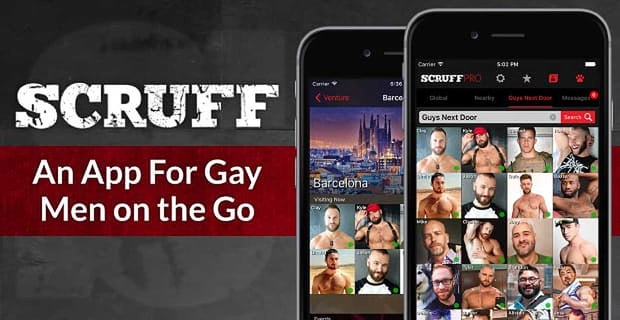 For Gay Men on the Go — SCRUFF Helps You Plan Your Trip With Its Global Singles Database, Event Listings & Travel Advisories

The Short Version: While the SCRUFF app was inspired by the gay men who embody a more masculine look, you can find just about any kind of guy in its database of over 10 million members worldwide. While most apps focus on hyper-local hookups, SCRUFF instead helps gay men socialize better globally, especially while traveling, thanks to its search and chat functions. With the Venture feature, the new SCRUFF 5 release reinvents gay travel by listing upcoming social events and queer-owned room rentals, showcasing local ambassadors to provide city insights, and sending travel advisories to alert members of potential dangers like criminalized homosexual activity.

It means a lot to Johnny Skandros to be headquartered in New York — the city that started his brand — especially after bootstrapping it from his parents’ house back to the Big Apple when getting it going.

Johnny Skandros, Co-Founder of SCRUFF, travels the globe to promote his brand.

The year was 2009, and Johnny was wandering around the city when he noticed a scruffy gay aesthetic emerging. Inspiration struck, and Johnny called up his friend Eric Silverberg to say, “OHMYGOD, I’ve got the name for our app — SCRUFF!” (Eric’s response was described as several excited yeses strung together.)

They were planning to build the best gay social app out there, after being disappointed with what was on the market at the time, and now it had a name. Eric got to work writing the code, and Johnny began to craft the image of their new app.

SCRUFF landed in the App Store in 2010 and has since undergone several key developments that have only grown its reach and user base — now at 10 million members worldwide. Recently released for iOS, and with an Android version in the works, the SCRUFF 5 update adds loads of new features including the SCRUFF Venture branch dedicated to helping gays travel better and safer.

When we spoke with Johnny, he explained SCRUFF has seen explosive growth because of all the extra customizable features it offers over competitors. Plus, he went on, it’s the first gay social app to really capitalize on how much gay men travel.

With SCRUFF Venture, members can search by location for guys in any part of the world and even add their itineraries in order to show up in other user searches at the right times while traveling, a unique advantage since most other apps focus so much on locality.

“The gay community is global and diverse,” started Johnny. “Why would we want to limit ourselves?” He told us that a lot of app users actually seek out guys and chat before traveling to a particular area so they “know” someone when they land.

Friendliness among users is something SCRUFF has worked hard to foster. While the app has always had a robust list of events for various cities, in the newest version of the app, members in popular destinations have been able to volunteer as travel ambassadors to give visitors the downlow on the best places in their town.

Part of providing better travel experiences, a large focus for the app, includes added safety features and advocacy. In addressing the way some governments were using gay app’s GPS functionality to “hunt” homosexuals, SCRUFF Venture only lists user location by city, not by how close they are to anyone else in real time. Additionally, when users enter one of the 75 countries that criminalizes homosexuality in some way, they’ll receive an alert of all the laws and their punishments, which helps SCRUFF members stay informed and travel more safely.

Another big update that came in SCRUFF 5 was additional, more descriptive and searchable profile options — from body hair density to sexual and relationship preferences like polygamy. Members can even select the communities they most identify with like guy-next-door, otter, bear, chub, and more, and they can search by those, too.

The robust search functions help users find exactly what they’re looking for and what to expect from one another. Once a guy catches your eye, send him a “woof!”

“Woofing someone” — a flirty way to signal your interest in another SCRUFF user — “is a great ice breaker if you don’t want to send a chat right away,” explained Johnny.

While SCRUFF members certainly use the app for hookups, a recent survey Johnny’s team conducted showed that more than 50% of the app’s users are looking to chat and date. Many users even find love, he said. “I hear at least one marriage story a week, and I’ve even been asked to ordain!”

Johnny went on to describe the storyline he hears most often: It begins with a woof to someone in a far-flung country, so they just chat casually, sometimes for years. Then, somewhere down the line, they find themselves in the same city, meet up, and there’s instant chemistry because of their SCRUFF history. Whether they just remain friends or actually go on to get married, a relationship is formed from a woof.

There & Back Again — Building SCRUFF from Scratch

After they knew the name and what they wanted their app to do, Johnny and Eric realized it was going to need more attention to become the best gay app available. They quit their day jobs and left New York briefly, moving back home to double-down and focus on getting SCRUFF off the ground.

Once the app was released in 2010, Jason Marchant quickly downloaded it. He was impressed, but he also had some suggestions. After emailing Eric some ideas, he was brought on as the Chief Product Officer to ensure the user-friendliness of the app.

As SCRUFF became more profitable, the trio made their way back to New York and began working in a shared office space with Eric serving as the CEO and Johnny as the Founder and face of SCRUFF. From an appearance on Rupaul’s Drag Race Season 6 to flying across the world promoting and hosting SCRUFF events, Johnny became an integral part of the SCRUFF brand and its success. A few years later, the business was able to take on more employees for development, marketing, and customer support.

Internally, the role of Vice President of Marketing, Media, and Events was created and Joey Dube, who had been working with the company for several years, was promoted to the role.  From attending SCRUFF events with Johnny to managing other key marketing efforts, Joey helped the company take the SCRUFF brand and events to the next level.  From key partnerships with gay clothing brands like Nasty Pig to managing SCRUFF branded events around the world, the marketing team’s efforts grew and eventually the team quadrupled in size.

It’s that level of passion, that has enabled the team to move into their current office, complete with a view of the Empire State Building. If you find yourself looking up at all the skyscrapers surrounding Bryant Park, you might just catch the glint of the sun reflecting off the big metal “S” branding SCRUFF’s 29th floor office.

“I feel very fulfilled that our team has made all of this happen,” Johnny said of SCRUFF’s success. “If you had told me when in the beginning that we would have over 10 million members, I wouldn’t have believed you.”

The company, now about 30-strong, has already outgrown its beautiful Midtown office. Even though it means looking for a new space that’s probably going to cost more to rent and decorate, Johnny couldn’t be more proud of SCRUFF’s trajectory.

SCRUFF has dominated the market with over a million downloads and tens of thousands of reviews that make it a top-rated gay app in both the App Store and Google Play.

Their main priority has been listening and responding to users, like adding relationship status, community identity, and sexual preferences to profiles and expanding options for traveling SCRUFF members.

Staying on top of what their members most desire has allowed them to climb the charts, and if they continue to innovate based on the feedback they receive, SCRUFF is poised to be a must for every gay man looking for fun at home or abroad.