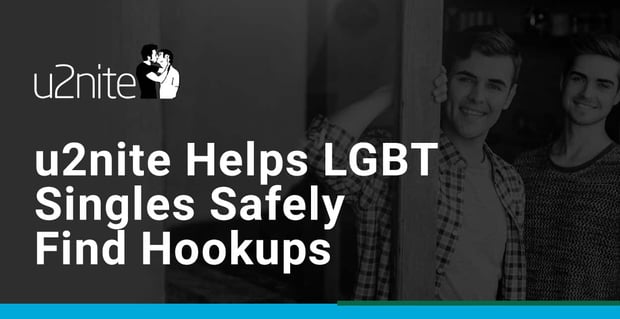 The Short Version: Depending on where you live, dating a person of the same sex can be challenging — or even downright dangerous. Many countries have criminalized homosexuality and banned local hookup apps for gay singles. Fortunately, some platforms have refused to abandon the LGBTQ+ community. Founded in 2013, u2nite is a free dating app that empowers same-sex matching and doesn’t store any personal information that could be used against its privacy-conscious members. The app’s mission is to make it fun and safe to mingle with folks in the LGBTQ+ dating scene.

Many countries have laws that discriminate against the LGBTQ+ community, but some have even denied queer people the right to be who they are.

The Human Dignity Trust has identified 71 legal jurisdictions where homosexuality is against the law. A total of 43 jurisdictions have criminalized being a lesbian, while 15 places have made transgender expressions of identity a crime.

In 11 countries — including Iran, Northern Nigeria, Saudi Arabia, Somalia, and Yemen — a person can face the death penalty for committing homosexual acts.

The u2nite app can discreetly introduce gay singles to date prospects in their area.

Even in places where queerness is legal, it may not be embraced by the general population. Throughout the world, LGBTQ+ people struggle to love and be loved. But they can find support if they know where to look. The u2nite app is dedicated to safely connect individuals in the gay community and protect personal privacy every step of the way.

The daily realities of homophobia can make it difficult for gay singles to find a hookup or relationship, so it helps to have a safe haven in the digital space.

That’s where u2nite comes in. The team behind this app makes safety a priority and upholds LGBTQ+ rights with passion and pride. Privacy isn’t just a buzzword for this crew — it’s part of the central code.

“There is no data stored on any server at any time with this app. It was important for us to make u2nite secure for users,” said Ivar Vage, who founded the gay dating app. “Fighting for the human rights — the freedom to live, speak, believe, and be the human you are — is what all of us should fight for.”

Ivar went to school in San Francisco, and then he worked for Amnesty International in Stockholm, Sweden. He said u2nite is his way of spreading a message of love and supporting people in the LGBTQ+ community.

An App Developed From Location-Based Technology

Ivar said the concept for the app dates back to 2013 when his advertising agency took on a project to work on location-based services. The company is based in Munich, Germany, and worked in partnership with the University of Munich to develop a privacy-focused platform.

Thanks to this project, Ivar said he gained an understanding of how iOS apps work and the security concerns involved. He recognized the ways that privacy issues impacted the dating industry and wanted to create a solution. The more the team discussed the idea, the more they realized it could do a lot of good for gay singles in particular.

All texts and video chats are automatically encrypted on the app.

That’s when Ivar decided to focus on creating a gay dating app that used location-based technology and made communication safer for LGBTQ+ people around the world.

“It was a spin-off of a project we did,” he explained. “Because we were running our own agencies, it wasn’t like a traditional startup. That took quite a while.”

Ivar used his marketing expertise to brand the app for its niche audience. He worked with designers in his firm to create a smooth user interface and graphics. Soon, the team was brainstorming ways to improve the overall experience so that it was safe and fun for gay men to search for hookups and relationships.

They relied on their own funds to create the app. It launched as an iOS app in the Apple Store. From there, it took off in communities throughout the world. The latest version of u2nite was updated in 2020 to include video chat features.

Security for Members Is a Top Priority

All a person has to do to use the u2nite app is download it and start scrolling through profiles. It’s not necessary to enter any private information. No email address. No credit card. Users can search for attractive partners through the Faces view, which features a live feed of current users.

Members can download as many pictures as they want and conduct an instant date search for free.

“What you see is what you get. There are no fake profiles or inactive profiles. This is just what’s on right now. It’s a real-time app,” Ivar said.

The u2nite mission focuses on safety. The team seeks to provide the gay community with the most secure dating app in the world. Its tools deter hate speech, fraud, and harassment while facilitating live chats between real people.

That’s a big deal, especially in light of so many data leaks, hacks, and cybersecurity issues on other major dating platforms.

The secure interface encourages singles to feel safe in the local dating scene.

Ivar told us the u2nite app uses the most advanced encryption technology, which also happens to be used by European governments. No personal information is stored on any server at any time, so the user’s information (including messages and video chats) can never be leaked. The u2nite team uses the highest security backend structure to stop hacking attempts.

An on-map blur filter hides the exact location of the user. Still, gay singles can use the Quick Date function with auto-generated secure map location to find local dates.

Ivar said the technology has attracted singles from all walks of life. Its targeted age demographic is between the ages of 16 and 34. Some users are coming out for the first time, and others are more experienced single adults who are having trouble meeting a new person.

“Imagine, you grew up and you realize you’re not heterosexual and into the same sex. You are pure and young, and you start to explore yourself. In a lot of parts of the world, it’s not good to be the way you are,” Ivar said. “That’s why we want to be very clean, open, and honest in how we operate.”

The u2nite community is all about having fun in a safe environment. Whether singles are seeking a hookup or a long-term partner, they can rely on the app to lead the way and keep details private.

The Quick Date function allows locals to connect in real time. The app will suggest safe public spaces to meet for a first date. The built-in map can offer directions for people who are visiting the city or don’t know the area well.

“Our community loves to travel and go places they don’t know. If you use this function, the app itself picks out neutral and safe places. It even shows you on a map how to get there.”

User privacy is critical in places where just having a gay dating app can put a person’s safety at risk. Ivar said he has gotten feedback from singles who rely on the app for connection and protection — because they could be harassed, arrested, or even killed for being outed on less private forums.

“Getting good feedback is tremendous proof that we provide a service to the community,” he said. “Our users just want to be safe.”

The team is currently working on an Android version of the u2nite app. Looking ahead, the company will need help from investors to expand on an international scale. Ivar hopes to attract investors who care about LGBTQ+ rights and want to help u2nite make the gay dating world a better place.

In ways big and small, u2nite is reimagining what a dating app can do for a niche community. Ivar said he’s working with global brands on a diversity marketing program that will offer users discounts for hotels, food, travel, and fashion.

“This is a totally new way of thinking of advertising,” he said. “It’s just another user benefit of this app.”