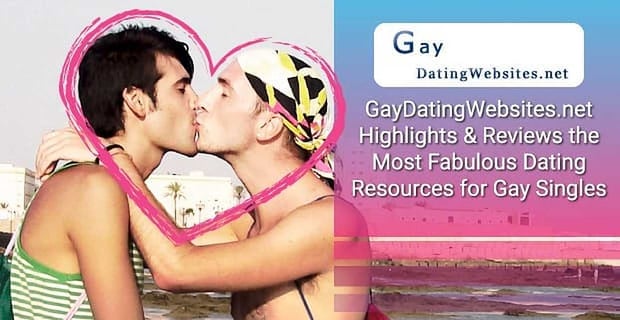 The Short Version: Knowing what you want is easy. Anyone can close their eyes and picture that ideal life with an ideal partner who’s attractive, kind, successful, easygoing, and fun, but finding someone who checks all those boxes isn’t so simple in the real world. Online dating has made it easier by offering niche dating sites where anyone can search for someone who’s exactly their type — the problem is now there are too many dating sites to choose from. Fortunately, GayDatingWebsites.net helps gay singles weed out the good sites from the bad sites with thorough reviews based on customer ratings and an expert assessment of the platform’s cost, features, and ease of use. This reviews site provides information about what it’s like to join and use some of the top gay dating sites around, so you don’t have rely on guesswork when choosing a dating site or app to suit your needs.

Have you ever met someone awesome and thought “How are you still single?” Well, that’s how I feel about this friend of mine who came out as gay in college and yet didn’t date anyone for years. He’s incredibly intelligent, approachable, and good-looking (pretty sure he spends at least an hour a day getting his hair just right), but somehow in his early 20s he just wasn’t meeting the right people.

He tried joining an LGBTQ advocacy group and even went to a few gay bars, but he just didn’t feel comfortable or confident approaching gay guys because he’d spent his adolescence pretending to like women and hiding his feelings for men.

Online dating really helped him come into his own. It provided a safe space where he could get used to the nuances of the gay dating scene and figure out where he fit in. He said chatting with a variety of guys online was like taking a crash course to the gay dating scene. It helped that he chose a men-only platform because mainstream dating sites aren’t always as full of niche options and support as a gay dating site or app.

“One of the most important things to do, no matter which site you choose, is to make it clear what you are looking for.” — GayDatingWebsites.net

If you’re new to online dating or gay dating — or both — you can stay in your comfort zone and meet new people by signing up to a reliable gay dating platform. How do you know which ones are reliable? Don’t worry, GayDatingWebsites.net can offer guidance on that.

GayDatingWebsites.net is third-party reviews site dedicated to helping gay singles, like my friend, find the tools that are right for them. The site’s team of experts have written detailed reviews on the top gay dating sites and apps. Its top 10 lists provide clarity for any gay man wondering where to go to find a date.

Whether you’re still in the closet or out and proud, you can read through the site’s reviews and blog posts to become more informed about how online dating works for today’s gay singles.

Get in the Know by Reading Helpful Full Reviews

GayDatingWebsites.net is a straightforward resource for gay singles feeling unsure about which dating platforms would work best for them. Its reviews provide a a quick summary and star rating on the most popular gay dating sites, and there’s also a more detailed review for those who want to delve a little deeper.

Singles should note that not every dating site ranked in GayDatingWebsites.net is strictly all-men. The reviews team has highly rated a few general dating sites that have a large and diverse user base and inclusive matching tools. These platforms may not target the niche of gay dating, but they have proven successful at helping gay men find attractive date prospects.

Singles can use GayDatingWebsites.net to compare and contrast the most popular gay dating sites.

GayDatingWebsites.net, despite its name, isn’t all about gay dating sites — it also recommends the best gay dating apps. Its top 10 list provides gay singles with a summary of the most useful resources for dating on the go. The reviewers don’t give star ratings for these apps, but simply list them with links to the customer reviews on the App Store and Google Play.

“Since not all gay dating apps are for everyone, it is important to shop around first and make comparisons,” the reviews site explains.

The reviewers encourage singles to look at the membership base, features, and costs associated with each dating app. GayDatingWebsites.net uses a combination of customer reviews and in-house expert knowledge to determine the ranking order of its best gay dating apps.

In addition to its reviews, GayDatingWebsites.net has a blog where experts regularly post gay dating tips. The site bases its topics on popular queries made by gay singles of all ages and backgrounds. Some of them are wondering about gay millionaire dating, while others want to know more about international gay dating.

The GayDatingWebsites.net blog gives pragmatic advice for a variety of gay dating situations. It offers a wealth of information on the online dating scene — including the different between gay hookup sites and gay dating sites — and it also provides guidance for offline dating trends.

“Gay dating sites have the tendency to get rid of the barriers of distance and time. You can easily do a quick search for single gay men.” — GayDatingWebsites.net

“While technology has definitely made it easier for people, especially gay men, to find their partners,” says an article about gay matchmaking, “there is still something unique and exciting if you can actually get to meet someone personally first before you decide to take it to the next level.”

From safety tips to first date suggestions, the blog section expands upon various ways gay men can become more successful daters and get the results they want online and offline. The blog’s top advice for single men seeking romance or love is to be themselves and live life to the fullest by taking advantage of all the opportunities to meet people they can.

GayDatingWebsites.net: A Guide for Men in the Online Dating Scene

When my friend came out as gay, I thought for sure some lucky guy would snatch him up in a relationship within a couple weeks. But, as luck would have it, he wouldn’t meet anyone special enough to commit to until he had learned a little more about how to navigate the gay dating scene.

No matter what your orientation is, you have to understand where to go and what to do if you want to be successful in the dating world. GayDatingWebsites.net can help gay single men with that. This resource is useful for men of all ages because it highlights a variety of LGBTQ-friendly dating sites and apps. The reviewers make a compelling case on behalf of some of the best dating platforms around, and they also provide practical dating advice for singles along the way.

“There are a surprising number of gay dating sites that are highly targeted for a specific market, such as dating in rural areas, hookups, certain values, and other interest-specific criteria,” according to GayDatingWebsites.net. “With the help of our gay dating sites reviews, you can find the most suitable one.”