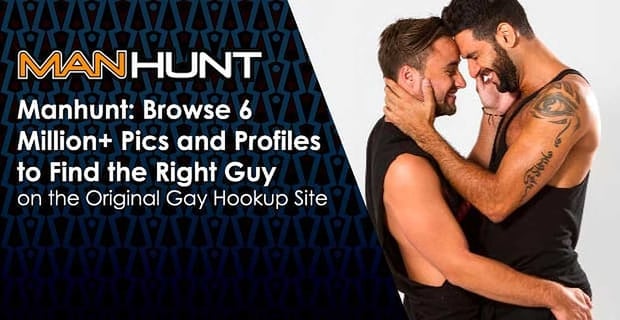 The Short Version: Sure, his beard is trimmed, and his jawline is strong — but gay guys dating online need to see a little more to get to the next level. With Manhunt, one of the first online gay hookup sites, members can see the whole package before deciding to meet in real life. Manhunt allows you to find hot guys from all over the globe and has plans to make your experience even better by optimizing the mobile site and creating a new app. With 6 million photos and profiles, you’re sure to meet someone who gets your heart pumping.

Explicit pictures aren’t my thing. I once connected with a guy on an online dating site, and it felt like mere seconds before I was inundated with panting tongue emojis and pictures of his privates. My girlfriends rolled their eyes at the guy — but one of my gay friends rolled his eyes at me. He asked: “How else are you supposed to know what you’re getting into?”

My friend had been looking to hook up with other guys online, and he had a point: If you’re hooking up, you probably want to see the goods and go from there.

According to one survey, nearly a quarter of gay guys on dating sites are searching exclusively for hookups — and about half of respondents prefer a date but will cut straight to the hookup if it feels right. Almost 60% of guys ask how well endowed their prospective partner is, and 76% say they answer the question honestly. A whopping 83% of guys sent explicit pictures on the quest for an intimate encounter.

Manhunt has been the go-to destination for gay hookups since 2001.

With more than 6 million pictures and profiles, Manhunt has been the premier site for online gay connections since it began in 2001. Unlike other sites and apps, Manhunt users can post and view explicit photos and videos of other members to get their hearts pumping.

“What better than to start a website where gay men can meet other gay men in an explicit fashion — meaning they can share photos of parts of their bodies that they wouldn’t show anywhere else,” said Alon Rivel, Director of Global Sales & Marketing at Online Buddies, Inc., Manhunt’s parent company.

“Many of our members were part of the sexual culture that was only found in gay bars, and we brought that to the web,” he added.

A Pioneering Concept That Quickly Grew in Popularity

Manhunt was founded by Jonathan Crutchley, who originally came up with an idea for helping gay guys connect in 1992.

Alon Rivel is proud of Manhunt’s work in helping gay men connect throughout the world.

“His initial vision was to start a phone line where men could call and speak to hot guys,” Alon said. “It was a way for gay men to come together. Then, the whole dot-com boom happened during the time.”

When Manhunt.net launched in 2001 in Boston, it didn’t take long for it to become popular and expand throughout the world. Today, it is considered an icon in the gay dating site community — from Mexico City to South America and beyond.

More than 6 million men use the site, and it maintains a strong presence in Spain and Brazil — with its core audience ranging from 40 to 45 years old.

Those features differentiate the site from others and are ideal for the simple hook up. But if you’re looking for a little more in a relationship, Manhunt has that covered, too. Users can narrow their search for a compatible man based on shared interests, photos, and, of course, location.

“When you’re gay in a place where it’s not safe to be gay, and you think you’re all alone, you can log on the site and see that there are 50 other gay guys in a 10-mile radius,” Alon said. “Then you know you’re not that different.”

New features on Manhunt include a “Match” feature, that allows users to rate others with a thumbs up, thumbs down, like, or a love — features that weren’t part of online desktop sites before.

Helping a Diverse Group Connect With Their Ideal Match

With members from more than 100 different countries, Manhunt helps guys of all shapes, sizes, and backgrounds find the hookup they crave. Whether you’re on the hunt for gay bears, gay daddies, or twinks, there’s no judgment, just fun.

“We have so many different types of testimonials,” Alon said. “It’s awesome, because, as a gay man myself, I love the idea of helping other guys connect with each other. Whether it’s for sex, fun, coffee, or just to let them know that they’re not alone. It’s really easy to feel like you’re stuck in a bubble, but you’re not.”

ManHunt has location features to show you gay guys near you.

Over the years, Jonathan and the ManHunt team have created plenty of features, including tools for VIP members that make finding a man even easier. Premium features include unlimited chat, profile views, pics, blocks, and the ability to actually unsend unread messages.

The desktop site is always being optimized for easier viewing on mobile devices throughout the world. The team focuses on improving the interface, including things like picture clarity or ease of viewing other profiles.

And once the team has perfected it, Manhunt will be launching an app for Android and iOS, too.

“Getting the mobile app to a great place is our core focus. We don’t want to shy away from who we are, but we want to expand our unique platform,” Alon said. “Since we launched in 2001, we have had a vibe and mindset that speaks to so many gay men. We’re working on enticing a wider audience to learn about Manhunt because it’s such an iconic brand.”

In the meantime, gay guys flock to the site to log on and hook up — because it can be that easy.