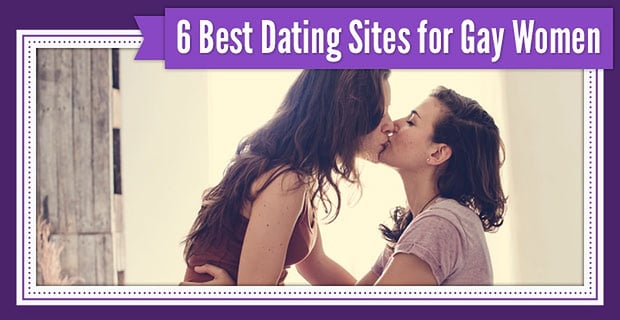 Before one of my lesbian friends met her now-girlfriend, she used gay dating sites and apps for women, and she’d always share her experiences with me — both good and bad. Sometimes she’d chat with a cute gal all night, and other times she’d find her matches were men, couples, or bi-curious women who weren’t serious about being in a lesbian relationship.

Millions of lesbians out there are in the same boat and having difficulty meeting viable local dates. That’s why we’ve written this article to highlight the six premier dating sites and apps where gay women can find each other. (Psst, they’re also free.)

With one of the most diverse user bases of any dating site, Match is our top choice for single lesbians. Match has had over 42 million signups since it launched in 1995, and today the site gets over 39 million monthly visitors. Honestly, you’ll probably never run out of potential dates here. Oh, and did we mention Match is free to join, browse, and flirt? So even if you decide the site isn’t for you, you didn’t have to spend any money to find that out.

If quality instead of quantity is more your style, EliteSingles could be the right option for you. The site doesn’t deliver dozens and dozens of matches to you every day — it just delivers several of the most compatible. That means you can spend less time sorting through gay women you don’t like and spend more time getting to know gay women you do like.

Zoosk is our go-to dating platform for busy lesbian singles because its app is among the best. It doesn’t matter where you are or what you’re doing — Zoosk is always working hard to find the right woman for you. The app will notify you every day of who they recommend, and then all you have to do is like their profile, pass, or click maybe to come back to them later.

Mature lesbians will love OurTime because it’s 100% dedicated to daters over 50. You don’t have to worry about sorting profiles by age, so you can focus on sorting by gender, sexual orientation, location, education, religion, hobbies, and appearance, among other identifiers. When you sign up for OurTime, you’re automatically given a free membership that never expires (unless you delete it), so take full advantage!

Black and biracial women who like black and biracial women should give BlackPeopleMeet a try. Not only is the site free, but it’s also within the People Media family, along with OurTime, which means it’s trustworthy and can get the job done. To become a member, you just have to select a few identifiers like your age, gender, the gender you’re interested in, and country.

BeNaughty is a hookup-only dating site that knows how to cater to the LGBT community. You can browse by sexual interests and encounters, chat live with other users, have private conversations, share photos, and so much more. The most important thing to note about BeNaughty is that the site uses SSL and member verification tools to keep you and your information safe from hackers.

Single Gay Woman Finally Have Dating Sites to Call Their Own

If my friend were single and online dating now, I’d let her know that she doesn’t have to put up with mediocre dating sites or apps. She, along with every other lesbian out there, has plenty of sites to choose from that allow her to identify as herself and that won’t send her male matches. We’ve given you six to get started, but let us know in the comments which ones have worked for you.

We recommend trying multiple dating sites to up your odds of meeting that special someone and starting a relationship that goes beyond the online world. Good luck!

7 Best Lesbian Cougar Dating Sites (That Are Free to Try)