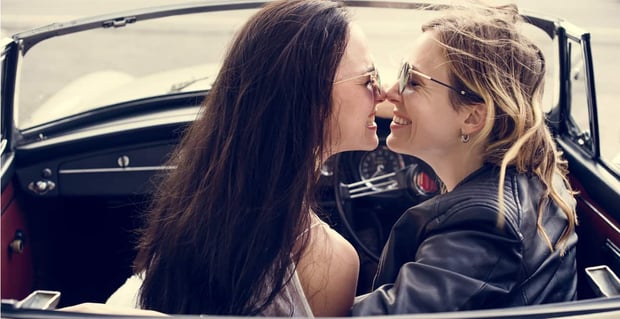 Should I Date Straight Girls?

Before I was willing to admit to myself that I was a lesbian, I recall having many crushes on straight girls because I didn’t know any lesbians. I lived a straight life in high school and university but was craving being in community with my lesbian sisters.

Those straight girl crushes were all I had to sustain my fantasies. I never hit on anyone back then because I was petrified to be found out.

Attraction is normal, though. Many of us have felt some attraction to random women or our friends, even straight ones. What you do with that attraction is another thing entirely, so let’s talk about whether you should date straight women. First let’s get clear on what the word straight means.

Straight Women You May Date Usually Fall Into 3 Categories

First, some straight women are super straight, possibly curious, have little interest in anything permanent, and will always prefer men. Stay away from these women unless you just want a hookup.

Second, some straight girls are closeted and living a straight life and haven’t dipped their toe yet, but they admit to an attraction to women. These girls just need to find the right woman, and that may be you. The coming out process may be challenging, though, so patience is required unless you want to live on the down low.

Some straight women are very straight, some are closeted and living a straight life, and some are bisexual and open to giving a relationship with a lesbian woman a try.

Third, some straight women are bi and will dabble when they meet the right women. Relationships with them could go either way.

Nothing is predictable when you date a straight woman. You may have one date, multiple dates, or even maintain a relationship for years. Ultimately these relationships can end just as a relationship with a genuine lesbian would. If a woman maintains she’s straight, period, then you have been warned if heartbreak ensues.

Why would you possibly want to date a straight woman? I can think of multiple reasons.

First, the available dating pool grows tremendously. More women identify as straight, with that figure well into 90% in some surveys. That compares to about 3.8% of the U.S. population that self-identifies as lesbian, gay, bisexual, and transgender. Secondly, in some circles, it’s cool to have a lesbian best friend with whom you may cross the line.

Thirdly, this presents as a great opportunity to practice your skills and have fun at the same time with no strings attached. Finally, and sometimes it seems fatally, you have fallen for one of your straight friends and you pursue her in hopes of converting her.

Let’s dig deeper into these reasons:

1. More Women are Straight, So Your Dating Pool May Grow

It’s true that straight girls outnumber us. Enter the straight dating world with your eyes open. Ask yourself are you looking to get into a relationship or just hook up. If the answer is to hook up, then have at it. You probably run into many more straight women than lesbian women on a daily basis unless you live in a queer neighborhood.

Surrounded as they are by straight women, lesbian women are enticed by them, hoping that maybe the object of their desire just looks straight. Straight women are cute and feminine, and many of us are attracted to that. They are curious, and you, of course, want to oblige them and show them the ropes.

Since a straight woman may seem unattainable in the long run, you like the challenge of bedding her or relish the excitement of a secret relationship. Why not take your chances that she will say yes?

Decades ago, it was relatively easy to spot a lesbian, at least, if you fit the then-prevalent stereotype: short hair, flannel shirts, overalls, motorcycle, jeans, T-shirts.

Today, we are so diverse, and the lipstick lesbian and makeup-wearing dyke makes it so much more difficult to distinguish gay from straight. Our gaydar is only so effective during a walk-by. Those longer glances and turn-arounds aren’t guaranteed to confirm our suspicions because we are all so preoccupied with our phones these days.

2. The Cool Factor of Having a Lesbian Friend to Hook Up With

Many straight chicks want a lesbian fling. In some circles, it is chic for a straight woman to have a lesbian friend, and getting it on may make her even cooler. Straight women love the attention.

Straight girls will date lesbians for a few reasons. They are curious and want to experience a lesbian lover. Remember Shane in “The L-Word.” She had that boi-ish bravado and detached demeanor that many straight girls find highly attractive. Shane was relationship-averse, so it didn’t matter to her how it ended. She was always getting hit on.

3. Practice Sexual Skills and Have Fun Without Attachment

Dating straight girls can be fun. You can polish your flirting skills and have lots of sex with no real investment on the line. Get good by being bad, so to speak. You keep up your guard, avoid getting attached and just have fun.

Sex is fun, so if you’re just interested in hooking up, go for it.

There’s no need to be vulnerable. Maybe you like the chase and feel accomplished that you can seduce a straight woman.

Be careful, though. You don’t want to avoid commitment because you are afraid of it or are afraid of getting hurt. Maybe you fear commitment and feel safe knowing this relationship is not going anywhere; it’s risk-free and with no strings attached.

And there’s no judgement. Dating doesn’t have to lead to relationships. But just be clear on your motivation.

4. You Think You Can Convert Her

If you’re thinking you are going to convert her, think again. The chances are slim, but sure it can happen. Maybe.

In today’s climate, sexual fluidity is more common and acceptable. Polyamory, bisexuality, and thruples (three in a relationship) are increasing, so there is always a possibility that she is open to a lesbian experience. Even today, with society showing an increased openness, women are still coming out at all ages.

Many lesbian women have reasons for still being in the closet and hiding their sexual orientation from close family members, especially parents. If your seemingly straight friend does end up admitting this to you, she may still not be willing to actually come out.

If you want a relationship with a particular straight girl, you should be prepared to get dumped eventually. They are called straight girls for a reason. They like men and their body parts.

Since most straight women are not closeted lesbians, the chances of developing a deep relationship with them are slim. So why put yourself in that position? If it works out, then you dodged the bullet… at least for now.

So, if you meet a straight girl and want to ask her out, do it. Hey, the worst she can say is no, and hopefully she’s way more flattered than insulted. Be warned, though.

Let’s Look at Some Reasons Not to Date Straight Women

1. You Get a Reputation for Only Dating Straight Women

Your lesbian friends may think this is your MO. Available lesbians may cross you off their list because they think you are not attracted to them. Your dating pool is shrinking.

In most cases, your love interest is straight, and this will likely be a fling for her. She’s not bi and not going to decide she wants to be with you.

Do you really want to put your heart on the line and sit by the phone waiting for a woman who may just be using you?

This is a short-term thing. It may make her seem cool to her friends and guys. If you fall hard for her, this will be painful.

If you are only in this for a hookup and she falls for you, then you have to deal with causing her heartbreak. Be mindful of the inevitable emotional nature of sex between two women and that a connection can develop.

I’ve Had My Own Experiences With Straight Women

A few years ago, a straight woman approached me on a dating site. She was curious and wanted to explore. She was hot and reeled me in. This was finally my chance, I thought!

We did explore, and it was exciting for both of us. In the end, she decided to go back to men. She was divorced and had kids and grandkids, and I think coming out would have been challenging for her.

At first, the end was as difficult for me as any breakup, but I survived. She wanted things that I couldn’t give her. I took the risk knowing it may not work out once her curiosity was satisfied.

Ultimately, we decided to nurture a relationship as friends. Fortunately, my sexual desire for her faded, and we are dear friends today. I am so glad she is in my life.

Lesbian Women I Polled All Recommend Not Dating Straight Women

After polling hundreds of lesbians, over 90% voiced a resounding no against dating straight women. They gave reasons like getting hurt or used, so why chance it. Most of them said they had had bad experiences.

Ten percent had multi-year relationships with straight girls, and a few were married for decades. A particularly memorable piece of advice was, “Life is filled with emotions of all flavors. Don’t be afraid to taste them all.”

No relationship is guaranteed to last, but you should start out on the right foot with a new date. Dating a straight woman is starting out on the wrong foot. It will just cause stress.

Most interesting was the concept of demisexual, which contends that one experiences sexual attraction only after a strong emotional connection regardless of gender. The idea of every woman having some gay in them was tossed around.

It is worth repeating that there are no guarantees in relationships working out, even if you date a confessed lesbian. Admittedly, the risk of the relationship not developing into something serious is greater with straight girls.

Finally, many lesbians maintained that they also were once straight and if it hadn’t been for that brave lesbian who asked them out, they might still be living the straight life.

The decision is yours, but now you have some things to think about.

After two long-term relationships and five years of dating, Pamela Gort, The Lesbian Love Coach, spent years synthesizing the most effective and relevant dating and relationship practices into five easy steps called “Find Her and Keep Her" specifically tailored for lesbians. Using her warm, funny, direct coaching style, Pamela guides single lesbians to fall in love with themselves so they can attract and keep conscious, lasting, and loving relationships.