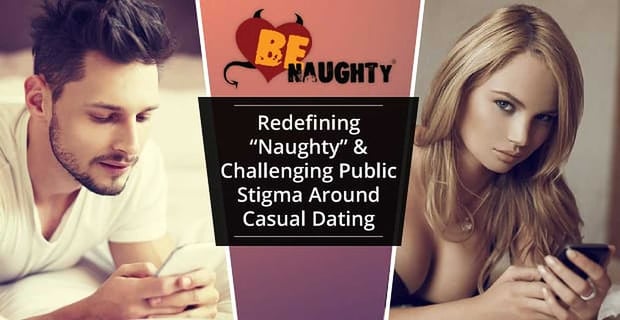 The Short Version: With its tolerant attitude and accommodating platform, BeNaughty.com is taking common stereotypes about hooking up and turning the stigma on its head. BeNaughty encourages singles to stop feeling ashamed about their sexual needs and worrying about what others think — and instead helps them express their desires and meet open, like-minded people in a safe and fun way.

Let’s be honest, not every date is going to be one of those fairy tale ones where you two lock eyes and know you’ll be together for the rest of your lives. To be even more honest, some people aren’t even looking for that, which is OK too. In fact, Paula England, a Professor of Sociology at Stanford University, found the average college senior has between 4 and 7 hookups while in school.

BeNaughty is bringing casual dating to the forefront in a way that’s redefining “naughty,” making singles feel confident — not ashamed — about their sexual desires.

“We think long-term relationships are great, but we recognize and don’t feel ashamed that many people are after something a bit more immediate and want a dating site where they can get straight to the point,” said Vera Bulgakova, Сhief Marketing Officer of Together Networks (BeNaughty’s parent company).

We had a great conversation with Vera and the BeNaughty team recently — discussing everything from their founding mission to address a need in the dating industry to how they’ve made it one of the most popular, safest, and user-friendly sites in its niche.

“While dating at BeNaughty, our users reveal their hidden desires and naughty behavior. That’s why we created BeNaughty — for those who, like us, are open-minded,” Vera said.

Originally built for a U.K. audience, BeNaughty soon expanded into over 30 countries, including the U.S., Canada, and France, and now has 20 million+ members.

“BeNaughty has become a well-known dating brand all over the world and continues to innovate and discover new markets,” she said.

The brains behind BeNaughty is Together Networks, a marketing firm with over 15 years of experience in the dating industry that helps sites establish their brand, grow traffic, and satisfy members. Vera said it’s more like a family than a team, with more than 500 talented developers, PR gurus, and customer support specialists located from San Francisco to the Mediterranean.

“We’re young, creative, and have ambitions to change the world of online dating,” Vera said.

There are a variety of ways to set up a dating site, whether it’s syncing up with Facebook, creating an algorithm that matches singles by their quirky interests, or whatever the latest idea might be. However, if that setup can’t help singles find the right person for them, it’s all for naught.

But BeNaughty has found the right formula: an effective system and impressive — not to mention free — features that can meet every member’s needs, and that’s a hard thing to accomplish when they have an almost even split of men and women ranging in ages from 18 to 35+.

Starting with the search, BeNaughty offers members a variety of filters so they can narrow down exactly what they want, including their preferred sexual orientation, gender, location, and even type of hookup. There are also tons of ways to communicate — from flirty “winks” to suggestive icebreakers to private messaging, one of the most popular features as an average of 8.5 million messages are sent every day.

“Members can find a lot of exciting options to make naughty connections quickly. All the features of the site were created to communicate their naughty desires,” Vera said.

A component we really like about BeNaughty is its very own “Naughty Mode,” which allows members to view a match’s explicit photos and videos and which can also be deactivated at any time.

“This is the whole concept behind BeNaughty — you have the choice to stay nice or try the dark side,” she said.

BeNaughty isn’t just about experiencing the dark side, though. They also take the safety of their members very seriously, keeping scammers off the site by using SSL encryption and requiring members to verify their identity via text or a phone call. And with more than 20,000 new registrations coming in every day, that’s a crucial step.

“Our security system can recognize fraud and scam at the registration step. That, combined with our security policy, which states a member can choose what data to store, makes BeNaughty a safe and secure place to date,” Vera said.

“I have found my match on BeNaughty. He came down for a couple of days recently, and our meeting went well from the moment we met at the airport. He will be visiting me again really soon. I am truly blessed. Thanks again!” — An anonymous BeNaughty member (for obvious reasons)

All of this sums up to BeNaughty being able to reach an 89% success rate and stand out from a traditional dating site, putting users behind the wheel instead of the backseat.

BeNaughty has changed the way people think about dating and how they date, particularly in terms of online dating. It doesn’t just have to be about finding “The One” for all eternity — it can also be about finding “The One” for now. With BeNaughty’s open-minded attitude and solutions, singles can enjoy the perks of conventional online dating while also having the fun they’ve been looking for.

And looking toward the future, BeNaughty will continue to dominate the casual dating space as they expand into even more markets.

“Our main goals are to broaden the horizons of the countries we are not currently present in (Asia, Europe, Scandinavia), to increase the brand popularity in the new markets, and to improve our product. We continue to work hard on enriching and facilitating quality connections at BeNaughty.com,” she said.