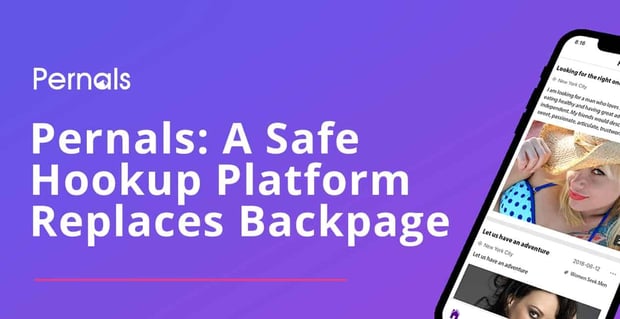 The Short Version: The Pernals app (formerly known as Cragly) has positioned itself as a popular alternative to Backpage.com and Craigslist personals. Casual daters who used to browse these now-defunct sites can enjoy using similar browsing, search, and matching tools on Pernals. This anonymous hookup app keeps things casual and supports online dating without hasslesome swiping features or Facebook logins. Pernals provides straightforward personal ads where singles can be honest about their sexual desires.

FOSTA was intended to hold online platforms accountable for facilitating child sex ads, sex trafficking, and prostitution. As a result, Backpage.com was seized by the FBI, and Craigslist voluntarily shut down its dating personals section out of concern that the company would be held responsible for the illegal actions of some users.

Some social advocates criticized FOSTA by arguing that it did not stop sex trafficking — it merely made sex workers less safe and eliminated some highly trafficked resources for anonymous dating and flirting.

FOSTA has forced many sex personals sites to shut down operations, and that has left a lot of online daters adrift in the adult dating scene. Searches for keywords like “Backpage alternative” increased a hundredfold in March 2018 and demand for a replacement app has been high ever since.

Pernals Co-Founder Alesandra Madison was among those users looking for legit alternatives to Craigslist personals — and coming up empty.

Cragly launched in 2018 and has since been rebranded to Pernals. The founding mission of this hookup app is to provide a safe haven for the casual sex seekers who were booted off their favorite platforms due to FOSTA regulations.

Pernals launched in 2018 to bring greater transparency and security to the online hookup scene. The team is based in San Francisco and has decades of experience in the dating field. Some employees work remotely across the U.S., Canada, and India.

“We are an international team. Pernals is our latest project,” a spokesperson for the company told us. “Our culture is one of focus, hard work, equality, and persistence.”

When Pernals first launched, it offered a 100% free membership that included all chatting features. However, as it grew more popular, the app implemented a paid subscription option to ensure all conversations were between legit people who are invested in finding love.

Dating personal ads get to the point and highlight attractive qualities.

Approximately 80% of Pernals members are from the U.S., Canada, or the U.K. The majority of users are between 25 and 50 years old. These individuals turned to Pernals as their go-to hookup app out of a desire for greater privacy and freedom as they browse for local dates. Pernals does not require users to log in through Facebook or any other social media account.

“Pernals works similar to Craigslist personals. Creating an account is simple and it can be done with one step,” the team explained. “Once the account is created, the user can create a personal ad and send it for approval.”

A single person can browse Pernals under a nickname or pseudonym. The app does not require real names. All that’s needed is an email address, password, and some basic demographic details. Uploading a photo is the last step to completing a Pernals profile. The app does not allow users to post nude photos or pictures of children.

Pernals will review and approve all new profiles and photos before they appear on the app. Offensive content and fake profiles will be removed. Only users with approved profiles can browse for sex ads by city and chat with people. The app doesn’t have a swiping system, meaning users don’t have to send a like or create a match before they can send a message.

“We do not like the Tinder-style swiping,” the Pernals team explained. “It’s too shallow to like or dislike a person by their looks.”

Pernals has seen great success within the last few years. The team has even received notice of a few love stories that started on the app and are still going strong.

“I met the love of my life,” said one former Pernals user. “It’s not just for hookups — if you’re looking for some true connections, you can find people who will mean something to and love you, so I say give it a try!”

Pernals currently boasts an overall 4.2-star rating on Google Play. Both singles and couples have left positive comments about the easy signup and security features.

Users don’t have to play swiping games, jump through hoops, or complete a lengthy questionnaire to join the fun on Pernals. This casual dating app keeps things simple and facilitates real-time connections on demand.

“Thank you for jumping in to take a chance to fill an enormous void,” said an app user with the initials K.S. “As with most anything, if offering quality it simply sells itself. The potential has endless possibilities. The numbers will follow.”

Looking ahead, the Pernals team has plans to continue building its membership base and adding features to the app. The development team is currently working on video chat and AI review functionality to upgrade the user experience and make smart matches easier to come by.

“Member satisfaction means a lot to us,” the Pernals team said. “That is why we are working hard to keep them happy.”

FOSTA was the beginning of the end for shady sex sites like Backpage and Craigslist personals. Days after FOSTA was passed by the U.S. Congress, Craigslist closed its personal ads page. “Any tool or service can be misused,” the Craigslist team said. “We can’t take such risk without jeopardizing all our other services, so we have regretfully taken craigslist personals offline.” A month later, law enforcement officials seized Backpage and shut it down.

In the wake of these two seismic events, the online dating scene had a gap in legitimate services that could facilitate casual hookups without facilitating online sex trafficking. Pernals has effectively filled that gap.

The Pernals app provides a what-you-see-is-what-you-get atmosphere that promises to get results without playing games or supporting illegal activities. The platform has become a safe haven for singles who used to depend on Backpage, Craigslist personals, or another casual dating app to find a nearby date.